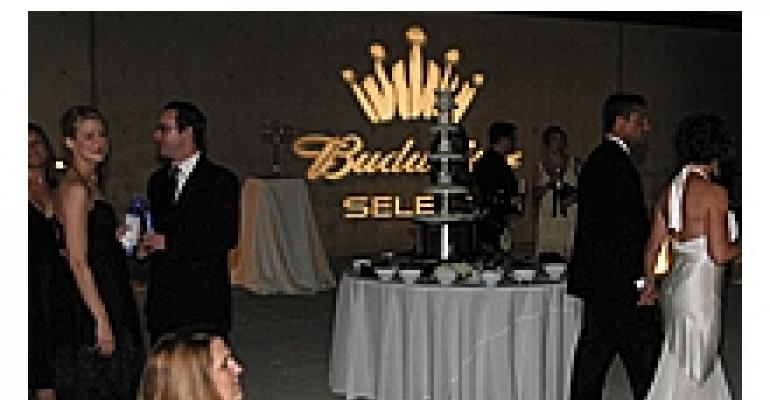 CELEBRITY-driven, elegant events abound in New York and Los Angeles. To celebrate the Fourth of July in the heartland, Synergy Productions managing partner Dr. Amit Dhawan and Contemporary Productions senior partner Sam Foxman brought the glitter of a celebrity gala to St. Louis with the Black and White Ball for client Derrty Entertainment.

“Those of us who grew up in St. Louis have always had a particular fondness for the holiday,” Dhawan, a St. Louis native, explains. “St. Louis has a history of celebrating the Fourth; at one point we had America's biggest birthday party.”

The Black and White Ball — which Dhawan describes as an attempt “to restart the tradition of a signature Fourth of July event” — attracted 400 VIP attendees including singer Ashanti and sports stars Allen Iverson and Evander Holyfield to the black — instead of red — carpet on July 2.

The black-and-white design concept for the night echoed the stark decor of the gala's location, the Contemporary Art Museum St. Louis. Designed by Brad Cloepfil, “who is known for designing in concrete,” Foxman says, “the building itself is grayish white, so the design of {a} black carpet with a black-and-white media wall” immersed guests in the evening's theme from the outset.

The austere, modern venue sparked the idea of featuring an innovative reactive wall as the night's entertainment. “The event was taking place inside a contemporary museum, so we felt we had to have a signature piece at the event that brought everything together, that was a piece of contemporary art itself,” Dhawan says.

Used at high-end spectacles including Cirque de Soleil's “KA,” the video wall — designed by Brian Dressel of Chicago's OVT Visuals — operated as the focal point of the foyer. The video installation projected images that constantly changed in response to guests' movement, an effect accomplished with a heat-detecting infrared camera and a response-producing computer program.

Images including patriotic themes, photos of the ball host — hip-hop artist Nelly — and the “crown” logo of sponsor Budweiser Select appeared and disappeared with a variety of fading effects, dictated by prompts guests provided. “If people stopped and played with {the wall}, it would do more,” Dhawan explains. “It was a very interactive piece.” About 20 effects were programmed into the computer; for example, the Budweiser Select crown exploded into fireworks when someone touched the wall. The evening's entertainment also included performances by comedian D.L. Hughley and the Houston-based Scott Gertner Band.

The decor inside the venue, set up for the performances with a stage, dance floor and intelligent lighting, contrasted with the outdoor patio. On the patio, black-and-white furniture from San Francisco-based furniture store Design Within Reach, set up in diagonals, faced a centrally located white-chocolate fountain. Foxman illuminated the scene with candelabras of varying sizes: “I ordered huge candelabras that we put on different height pedestals for a montage of about 70 candles, all white.” “The candles outside were a good contrast to the light fixtures inside,” Dhawan explains. “Traditional versus modern.”

The highlight of the event for both event team leaders was the “mix of people in the room,” Foxman says. Dhawan credits the lively arrival scene to the rich mix of guests ranging from museum board members to music artists Murphy Lee — member of the St. Lunatics with Nelly — and Janet Jackson. With 12 media outlets covering the event, every arrival elicited a frenzy of photographs. According to Dhawan, guests “started hamming it up,” regardless of their profession, resulting in an environment where “everyone was a celebrity.”