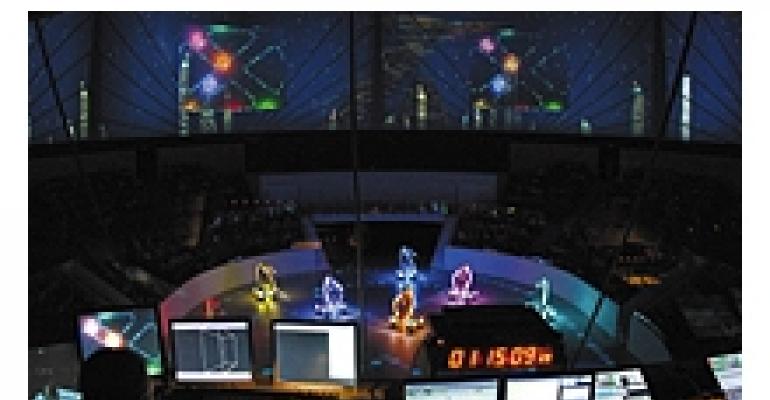 BIG expositions mean big crowds, and big opportunities to showcase a brand. The challenge is making the connection to the consumer in the face of competing exhibitors working hard to do exactly the same thing. Here, three event innovators show how they wow show-goers.

Its reliable, fuel-efficient cars have given Japanese car-maker Toyota an enviable — if somewhat sober — image among consumers. To emphasize its imaginative, progressive side, Toyota hired Paris-based event and spectacle producer ECA2 to create the fantastical Toyota Group Pavilion at the Aichi International Expo in Japan.

The giant expo, which runs March 25 through Sept. 25, focuses on the future in the realm of the environment, sustainable development and new technologies. As many as 15 million visitors are expected to visit exhibits from more than 125 counties.

With Aichi so close to Toyota's home base in Nagoya, the car-maker decided to make a big splash at the expo. The ECA2 team spent two years developing a multimedia theater-in-the-round presentation representing the universe, staged under the 25-meter (82 foot) pavilion ceiling.

Dubbed “Live/Move,” the Toyota show is a “21st century opera,” according to ECA2 spokesman Jean-Michel Louis, blending performers, giant images, special effects and Toyota's most advanced technologies into a futuristic spectacle that celebrates the relationship between the individual, machines and the environment. Twelve “i-units” — futuristic “individuality mobility” prototypes — and the “i-foot” — a robot transporter — interact with dancers and a trapeze artist, all under the watchful eye of technicians. The 21-minute show runs 14 times a day.

The reaction so far has been “amazing,” according to Louis. “The pavilion is always full.” With nearly two months still to go, the event team already has a powerful indicator of the spectacle's success in connecting the crowd to the brand: The Toyota pavilion is the No. 1 pavilion at the expo, and despite the three-hour wait to get inside, “Tickets are now bought through the black market,” Louis notes.

Reaching the crowd at an exposition is important, but reaching influential media is just as valuable.

That was the goal of car-maker Ford for the reveal of its new Mustang convertible at the Los Angeles Auto Show on Jan. 5. Some 220 guests — primarily automotive and local media — converged on the Ford booth at the Los Angeles Convention Center to watch as Los Angeles-based EventWorks capitalized on Ford's existing media relationships to identify the Mustang brand as a classic with a new, younger audience.

In creating the new Mustang, which made its debut at the show, Ford took its iconic '60s brand and revamped it for today's customer. Keying on the fact that Ford is a major sponsor of hit TV show “American Idol,” EventWorks made the most of the connection for its L.A. Auto Show reveal by using a recent “Idol” contestant — Diana DeGarmo — who appeals to a younger audience. For the reveal, newbie DeGarmo sang the classic '70s Doobie Brothers song “Rockin' Down the Highway,” a tug at the hearts of both young and middle-aged audiences. “Diana's performance personified the new Mustang,” says EventWorks marketing director Dave Kuhla, “a new take on an American icon.”

The event captivated the media. “Ford dominated the media coverage of the L.A. Auto Show,” notes Kuhla. Based on data from an independent media tracking service, “The new Ford Mustang was the most written about car and the most photographed,” he says, not only in trade media, but also in local news programs.

“For this type of event — a media reveal — the special event is a great way to re-brand and reposition a product,” Kuhla adds. “This is a package show designed for the media to garner coverage, and the ultimate tool of re-branding is media coverage, whether it be paid advertising or a spot on a local news segment.”

Not all events at exhibitions are designed to dazzle. Instead, some aim for a more subtle message. Case in point: The inviting environment created by New York-based PurePartner by Design for the 60,000 attendees at the Electronic Entertainment Expo (E3) in Los Angeles in May for client Microsoft's new Xbox 360 game and entertainment system.

Fighting the traditional image of the gamer as a loner, PurePartner by Design reimagined the trade show booth at the massive Los Angeles Convention Center as a public space designed for congregation and the exchange of ideas. “The gaming industry is evolving to become a much more socially acceptable practice; there are a lot less closeted gamers these days,” notes PurePartner partner Chris Pollard. “In general terms, an Xbox gamer is first and foremost highly individualistic, but feels a sort of camaraderie with other individuals who are very into self-expression, and finds a common bond there.”

To create a space where these individualistic gamers could come together, the team treated the Xbox booth as a “Central Park” in the midst of a “city” of other booths. Using a circle motif and green as the dominant color, the “Greenspace” featured a 24-foot entrance portal punctuated with 42-inch plasma screens and 4-foot display portals communicating the evolution of the new Xbox 360 system. The main gaming floor was landscaped with four custom-designed gaming stations, with a VIP lounge overlooking the 35,000-square-foot environment. The “Aviary” theater was an upholstered environment allowing attendees to relax and listen to music on wireless headsets as if sitting on a grassy hill in Central Park. The “Pipe” featured a row of screens playing comments from gamers attending E3.

The Greenspace booth was a tangible expression of the capabilities of Xbox 360 and the lifestyle it represents. Pollard notes with pride, “At a pivotal point in the brand's history, we were able to intelligently dimensionalize the brand.” The bustling show environment proved the perfect place to debut the new product. As Pollard puts it, E3 was “the premier opportunity for Xbox to put a face on itself.”