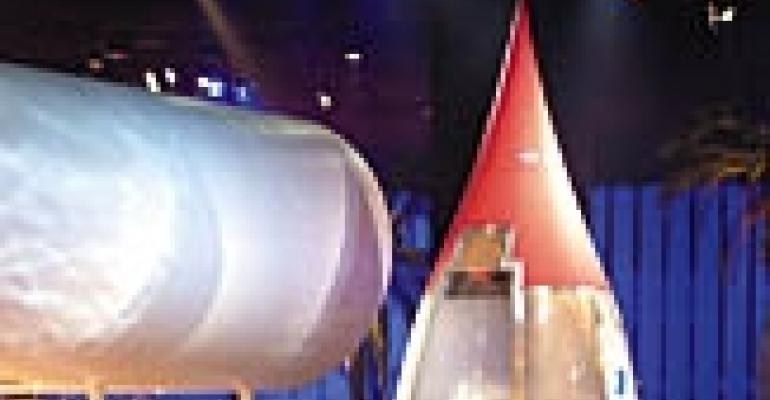 NOTHING ADDS ZING to a corporation's trade show presence like a live — and often very lively — special event. So say design pros along with their savvy marketing and communications counterparts, who note a major upswing in demand for brand-building, sales-boosting, press-impressing show events.

A background in designing interpretive environments for museums has factored into MICE iCom's design of experience-based trade show events, according to company president Bill Callejas.

One application of this design expertise has been the New York-based company's creation of trade show stands that function as live events. Callejas says looking at the client's trade show presence as an event in itself — complete with hands-on activities, multimedia displays and celebrity entertainment — comes out of an increased demand for high-impact branding.

Among his clients, which include major high-tech and media companies, “We're seeing more close work between marcom people and trade show people,” he explains. That's a far cry from as little as five years ago, when exhibition divisions typically thought about trade shows in terms of, as Callejas puts it, “‘How much business can I write? How many brochures can I give out? How many attendees’ badges can I swipe?'”

As the result of a new concept of the trade show as something that “may actually define for a critical audience what the company is about,” Callejas says, MICE has been responding with stand designs such as the 24,000-square-foot “experience” the company created for client Sony PlayStation at last year's ECTS interactive entertainment trade show in London. The multi-zone space, which was visited by 24,000 attendees over four days, included a main stage featuring pop singers and dance performances, a demonstration of a new PlayStation racing game where users could talk one-on-one with Formula One racing star David Coulthard, and a basketball court where celebrity hoop pros helped boost the profile of PlayStation's interactive basketball games.

With the financial outlay required to produce such high-energy exhibit events, clients are looking to get the most out of their investment. Callejas says MICE is heeding the call by offering scalability: The company designed the PlayStation presence as a traveling show — which moved to more than 15 European cities after its London launch — transforming into a consumer- rather than trade-based event in many of the locations. MICE also is focusing on ROI with such services as database integration, which allows clients to maximize their audience strategies, and software to manage customer relations, which lets clients track event attendees over time. “With those clients for whom there is a much longer sell cycle, this has become much more important,” he says.

In the high-stakes arena of automotive exhibition marketing, events are key to generating the media coverage craved by the clients who host them.

London-based Imagination Ltd. has seen the production of live exhibition-related events go far in fostering successful relationships with its automotive clients. One example is the 25-year association the communications company has sustained with client Ford Motor Co. As part of the contract it has held since 1998 to provide Ford with strategic direction and exhibition design services, Imagination unveiled Ford's event-style stand at the press launch for May's Birmingham Motor Show, in Birmingham, England. According to group account director Chris Marsh, the stand itself was designed to promote a marketing association between Ford and Universal Pictures, which was gearing up for the release of its new film, “Thunderbirds,” in July.

In more than 22,000 square feet of space, the company installed a 2,500-square-foot lagoon and accompanying sandy beach designed to evoke the film's set, and a nearly 50-foot-long model of a Ford Thunderbird 2. Another event requisite — the exclusive upper-level VIP area — also was part of the experience.

“Once the theme and association [between Ford and Universal] were announced, the buzz around the media was immense, and created a huge amount of free publicity,” Marsh notes. Not only that, he adds, but “Creating a live show on the stand also provided a huge draw once the visitor was at the [exhibition].” Such events succeed, he contends, by “giving the client two hits for one investment.”

Held on a public street outside the Messe Frankfurt exhibition center in Frankfurt, Germany, in association with Audi's presence at the 2003 Frankfurt Motor Show, the Max Sense-designed event started press tongues wagging with its closure of a city street for a full 45 minutes (with official approval, of course). With 1,000 media members in attendance, car racing demonstrations and displays of rare and historic race cars attracted further attention, while “the casual meeting setting, with a ‘pit stop’ atmosphere next to the race cars, served wonderfully to generate contacts,” says Max Sense general manager Ulrich Wuensch.

Noting that on its own, “a stand at an exhibition is a static affair,” Wuensch estimates that 80 percent of his clients decide to stage some kind of live event in conjunction with their trade show presence. To help them gauge the effectiveness of such events, he adds, Max Sense has developed its own proprietary ROI measurement tool, called “max result,” which measures standard indicators such as audience numbers, contacts established and duration of stay. In addition, Wuensch explains, max result helps clients measure less quantifiable, but no less significant factors in assessing an event's overall branding impact — an area the company calls ROE: “return on emotion, experience, engagement,” he says.

While high-impact branding experiences are an essential part of the show-related event market, sometimes it's the lower-profile event that can best serve the client's needs.

One international company, PGI, has created an entire division devoted solely to “in conjunction with” events — from off-site receptions to intimate dine-arounds — that aid trade show exhibitors in reaching both prized and prospective customers. Benny Harrell, group vice president of PGI's two-year-old, New Orleans-based ICW events division, says recognizing such events as a “distinct vertical market” has allowed his group to cater to the specific logistical requirements of trade show clients. As part of PGI's Destinator destination management service, Harrell's ICW group tracks major trade associations and learns their exhibition rotation patterns. Armed with information about where the association will exhibit for the next seven to 10 years, Harrell's team is well-positioned to pursue repeat exhibitors and offer them such services as advance site selection for off-premise events.

Once exhibitors become regular ICW clients, “We learn culture, what works and what doesn't work, so we're not reinventing the wheel from year to year,” Harrell says. From there, it's a matter of learning specific objectives and customizing events. Sometimes the required event will be on the scale of the splashy bash PGI ICW did to promote a company merger for client Securitas, which exhibited at the American Society for Industrial Security show at the massive Louisiana Superdome in 2003. Often, though, it is something as cozy as dinner in the private room of an exclusive restaurant in the vicinity of the conference center, where, with the distinct aid of fine food and drink, “sales and marketing staff have direct contact for a number of hours with their best clients or clients they're trying to reach,” Harrell says.