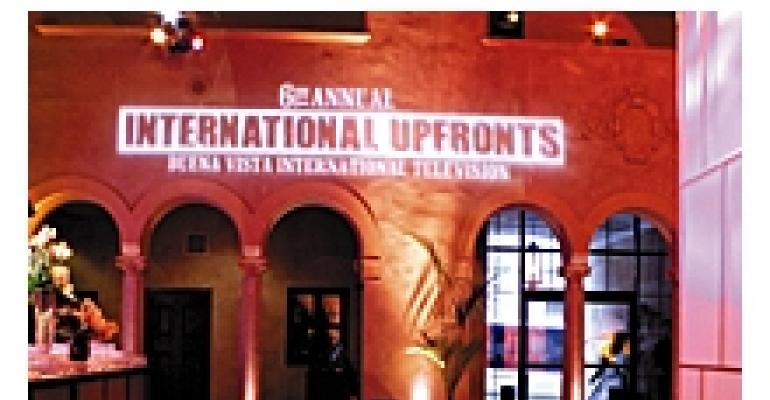 The evening began with a sales presentation to 1,200 potential buyers at the El Capitan Theatre in Los Angeles. Harris cites the fact that “most people don't think” the way he does when explaining the “totally different” staging of this show from those of years past. Instead of using the movie theater's video screen, Harris created a stage to serve as the focal point of the presentation. Made of a milk-colored opaque material called Coroplast, which richly reflects the color of the light shined on it, the stage changed color from red to blue to pink throughout the presentation.

For cast members of successful Buena Vista shows “Lost,” “CSI,” “Desperate Housewives” and “Grey's Anatomy,” the event team crafted an upscale, elegant lounge inside the lobby of the neighboring “Jimmy Kimmel Live” studio. The stars of the featured TV shows, there to add sparkle to the event, relaxed here before and after their appearances. Live feed on TV monitors provided close communication with the action at the El Capitan, which was vital to ensure that the 200 celebrities and VIPs knew who was onstage and who was appearing next.

For the third venue of the night — the Hollywood Roosevelt Hotel, located just a block from the El Capitan — the event team transformed the first floor of the 1920s-era landmark through dramatic lighting.

With a 75-person crew and only 12 hours for setup, Harris was able to turn the hotel's hip Dakota restaurant, Blossom Ballroom, lobby and north garden into “something never seen before,” Harris says.

Light was also key to ensure flow throughout the roomy venue. Orange gobo projections played over the structure. As Harris puts it, “A lot of moving lights kept people moving.”

The variety of rooms gave guests yet another reason to stay on the move. Harris' crew revamped the Dakota by moving out all of the furniture, leaving only white leather benches. With new custom pillows and cocktail tables, Harris says, the new lounge had guests who had been to the hotel before asking, “Is this the same restaurant?”

Smooth flow was also necessary for the success of the headline act: an appearance by Lionel Richie. Unable to squeeze all the guests into the Blossom Ballroom, where Richie performed, Harris installed 50-inch plasma screens throughout the venue, including outdoors. Before Richie took the stage, the screens presented a looped reel of the TV shows showcased at the beginning of the night. Later, the TVs broadcast Richie's hour-plus performance with a live feed. Harris cites the success of the concert as the highlight of the event for him personally, saying, “We were blown away by Richie's energy.”