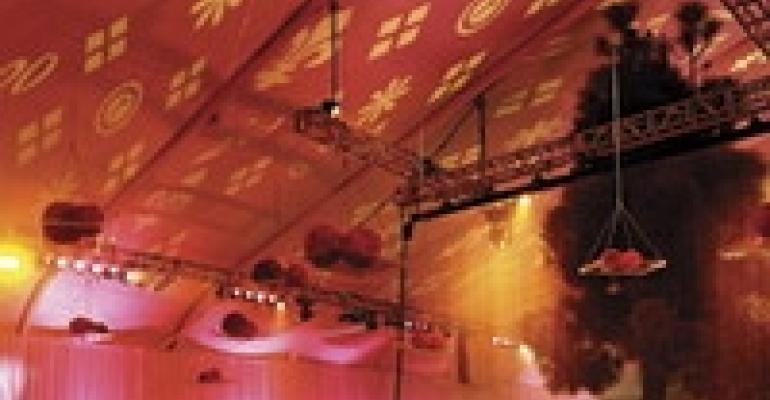 One difficult venue, two consecutive nights, a thousand-plus tough-to-please guests. What's a production company to do? In the case of Laguna Niguel, Calif.-based Elite Productions, tasked with creating two events for client Roth Capital Partners as part of its conference at the Ritz-Carlton Laguna Niguel, the answer was as simple as black and white.

Not only did the February events share a single, inauspicious site — a public parking lot next to the conference hotel — and many of the same guests, but the parties also came burdened with this client command: “‘In order to save money, let's utilize the same furniture from the first to the second night,’” recounts Elite president Lili Shadab.

A 100-by-195-foot main tent from Classic Party Rentals took care of the first of Shadab's challenges — making the low-profile lot a place where high-energy 20- to 50-year-olds would actually want to party.

Next came the problem of perfecting a design scheme that would offer the flexibility to reuse seating and decor elements from one evening to the next but in two totally different contexts. Shadab says she opted to “create two beautiful lounge spaces” for the two nights, each distinct in palette and furniture configuration and each keyed to the vibe of that night's headline entertainment. The first night showcased youthfully raucous good-timers Good Charlotte and the second starred British rock veterans The Cult.

For night one, Shadab went with a sea of white, from tent lining to furniture coverings. Lighting splashed the pristine interior with washes of fuchsia and tangerine, while additional color accents came from bright banquette bolsters and suspended plexiglass trays bearing oversize floral balls.

On night two, the same furniture was back — but this time in black. Shadab rearranged the setup and reinvented previously used soft-seating pieces with black slipcovers accented with touches of French damask, all washed with deep blue and purple lighting in place of the previous night's brights. Using the same rigging points they had the night before, she and her crew traded out plexi-and-pomanders for moody smoked-glass trays and driftwood chandeliers dripping with light-catching crystals.

For Shadab, the secret to success lay in determining not just what to change from night to night, but what merited an encore performance.

In addition to the headline acts, for instance, roving entertainment was a surefire crowd-pleaser and a great way to persuade attendees tempted with other party options to stay and play. On both nights, gorgeous go-go dancers — dressed in “schoolgirl groupie outfits” on the first night and in underground-vibe black and purple on the second — brought smiles to the faces of the male-dominated bunch.

Also on hand both nights was the famed In-N-Out truck — a traveling version of the well-loved California burger chain. Rounding out small-bites menus catered by the Ritz-Carlton on night one and Solana Beach, Calif.-based Pamplemousse Grille on night two, the truck served up piping hot “double-doubles” and fries.

Of course, without a great disguise for the parking lot that people were partying on, neither the hot burgers or even hotter dancers might have made a difference. Shadab says she didn't just conceal unsightly features such as parking fee pay stations on both nights but actually turned them into decor display stands by covering them with custom-made hollow columns. Meanwhile, the parking lot's trees got dolled up with luminous lighting. “People thought they were part of the design,” Shadab recalls. “They were saying, ‘How the hell did you get those trees in here?’”

Some of the two evenings' challenges — among them the time-consuming and documentation-intensive permitting and insurance pro-cedures required for use of public land — could not have been avoided, Shadab says. Others might have.

Shadab explains that her greatest difficulty came from not having a definitive venue selection from her client until less than two months out from the event. “If I had it to do again,” she notes, “I would insist that my client make a decision sooner.” That said, Shadab says that the long wait for a site was worth it. The parking area's location, so close to the conference hotel, meant that most guests could simply walk across the street for the festivities, minimizing the need for extensive shuttling and maximizing the chances that attendees would stick around for both parties.

All things considered, the veteran producer says, everything went well on both event nights. Having an airtight on-site plan helped ensure that, she adds. “Something that's been proven to me after so many years of doing this is how important communication is, asking everyone what they're doing so we're all on the same page,” she says. “What saved us was our production schedule.”