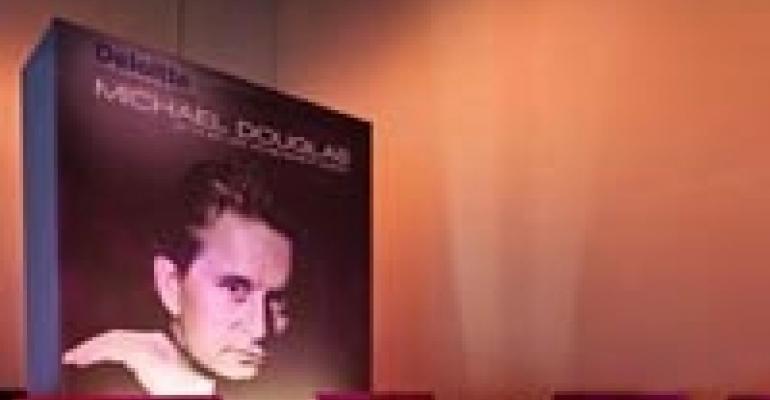 It takes more than a slew of big-name celebrities to make a blank space beautiful. Jason Wanderer, head of Precision Event Group in Beverly Hills, Calif., can attest to that.

For the 37th American Film Institute Life Achievement Award, Wanderer had some serious celebrities to wow in a seriously bare-bones space. So he created a casual-yet-sophisticated June after-party that focused on honoring actor Michael Douglas for his contribution to American culture through film.

Even with the Hollywood star factor, planning the party had some less-than-bright spots. For starters, the award ceremony's eight-year stint at the dramatic Kodak Theatre came to a close this year with the permanent installation of a Cirque du Soleil show at the venue. Before even selecting an event designer, AFI had to shop around for a new space for both the ceremony and after-party, traditionally held within walking distance of each other.

The search led AFI to Sony Pictures Studios' soundstages in Culver City, Calif., typically used for TV and movie sets. Because the blank spaces were a far cry from the nightclubs loaded with furnishings and lights that had served as after-party venues in years past, AFI decided to farm out the production of the party for the first time. Precision proved a natural choice thanks to its experience throwing events at Sony, such as the MTV Movie Awards post-party.

Not that just any soundstage would do. After examining the budget, the stage's distance from the ceremony — Wanderer wanted guests to walk less than 100 feet — and the space necessary for a guest list of 800, he settled on Soundstage 8. “In a ballroom you might use extra space because it's there, but here, every extra foot has a dollar calculation to it,” he notes. “Every extra foot needs carpet, draping, light, furniture — if not, it's just completely barren.” No. 8 was spacious enough to accommodate guests without being too spacious. After all, more space meant more wood-plank floors and walls to cover — and more money spent.

Next, the team went about covering every surface — the floors with chocolate carpet and the walls and ceiling with cream spandex drapery — to make it fit for the fête. And despite the event's healthy budget, this wasn't a free-for-all spending spree. Instead, Wanderer kept prices in check via creativity. With AFI's approval, Wanderer requested enhancements to some vendors' services and in exchange gave them tickets to the high-profile ceremony, which started at $3,000 a pop and included the likes of actor Jack Nicholson, director Oliver Stone and Douglas' wife, actress Catherine Zeta-Jones. So when audio and lighting fell within the budget but video did not, Wanderer paid the budgeted amount and compensated the vendor for the extra video with tickets to the ceremony.

It was a deal well worth striking because, as Wanderer puts it, the video was “the cherry on top of the sundae.” It depicted images of AFI Life Achievement Award honorees of the past 36 years, from last year's recipient, actor Warren Beatty, to legendary director Orson Welles. More than a dynamic decor element, it also “provided a historical perspective of the event, [showing] the great men and women who had previously been celebrated,” Wanderer notes.

For the rest of the space, Wanderer opted for subtle, not showy. He wanted to veer away from the “typical white-leather couch Hollywood after-party with lights all over it,” he explains. So he went with warm earth tones for a sophisticated, regal feel. He avoided large focal-point centerpieces as well and instead chose subdued classic white floral. Amber lighting added softness, and ambient prerecorded background music kept the noise level low and socializing easy. “We didn't do anything that had shock value,” he says. “We really wanted the evening to be about Michael Douglas.”