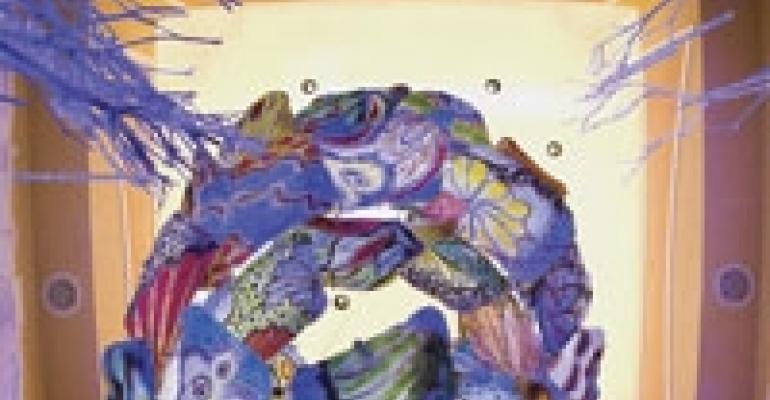 Baby, it's cold inside. When Dan Vazquez, CMP, president of Miami-based AOM Events, was tapped to design an 18-day holiday showcase for the Seminole Casino Coconut Creek, located in Coconut Creek, Fla., his directive was to “create a holiday experience without it looking like holiday decor,” he says. So Vazquez and team created an enchanting “fantasy wonderland,” drawing on the magical feel of the holiday season but leaving the candy canes and reindeer behind.

Throughout the duration of the event — which ran Dec. 12-28 — an estimated 10,000 guests were welcomed into the casino via a 120-foot entrance hall dripping with “icy” spirals and 4,000 strands of sparkling beads. The gnarled white branches of manzanita trees contributed to the “eerie winter” effect, Vazquez notes. The fantasy theme spilled over into the casino's Nectar Lounge, where casino management held its annual “Sweet Dreams” event — featuring celebrity chefs such as Food Network's Ted Allen and Keegan Gerhard — every weekend throughout the holiday showcase.

To create the feeling of being in an “other worldly” winter wonderland, Vazquez sent a semi-truck across the country to San Diego to pick up the manzanita trees, a move he says was “expensive but necessary” as they are the only trees that could have created the effect he wanted. To heighten their dramatic look, the trees were coated in gleaming white paint and draped with white fabric and feathers.

As guests entered the casino over an 80-foot bridge built by the design team, they moved through the tunnel of tree limbs, suggesting both the harsh and soft qualities of winter. The design team splashed icy blue lighting across the trees. Since the lights had to be on night and day throughout the duration of the event, the team used low-energy LED lighting, which was “the only way to ensure a ‘green’ environment,” Vazquez says.

Every great artist has a muse; for Vazquez and his design team, it was the casino's chandelier — a spiraling centerpiece in the entrance hall that was “instrumental” to the event's spiral motif, Vazquez says. The team created light-catching jeweled metal spirals, which dangled from the ceiling and rotated continuously for the 18 days of the showcase.

Vazquez credits his team's ability to pull off such an elaborate, long-running design scheme to the “cutting-edge” casino staff, which “trusted us enough to allow us to drill a hole through their main entrance for power to be piped in.”

As is common these days, the event team had to work on a skin-tight schedule. The casino spectacle was completely designed and fabricated — and installed in a mere two and a half days — by the AOM team. Because the casino is open 24 hours a day, seven days a week, the team could load-in only between midnight and 8 a.m. Installing the 16-foot-wide entrance bridge presented its own set of challenges: Because the casino is a public place, the bridge had to be built according to Americans with Disabilities Act regulations, complete with ramps.

According to Vazquez, the “massive undertaking” was well worth it. “Being able to transport guests into a fantasy experience was amazing,” he says.