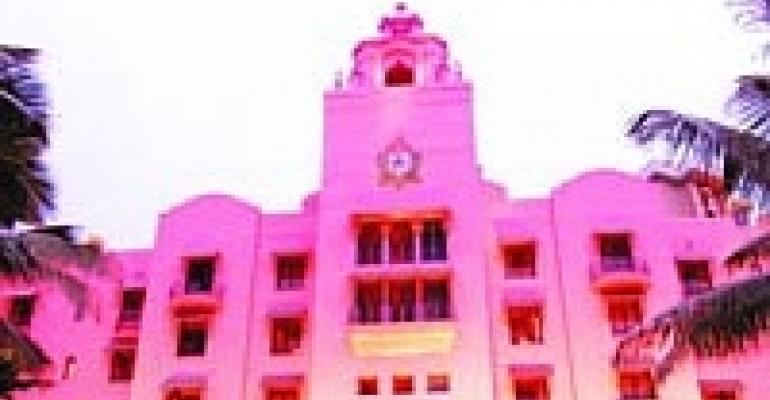 When Honolulu's iconic Royal Hawaiian resort needed an event planner for its March grand re-opening, “the magic of the Internet” led management to New York's David Beahm, he recounts. And when Beahm needed a tag line for the event, he looked to the hotel itself. In honor of the resort, known as the “Pink Palace of the Pacific,” Beahm opted for a concept he calls “pink is the new fabulous,” making full use of the setting while dialing up the pink a notch.

Still, even “fabulous” needs a budget these days. The 1,000-guest event served the dual purpose of resort re-opening as well as fundraiser for the city's Rehabilitation Hospital of the Pacific. So Beahm, founder of David Beahm Design, had to convey the luxury of the hotel while creating an event that was lucrative for the hospital. With deft planning, he produced a gala that celebrated Hawaiian culture in fabulous style without frivolousness.

For the celebration of the “pink grande dame's face lift,” as Beahm calls it, pink was a natural decor choice. Lighting, linen, staff uniforms, a Hollywood-style pink carpet — in lieu of red — and a surprise show of pink fireworks rounded out the go-to color's offering. The cocktail created for the evening, “Pink Blush,” also highlighted the color with a mix of vodka, cranberry juice and Grand Marnier.

But the event wasn't just a one-hue wonder. Beahm included pops of orange “because all pink would have been too much,” he says. The floral, for example, was primarily an indigenous mix of local plants, such as orchids, with roses to supply a mix of pink hues with touches of orange.

Much of the decor kept working even after the event ended. Many hotel departments allotted a portion of their budgets to the purchase of items they could reuse at a later date, Beahm says. So votive candles, lanterns and signage bought for the party remained on the property for future use.

Vendors, too, played a vital multifaceted role. Beahm asked for “deep discounts” from sponsors and, in exchange, provided those companies with “the publicity of being our chosen vendor on such a huge night for Honolulu.” To avoid relying on one company too heavily, he selected multiple vendors for music, floral and liquor. However, one sponsor did provide “extreme cachet,” according to Beahm. Louis Vuitton Hawaii supplied contemporary and historical travel pieces that added a swanky focal point to decor.

The local culture provided its share of inspiration too. The Royal Hawaiian is built on property that was once “the playground of the kings,” Beahm relates, so he had to tread carefully. In other words, no plastic grass skirts — considered a tourist gimmick — and no drumming and fire dancers, which would cross the line into sacred ritual rites, he says.

Instead, locals in native garb greeted guests. For the men, this meant loincloths, while the ladies sported print skirts, with leis and long hair instead of bikini tops. As Beahm says, “I asked for authentic garb, and I got it!” Greeters blew into conch shells, a traditional Hawaiian greeting; the Hawaiian Royal Guard directed guests; and local children serenaded partygoers with ukuleles. As a clever callback to the original opening of the Royal Hawaiian, 101-year-old Bill Tapia played his ukulele, just as he did for the event in 1927.

While the remote locale had its local charm, it also provided challenges. “Who knew Honolulu was the last port when receiving shipment via Pacific Ocean?” Beahm says. If he had to do it over again, he'd push for decisions and orders to be made faster. “Many things arrived just in the nick of time,” he says, “and some are still floating around out there … somewhere.”

A Barbie Bridal Shower Gets All Dolled Up