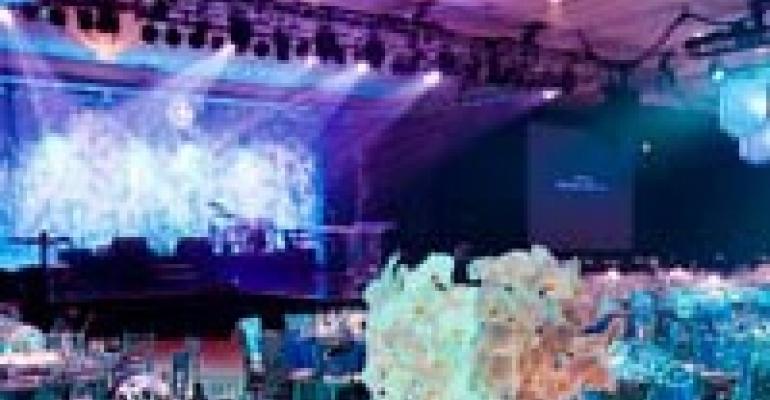 Can the decor at fundraising galas add up to both dazzle and donations? In the hands of these top designers, the answer is yes.

While the recession didn't eat into the budgets of fundraising galas as badly as it did corporate events, “Budgets have remained flat with some [gala] clients and have started to inch back up with others,” notes Julie Hale.

This means that Hale — head of Tacoma, Wash.-based Vangard Inc. — must continue to deliver design drama without dramatic dollars for her gala clients. “The fundraisers we design have a strong core concept of offering unforgettable events that are high profile and carry a goal of increased revenue year to year,” she explains.

A prime example: the annual Dreambuilders' Ball, which once again raised more than $1 million in May for Seattle's Virginia Mason medical center.

The big challenge: coming up with something new each year. “We have been with some of our gala clients for a full decade and have run the gamut on themes, looks, colors and entertainment concepts,” Hale says. “This is one reason that we begin the process almost immediately after the current gala has wrapped, giving us a full year to design an event that will be truly one of a kind.”

David Stark has proven a master at creating gala decor that does triple duty. Not only are his designs visually arresting, but they also convey the core message of the gala sponsors and yet remain budget-friendly.

A case in point: When the American Friends of the Israel Museum wanted to commemorate a new sculptural water feature on the museum's grounds last fall, the New York-based Stark team turned to water-filled glassware to create gleaming walls.

“We were inventive about the way [the water] was used in the glassware,” Stark explains, “by playing with the levels that the glassware were filled to, the illumination quality that the vessels and water created, and the sheer volume and scale used throughout.” And of course the design team could afford to go big: “The water itself had no cost,” Stark notes.

Imagine an event where the decor itself helps raise money. The team at 360 Design Events can — and did.

For the Children's Museum of Manhattan gala last year, the New York-based 360 team riffed on the European tombola raffle, where guests reach into a revolving drum to draw out “tumbling” raffle tickets.

“We wanted to bring a fantasy to life,” explains creative director Matthew David Hopkins, developing “a way to build excitement for beautiful gifts that guests could win, while at the same time contributing to the mission of the museum.”

And the design team did just that, creating a wall of “tumbling” presents. During the 45-minute cocktail hour, the entire wall sold out at $100 a ticket, yielding another $20,000 for the museum.

WHAT PAYS IN VEGAS

Las Vegas may be famous for gambling and glitz, but add “generosity” to the list, too. And few in town are as busy designing fundraising galas as the team at MGM Resorts Events.

Both were events on a grand scale, mixing oversize decor, moving staging, and saucy, showstopping entertainment. The Michael Jordan event, for example, included a “candy girl” in a bra made of cotton candy and a huge video chandelier that descended toward the floor to serve as a 24-foot-round dessert buffet.

“Because so much of what we do takes place in ballrooms — they are the dominant event spaces in Las Vegas — it is important to focus on complete transformation of the space whenever possible,” Dahl explains. Put more simply: “Interactivity, living decor, drama and theatrics!” he says. “That's the way I roll!”