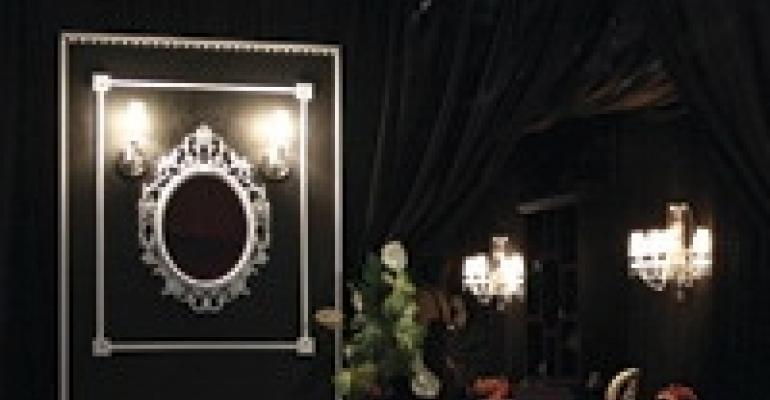 Transforming raw office space into a society-worthy soiree might have given even legendary debutante-turned-designer Dorothy Draper pause. But Fort Lauderdale, Fla.-based DMC Createabilities followed Draper's advice that decor should be fabulous and fun. For a February fundraiser celebrating both the 50th anniversary of the Fort Lauderdale Museum and the launch of its “Dorothy Draper, America's Most Fabulous Decorator” exhibit, the event team “Draperized” the space.

Draper took the mid-century design scene by storm, setting the signature look of landmarks including New York's Hotel Carlyle and Washington's Mayflower Hotel. To capture her over-the-top style, the Createabilities team studied Draper's designs and philosophy. Julie Calderon, Createabilities' business development manager, says she drew inspiration from conversations with Carleton Varney, the owner and CEO of Dorothy Draper & Co. and a legend in his own right. Varney lent original Draper pieces from his own collection to “execute an authentic Dorothy Draper look,” Calderon notes.

Along with original items, the event team used furniture from the Kindel Furniture collection, which features a line inspired by Draper's designs. Create-abilities fashioned custom linen and napkins in Draper's favored bold florals, mixing them with solid pink and black tablecloths and black chiavari chairs.

FROM DRAB TO DRAMATIC

The big turnout — some 500 guests — expected for the gala meant the museum itself could not serve as the venue. Stuck with a tight budget, the event team said “yes” when the donation of 12,800 square feet — the entire 16th floor — of unfinished downtown office space for the event came through.

The Draper-style furniture pieces and bold color scheme helped transform the cement floors and concrete-block walls into a glamorous party setting. To fill empty corners, the event team turned to donated furnishings from a local furniture company even though the style “had nothing to do with the look of Dorothy Draper,” Calderon says. Black drapes closed off vacant areas, so “attendees would never have known it was raw space,” Calderon says. The stage for the band was outfitted with furniture and lights keeping with Draper's design, Calderon says, “and we did a lot of black panels with molding on them, which is very Dorothy Draper-esque.”

When guests, including members of prestigious local corporations and patrons of the arts, stepped off of the elevator and into the event space, “They had the feeling that they were walking into a Dorothy Draper-inspired home,” Calderon says. Wall draping accented with floral tiebacks flanked each entrance, and special flooring resembled Draper's signature black-and-white tile. Red and white chairs — original Draper pieces from Varney's collection — a hutch and chandeliers “re-created a Dorothy Draper living room and stayed true to her vision,” Calderon says. “Her sophisticated designs live on.”