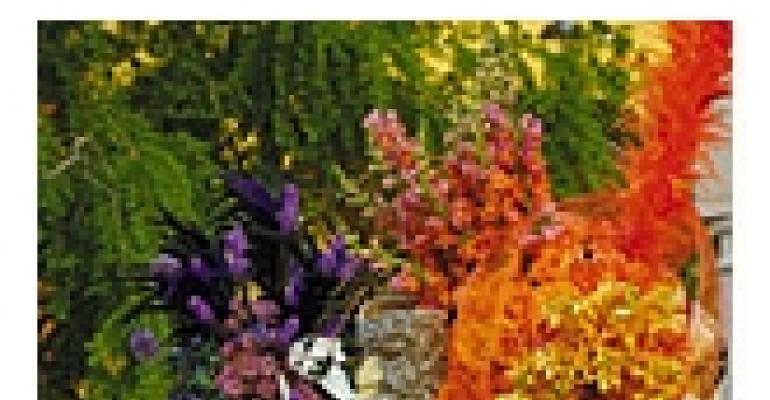 A lush oasis welcomed 450 tired guests of a corporate incentive program to the Ritz-Carlton Lake Las Vegas Resort in April. Dania, Fla.-based Designs by Sean, producers of the Gala Award-nominated event, provided the hotel lobby's restful, green-hued arrangements. Owner Sean DeFreitas explains that the kickoff event for four days of festivities was technically located in an outdoor area by Lake Las Vegas. However, DeFreitas decided to “start the journey in the lobby” with multifaceted floral arrangements featuring artichokes, wheat grass and orchids. Because the guests arrived at the hotel and headed straight to the event, “We wanted to set the tone as the guests walked in the door,” DeFreitas relates. “And we didn't like what the hotel had.”

Providing the hotel's lobby with green, white and brown arrangements to complement the desert view and existing color scheme was one way the event team worked with the hotel's natural ambiance by accentuating its elements with carefully chosen floral decor. When choosing the event's theme, DeFreitas drew on the fact that the outdoor space, called MonteLago Village, has what he calls “a sort of Italian feel” to its architecture. Believing that “a space, most of the time, will dictate so much about the event,” DeFreitas explains, he did not try to force the area to fit a preconceived theme but settled on the Italian- influenced “Venice in Vegas.” Linen “with an Italian, Baroque feeling,” DeFreitas relates, in bright orange, blue-violet and hot pink provided the color scheme.

Because the venue comprised three distinct areas, DeFreitas assigned a bold color to each zone and used lavish flower arrangements to further the festive nature of the event. The hot pink area was adorned with pink spray roses and pink parrot tulips, while the blue-violet arrangements included purple sweet peas and hyacinths. Tiger lilies and orange snapdragons were among the bright blooms featured in the orange area's arrangements. Using color to accentuate the space's natural delineations prevented the event from becoming “a mishmash,” DeFreitas notes.

While vivid colors pleased the eye and defined the space, the texture of the various arrangements also added interest. “A good way to look at flowers,” DeFreitas says, “is [both] for individual beauty and when they are clumped together.” So carnations made an appearance in the floral pieces by the fountains. “I always say, ‘I wouldn't be caught dead using carnations,’” DeFreitas exclaims. Yet, “By putting all the carnations together, you don't realize it's carnations — you see a textured shape.” Keying on the event's “Venice in Vegas” theme, the flower arrangements were also embellished with iconic Venetian masks, sparkling crystals, feathers and glass beads.

The foremost goal for the event team was making a spectacular event, as it was the first fête in a series of four days of events. “You want to make sure that the first impression is going to be a good impression,” DeFreitas says, “because it is going to set the standard for the rest of the events.”