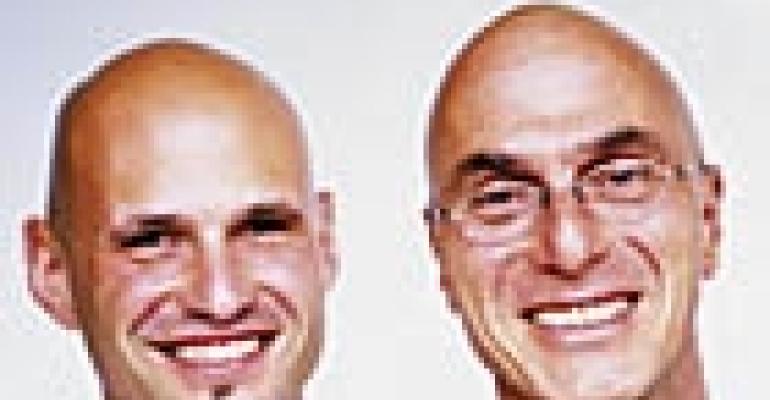 WITH HIS ENDURING love of leaves and petals, it is only fitting that David Stark should describe his career in events as “a very organic evolution.” He explains that he and partner/company namesake Avi Adler “were both painters and artists, and somehow by accident, we fell into working with flowers for parties.” Since the pair's entree into events more than a decade ago, business savvy and design ingenuity — as much as a feel for flowers — have nurtured the growth of Brooklyn, N.Y.-based design house Avi Adler.

An event the pair worked on nine years ago for the New York City Opera taught them that decor didn't necessarily mean fabulous floral arrangements. Instead, the team decked out the gala opening for “Macbeth” — a “very grim, very gray production,” according to Stark — with towers of industrial scaffolding fitted with shelves topped by thousands of candles.

At about the same time the partners recognized the potential in unconventional decorating materials, they hit on the realization that “the crazy ideas we were coming up with had to work with an overall logistics plan for the party,” Stark explains. “The food and the kind of service, the kind of china, the kind of seating — all those things factored into the whole experience. We were planning it anyway — we realized that we might as well get paid for doing it.”

These days, Avi Adler handles everything from destination management to custom print materials for event clients that have included Harper's Bazaar, Valentino and the New York Stock Exchange. And the company continues to focus on nontraditional materials — plastic toy balls and feather boas among them — in a design approach described by Stark as “finding inventive ways to make things out of things that are unexpected.” He notes that in the past few years, Avi Adler's penchant for reinvention has attracted brands seeking a fresh public image. Organizations often approach asking, “‘How can we reposition ourselves and look groovy to the world?’” says the designer, naming Brooks Brothers and the Bermuda Department of Tourism as recent re-branding clients.

Stark and Adler plan to follow “Wild Flowers” with a second book due out in January 2006. True to their “expect the unexpected” nature, the pair will take a totally different track with the new volume, Stark says. “It's going to be a really luscious, beautiful flower book about bridal bouquets — about what is available in season, but also about stem treatments, things that could be inspired by fashion and by the world around us. It will focus on the bridal bouquet as a jewel.”

“Materials don't limit us. We don't just say we're florists and we work with peonies and beautiful, expensive flowers. We think more, ‘What is the effect we want to have? What is the mood we want to create? What exists out in the world, whether it be from the hardware store or from the flower market or from the junkyard, that can be transformed into something cool?’”

“About seven years ago, we started to be hired by PR agencies and other clients who realized that they could get press for their clients through the decor at their events. They invited us in because they hoped that we would come up with some crazy idea that would be newsworthy in its own right, and that their client would be mentioned in relation to that.”

“We were never trained with flowers, so we never had to unlearn all these things you learn by working for other people. It was all about experimenting, playing, making mistakes and learning from them along the way. That's how we developed our ideas about how to do things.”