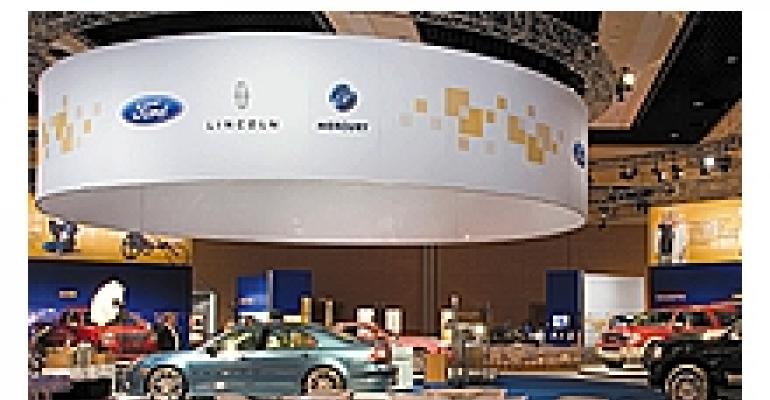 Imagination Creates a Big Stage for a Big Event

WHEN you make a big announcement, you need a big stage. Imagination USA provided just such a setting for client Ford Motor Co. at Ford's new-model introduction meeting, held July 31 through Aug. 11 in Las Vegas. This year's event marked the first time that Ford's Lincoln and Mercury brand dealers held a joint meeting. The event served as a forum for the nationwide network of independent franchise dealers to talk with Ford executives on issues challenging the retail automotive business.

At the event's core was a series of business meetings giving dealers the opportunity to learn firsthand about Ford's products and plans for the future. To stage the meetings, Imagination designed and developed a complete transformation of the Mandalay Bay Arena.

Using a raised stage and seating area, Imagination boosted the environment space from its usual 30,000 square feet to 54,000 square feet. The transformation included a massive projection surface that spanned 110 feet at its widest point. An array of 23 projectors was constantly directed on the screen displaying a variety of landscape and scenic images to transport the audience across the American tableau, positioning the Lincoln and Mercury lines as distinctly American brands.

The stage, which was shaped like a cresting wave, was equipped to offer a range of theatrical capabilities, including a pair of sliding barn doors to house and hide vehicles and a 14-by-75-foot pop-up projection screen capable of accommodating multiple sources and aspect ratios.

But the big installation brought big hurdles. Imagination projection designer Chris Slingsby explains, “To create a ‘single’ projected image onto a three-dimensional surface that was 60 feet from front to back, 110 feet wide and 100 feet high when unwrapped was a challenge,” but one that the Imagination team “took on with relish.”

The event kicked off the first night with a hard look at the issues facing the automotive business and responded with Ford's plans and tactics. A high point was the product parade, in which vehicles destined for dealer showrooms took the stage backed by the added punch of multimedia and film support.

The enormous images took careful crafting. “Bespoke {custom} software was created to cut, distort and blend together each of the 15 pieces of picture into a seamless whole, any piece of which could be adjusted for alignment as necessary in real time,” Slingsby explains. “A further eight 16,000-lumen projectors were also used to project the varying formats of PowerPoint, film, TV commercial and camera shots of presenters and vehicles live onstage.”

The event environment did double-duty, serving not only as the venue for business meetings but also as the site for a sit-down dinner for 3,000 guests.

Ford has been Imagination's client for nearly 30 years, but the work is never routine. “This was an exceptionally challenging job for Imagination,” Slingsby says. “But we did it, and the results were breathtaking.”