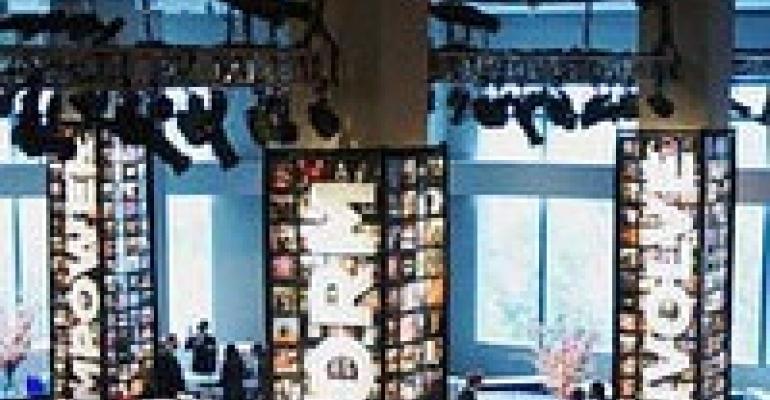 “From the very beginning of my career,” notes high-profile event designer Matthew David Hopkins, “I have always looked to create events that not only look great but also meet my client's goals.” That philosophy shines in the work that his company — New York-based 360 Design Events — created for an event that cable-news giant CNN hosted for advertisers in April.

For the CNN + HLN Newsmakers event, held at Jazz at Lincoln Center, the 360 team “immediately went to the CNN mission to ‘inform, involve and empower,’” Hopkins says. To immerse guests — a collection of media buyers and ad agency executives — in the CNN brand, the team turned to CNN's immense photo library showcasing its on-air talent.

Using nothing more than “standard rentals and some fantastic curtains we created out of their own images,” Hopkins says, the event team developed a series of columns covered in photos of the network's anchors, reporters and hosts. Guests could easily move and mingle while enjoying breakfast and taking in views of Central Park and the Manhattan skyline. “The result was an engaging and dynamic atmosphere in which CNN joined their guests in the conversation about the next steps in journalism with CNN + HLN,” Hopkins says.

For the Heart of Green Awards last year, the 360 team underscored the eco-conscious theme by creating decor that not only served the event but lives on well past the party.

Working on behalf of client EBay, the 360 team used hollow-core doors to create kiosks showcasing EBay merchandise — the ultimate in recycling. Through thoughtful design, the event team maintained the integrity of the doors, donating them post-event to be used in community building projects. “The result was a colorful, environmentally friendly solution that matched our client's mission perfectly,” Hopkins says.

LOUISIANA ON MY MIND

The more guests knew about the culture and customs of New Orleans, the more they appreciated the decor created by New Orleans-based Urban Earth Studios for a March wedding there.

The bridal couple had selected a cocoa brown for the attendants' dresses, “very similar to the underside of a magnolia leaf,” the state flower, notes Urban Earth director of sales James Clawson. “We started there.” That color blossomed into a warm, earthy palette of oranges, browns, greens, burgundy and copper, brought to life with floral including lady slipper orchids, Black Forest callas and a signature magnolia garland laced between the columns of the city's landmark Peristyle pavilion, site of the ceremony.

Inside the 8,000-square-foot reception tent, red twig dogwood “trees” (see photo above) made for dramatic centerpieces. Hanging votives and teardrops — each with a single orange tulip bloom — created intimacy, as did the floor plan based on circles of tables. “We worked to put a visual block from the front to the back of the tent,” Clawson notes. “I didn't want any clear, clean views from one end of the tent to the other, as I felt that would be cold and intimidating.”

Indeed, the 300-plus guests could have felt swallowed up in the big tent, but the extra space was a must for a proper New Orleans wedding. “New Orleans receptions very often include a Second Line [a parade of musicians and high-stepping followers], so clients and guests needed the space to parade around the tent, almost like a racetrack,” Clawson notes. “I know that sounds funny to folks outside of Louisiana, but it's an important part of the culture here.”

For the Dutch Masters Ball last year, MVKA Productions created an event that was a work of art in honor of works of art. To commemorate the display of priceless 17th century Dutch masterpieces at the Vancouver [British Columbia] Art Gallery on loan from Amsterdam's Rijksmuseum, Vancouver-based MVKA used Dutch motifs both familiar and subtle.

Held in a 6,500-square-foot tent, the VIP gala featured traditional Dutch elements including a wealth of yellow and deep orange tulips — the national flower of the Netherlands — as centerpieces, floral sculptures and hanging floral chandeliers. The evening also included a performance by the New Dutch Choir, speeches by the Dutch royal family, and cuisine prepared by visiting chef Robert Kranenborg, who was flown in from Amsterdam for the occasion.

But art lovers also recognized motifs from Johannes Vermeer's “The Love Letter“ — the highlight of the exhibition — in the event decor. The black-and-white checkered dance floor recalled the floor in the painting. The rich blue velvet drape that created a full room surround represented the blue of the maid's dress, while the mistress' gold gown was echoed in gold event programs and napkins. The painting's gold frame was interpreted in two 9-by-12-foot video screens; gold frames in the reception areas showcased floral sculptures.