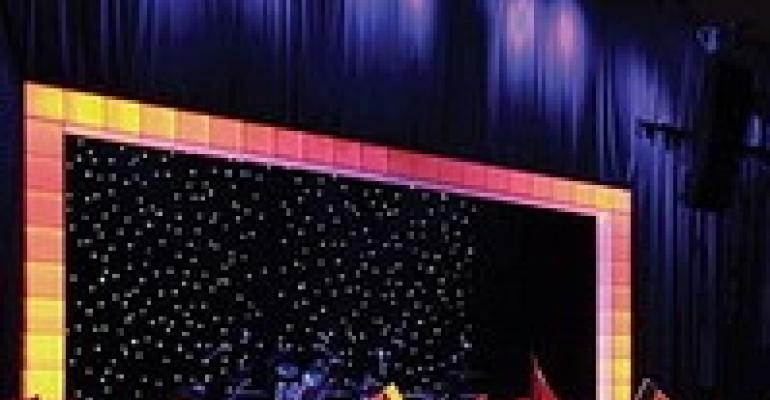 The city of Syracuse, N.Y., has traditionally been known for its historic university campus, not its high-profile Hollywood-style film premieres. Until now.

In September, Los Angeles-based event firm Precision Event Group, working for Syracuse University in conjunction with Universal Pictures, transformed an aging local ice arena into the spectacular setting for a 3,000-guest bash. The party celebrated the local premiere of the film “The Express,” set in Syracuse. To ensure a hit, the event team walked the fine line between respecting local talent and injecting big-city experience.

It wasn't so much that the Oncenter War Memorial arena was a sports venue — appropriate for celebrating “The Express,” a 1950s college football story — but that it was the only venue in town offering 30,000 square feet of event space, vital for accommodating the big crowd expected.

Although the venue's space was a major plus, the venue team had no experience with a major premiere party, says Precision's Jason Wanderer. “The venue had never hosted a full conversion or an event that required masking 360 degrees,” he notes. “Rigging and load plans did not exist. We brought in our own technical staff composed of architects, engineers and riggers to assess the building and determine possibilities.”

Further, the arena's in-house caterer had no background with Hollywood-caliber events. “They are industrial caterers with very set menus,” Wanderer explains. “They don't really deviate from that. And while they were very helpful and willing, they just didn't have recipes, and they didn't have a vision of what we like to call creative food presentation.”

Nonetheless, “We were cognizant of the fact that we were going into someone else's house, and when you're in someone else's house, you don't want to jump on their couch,” Wanderer says. Precision presented the process as a team effort, bringing in New York's The Catering Co. as consultants on the event's menus. The result was a combination of upscale dishes such as grilled beef tenderloin and oysters with champagne mignonette alongside thematic bites including mini gourmet hot dogs and logoed cupcakes. In order to ensure both exceptional food quality and effective food presentation, Precision imported line chefs and servers from other cities, along with 12 trucks of rentals from Classic Party Rentals, New York, and a variety of its own serving pieces.

As for a football-theme event environment, Precision used big screens, bold splashes of color and a bunch of borrowed turf to evoke the look and spirit of the film — the story of Syracuse University football star Ernie Davis, the first African-American to win college football's esteemed Heisman Trophy.

Wanderer notes that laying turf from the university's practice football field on the arena floor was not only an excellent way to create the feel of a real stadium but also an effective cost-saving measure. Orange lighting and blue linen — a nod to the football team's colors — and full perimeter draping gave the vast space thematic consistency, while props such as period football helmets and a bar based on an original concession stand from Syracuse's stadium added authenticity.

But no single design element had more impact, Wanderer recounts, than the four 20-by-30-foot projection screens Precision built into the perimeter draping. “We produced a video that had no audio,” he says, “but was a combination of original footage from Ernie Davis and the team, juxtaposed with images from the film.” Screened as dynamic decor throughout the event, the combination of actual archival images blended with film footage “really created a sense of pride and tied the history together with the movie,” Wanderer adds.

While the event scored a touchdown with both clients and guests — the many Syracuse students and locals in attendance especially loved star Dennis Quaid's impromptu jamming with the event's band — the event might have fumbled without Precision's teamwork with the city of Syracuse.

While city authorities assured Precision that they were handling such issues as police presence, barricades and street closures related to the film premiere and party, “They didn't have any experience with events of this sort,” Wanderer says. When he and his team were finally invited to meet with city representatives, much later than he would have liked, “We had to guide them as to what they could expect,” Wanderer says. They looked at us like we had six heads. But, eventually, they realized we were right.” He adds, “It was a great learning experience for them, too.”