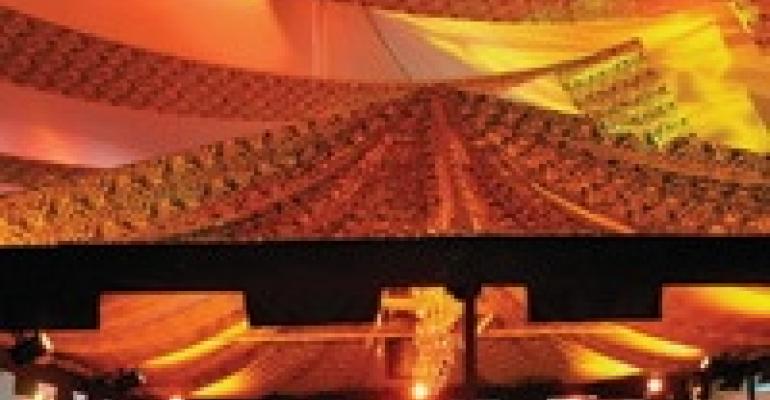 All the artistic director wanted was Paris.

At the after-party following its May win in the Pell Awards, which recognize distinguished achievement in the arts, the artistic director of Providence, R.I.-based Trinity Repertory Co. asked event designer Perfect Surroundings to incorporate Paris into the theme. To oblige, the father-son team at Perfect Surroundings — which operates out of Newport, R.I., and Miami Beach — tapped into its own love for international travel, food and decor.

“We have traveled and worked a lot in Asia and the Caribbean,” says family head Richard Carbotti, Perfect Surroundings' founder, “which helped us identify areas that would be great to showcase in the event.”

Planning a worldly event in a parking lot — the event venue — had both advantages and disadvantages, says Richard's son Evan, who handles Perfect Surroundings' event design and concept development. “We had a great location in the heart of a major city,” he explains, “but we had to find ways to drown out the light from the outside, using fabrics and tent siding, without losing the view of the cityscape.”

The open, bar-style seating areas allowed guests to sip cocktails and munch on classic national dishes — such as French tartines — without ever leaving the comfort of a chaise. “If a guest was sitting on a sofa,” Evan Carbotti explains, “a butler would walk up to him and take his order. As designers, our inspiration came from an assortment of comfortable places we have been.”

Lighting helped distinguish each event space. “The lighting created blocks of color and helped divide the areas,” Evan Carbotti says. As guests entered the Japanese-themed event space, they were welcomed by a rich glow of red and jewel tones. Lit bars featuring Asian-inspired murals on Lucite panels provided focal points, beckoning guests to order a sake or Sapporo beer. Event-goers sampled ethnic cuisine such as edamame, yakisoba — soba noodles with julienne carrots, water chestnuts and snap peas in a ginger sesame sauce — and a selection of sushi, all while lounging on plush daybeds. “The Japanese look came from a lot of places — sleek, contemporary styles of places like the Setai hotel in Miami Beach and Japanese art books,” Evan Carbotti says. Guests enjoyed exploring the different cultures. He adds: “I could hear them saying, ‘I'll meet you in Japan or France’ as they moved around the event.”

The Perfect Surroundings team attributes the event's open style, along with the variety of food, drink and comfortable seating options offered, to its success. “Guests want to feel like they are in their favorite lounge when they attend events — they don't want to be crammed into a tent or ballroom,” Evan Carbotti says. “This event allowed people to use the space as they would if they went out for a night in the city.”