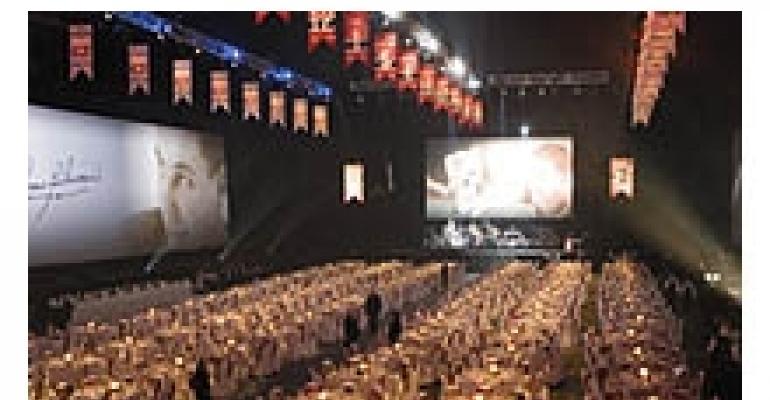 Feeling fed up with flowers? Gina Cobetto, owner and designer for the Montreal-based Candelum Group, says foregoing floral in favor of creating a mood with light is a waxing trend. “I specialize in natural lighting; I don't need flowers because I'm selling ambiance,” she explains. Montreal-based decor company Denis Gamelin Limitee asked for Cobetto's help with a March gala in honor of hockey Hall of Famer Jean Beliveau. The event team crafted an elegant atmosphere for 1,000 attendees in Montreal's Bell Centre, with flickering flames from custom-made candles illuminating the chic tribute.

Cobetto set the stage for the hockey star's soiree — in this case, a cavernous hockey arena in need of warmth. “I had to create an impact,” Cobetto says. “The space is usually an ice rink.”

Her lighting plan needed a stunning center-piece for each of the 96 round tables. The decor item had to “have height but could not be too high — something that would not obstruct guest views,” she explains.

Cobetto's solution involved a candle el-egant in its simplicity. A 9-inch-high cylindrical candle with a diagonally cut top — instead of the traditional level top — did the trick, raised about 2 inches with floral elements.

While the night's spectacles were a major draw for attendees, all the action proved problematic for Cobetto. “There was a lot going on; they were playing with the space a lot,” she says.

Since the rectangular head table was only 30 inches wide, Cobetto and the florist set up an unobtrusive 16-candle aisle on the table's edge. Eight brown candles — “I came up with a touch of brown that was more masculine; it was a masculine crowd,” Cobetto adds — provided light. For the other eight spherical candles, she thought outside the box. “Instead of using a vase with a different texture, we used the same texture down the aisle and filled ivory candles with flowers,” she says.

Like all designers using candles, Corbetto knew that the local fire department could snuff out her plans. “The fire department in Montreal is very, very strict,” she says. Yet Cobetto has found a way to “work hand in hand with the fire department,” she says: All of Candelum's products are preapproved by fire officials. As a result, Cobetto doesn't have to seek authorization before every event. But “When I do a special setup, like putting candles on the floor, I have to ask permission,” she explains.