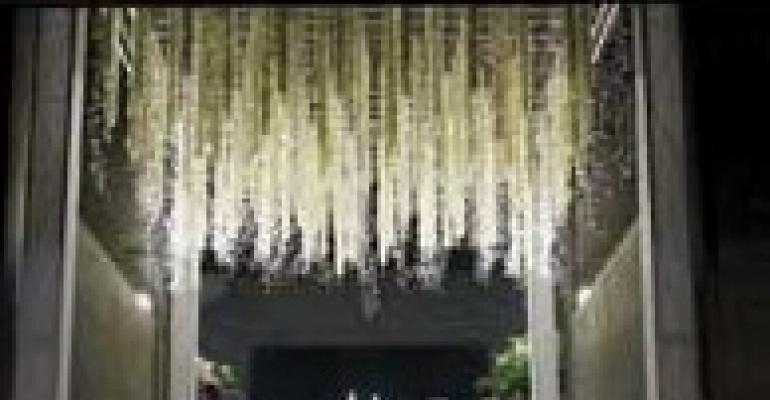 The Precious Moment Takes Guests on a Walk Through the Seasons

Entitled “A Walk Through the Seasons,” an August gala hosted by Chinese real estate development firm Vanke could just as easily have been called “A Study in Contrasts.” Contrast, after all, was the foundation of a design scheme created to echo the company's four newest residential developments, which situate high-concept architecture in picturesque natural settings. Using what she calls a “mix and match” approach, event designer Yi-Ching Kao, head of the Precious Moment, with offices in Taipei, Taiwan, and Beijing, brought in multiple sensory elements — not to mention an actual 300-year-old Chinese opera house — to create a Gala-nominated event.

Held in the clubhouse of one of Vanke's four new residential communities, all of which are located in southern China's economically vibrant city of Shenzhen, the 150-guest event took advantage of the venue's multilevel construction.

Kao made the most of the ascending levels to evoke distinct seasons, along with the Vanke developments' “Embracing Nature, Discovering Your True Self” brand message. At the same time, the designer not only capitalized on existing natural elements but also created facsimiles of nature using linen components, floral, lighting and liquid.

An outdoor entry area first engaged guests with an interplay of darkness, candlelight reflected in a pool surface, shadows and insect sounds. As guests ascended to the second-level cocktail area, they found themselves fully enveloped in elements evocative of springtime, including a color scheme of white, dark purple and green, recordings of songbirds and a dancer, lit from behind, performing inside a See page 19 cloth cube. This shadow dance “expressed the concept of light and shadow in nature,” Kao explains.

Transitioning from spring to summer, guests made their way into a dazzling space hung with more than 700 strings of dendrobium orchids — floral alone, Kao says, accounted for more than 50 percent of the event's total budget. Each string was accented with crystal beads, “giving the appearance of raindrops falling on flowers,” she adds, a nod to southern China's famously rainy summers. White ginger lilies and incense added to the sensation of summer, as did an all-green color scheme.

The event's main dining area, meanwhile, featured a palette of yellow, orange and red, symbolizing the fall harvest season. Kao notes, “The company and their most important guests could gather together to celebrate another year of harvest and look forward to the next year's harvest.”

Within the seasonal theme, the juxtaposition of classic and modern was perhaps the event's most compelling contrast.

The counterbalance of past and present was most notable in the presence of a centuries-old unsheltered opera house, acquired by Vanke from a private owner, transported from thousands of miles away and reconstructed on the venue's fourth level.

“Ancient Chinese buildings are large puzzles of carved wood with no nails,” Kao explains. “The opera house was transferred by separating all of the wood pieces and shipping them to the residential community. Then, each piece was joined exactly as it was in the original site.” Unfortunately for Kao, who was tasked with designing the evening's banquet inside the structure, “The opera house was not completed four days before the event, so I was not able to see the entire finished structure during the two pre-event site observations.”

Despite the challenge, Kao designed a dinner that embodied another contrast: East and West. “Typical Chinese meals are served at round tables,” Kao explains. For the Vanke event, however, guests enjoyed a dinner at Western-style long, rectangular banquet tables.

Further expressing the interplay of old and new, a transparent T-shaped stage, site of the evening's fashion show — part of which focused on clothes made of paper, and another part showcasing clothes decorated with flowers and plants — featured flowing water underneath. “The water was filled with goldfish and lotuses to blend modern technology with classic Oriental style,” Kao says.

As conceptually complex and design-heavy as the event may have been, it was the mundane logistical challenges, and Kao's careful planning in order to circumvent them, upon which success hinged.

With the remoteness of the event site — “It would take two and a half hours to get to the nearest city,” Kao states — and the sourcing of floral from five different countries, the designer opted to prep 20 percent more of each floral item in order to avoid any shortages on site.

The planner, also realizing that product measurements submitted from mainland China are notoriously inaccurate, altered the tablecloth design for the event's iron-frame cocktail tables from single cloths to more flexible woven-strip linen. Good thing, too, because the tables arrived several inches larger than the dimensions quoted by the manufacturer.

Logistical issues aside, “The most important thing in this event was the interaction between the decorative design and senses of sight, hearing, smell, taste and touch,” Kao says. “Use of the five senses fully embodied the Chinese cultural ideal of ‘the five discernments’ and left a profound impression on the guests.”