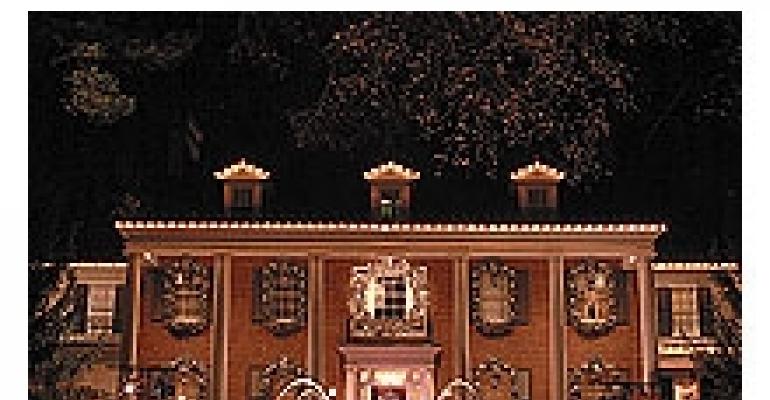 THERE'S no place like home for the holidays. Especially when the home in question is a lavish Nashville, Tenn., estate set on spectacularly landscaped grounds featuring gardens, terrace, pool house and portico. With such stylish digs as your soiree site, there's no sense working against the grain with complicated theming or a conventional Christmas palette. Instead, says Nashville-based designer Timot McGonagle, “I let the house guide me.” The resulting event he created last Christmas was a supremely stylish yet consummately cozy holiday gathering that took advantage of the residence's natural beauty and the season's spirit of warmth and wonder.

Since this was his second year designing the annual party, McGonagle knew he wanted to change things from the previous Christmas' cool, “crystalline” look. At the same time, he was determined to maintain the comfortable, “open house” feel that his client desired.

“We decided to make the tent the thing that changes,” he says, referring to the clear-top structure — a feature of both the 2003 and 2004 parties — that covered the home's stone terrace and drew guests out of the house despite chilly winter weather.

For this event's tent, McGonagle opted to go with a “velvet and rubies” concept, the foundation of which was several hundred yards of embossed rayon/acetate velvet — a fabric that McGonagle loves for its light-reflecting qualities and “buttery drape.”

But another of the material's qualities — its flammability — wasn't so lovable. Neither was the process, administered by an outside expert brought in specifically for the job, of treating the material with flame-retardant. “It required fabric submersion that kept removing the embossed patterns,” the designer recounts. “We were mystified.” Despite naysaying from the fabric mill, McGonagle insisted on finding a solution, which finally materialized when the mill manager suggested increasing the heat of the embossing rollers for a harder burn into the fabric.

All this for a safety measure that McGonagle acknowledges was not required — the event site being a private home — but which he provided as added protection for guests. It didn't hurt, he adds, that flame-proofing the velvet also renders it usable for future fêtes he might produce in more code-conscious venues.

Besides a perimeter draping of velvet, the event tent got an 18-foot faux-stone bar and faux-flame yuletide urns hung from the ceiling. At the structure's center, a 15-foot tree was flocked and airbrushed to match the velvet's red hue, then decorated with more than 2,000 ornaments, 500 yards of matching ribbon and more than 2,000 feet of beaded garlands. When complete, the tree weighed 1,400 pounds.

Inside the house, each discrete space “felt like its own cocoon,” the designer says, noting that the aesthetic integrity of each room was retained. Examples include the home's billiard room, whose 19th century stained glass windows were complemented by 1,400 iridescent jewel-tone glass ornaments braided into the branches of a 13-foot Christmas tree. In the formal dining room, the existing pink, blue and green color scheme was enhanced by a spread of spun-sugar-encrusted desserts laid out on custom translucent table linen.

Guests could enjoy the party's opulent atmosphere while never feeling they were at a formal event, McGonagle says. “We didn't put a bunch of chairs out,” he explains, noting that his crew instead chose to use the house's existing furnishings for the majority of seating. Food stations set up throughout the house ensured movement and gave attendees an opportunity to take in the home's recent renovations.

Adding glow to the flow were the 1,000 votive candles McGonagle placed throughout the space, bringing up yet another of the designer's safety standbys: “I always keep a votive log — a list of where all candles are, room by room, along with when we light them and when we blow them out,” he says. “We make sure that none are left behind, and inside a house, we never light a candle that isn't inside glass.”

One of the event's most important elements — and a key feature of most successful seasonal fêtes — was its appeal to all guests, whatever their faith might be. “{My client} wanted this to be a holiday event, not a Christmas event,” McGonagle states. “She has a lot of friends from different cultures, so it had to feel festive and holiday, but not bludgeon people with a point of view.”

Using existing room decor as a guide “made it gentle for everyone,” he says. Meanwhile, weaving decorations into the many trees used in the event, rather than simply dangling baubles from limbs, created a “cornucopia effect” inspired by the notion not just of the beloved Christmas tree, but also the Islamic and Jewish “tree of life” traditions, he notes. As a result, the party was “organic, symbolic — beautiful.”