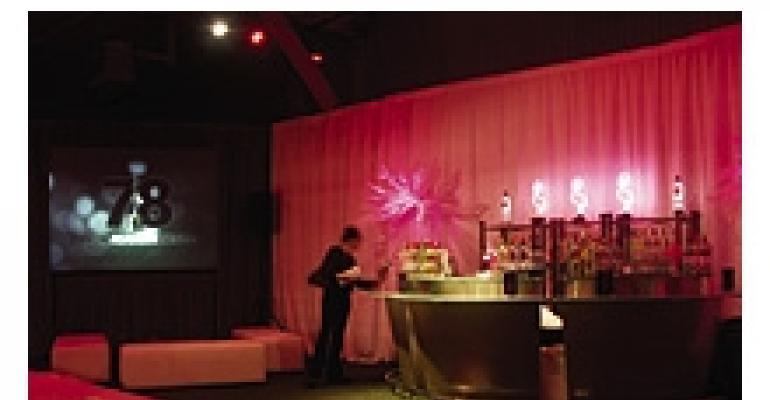 WITH all of the glamour and excitement of the Academy Awards, plus the advantage of benefiting HIV and AIDS service organizations, San Francisco's Academy of Friends' annual Academy Awards Night is an excellent place to watch the Oscar ceremony on TV. San Francisco-based DaVinci Fusion, which served as lighting designer for the March 5 event, gave the gala star treatment.

The Awards Night, organized by San Francisco-based Lynn Winslow & Co., is the pinnacle of the Academy of Friends' fund-raising efforts. The event, which celebrated its 26th anniversary this year, started as a small private Oscar party, but has grown to become a gala evening that has just as much glitz as the Oscars; food, dancing and entertainment follow the awards show.

To dazzle the 2,500 guests, DaVinci Fusion worked on the event for about four months, preparing the lighting concepts inside the Concourse Exhibition Center, the evening's venue.

The night began with the televised Oscar ceremony, viewed at eight individual stations where scenic designers offered different interpretations of the evening's theme, “Rubies and Rhinestones.”

Environments honoring the real and faux luxury found in sassy Miami Beach, chic Manhattan and the swinging '60s were created to showcase the ceremony. DaVinci Fusion had to take into account that each viewing booth was different depending on its location within the center. “Some were mezzanines, some were on the main floor. Some had walls, others didn't,” explains Solomon Rosenzweig, DaVinci president. “As guests moved from space to space, they got very different impressions. Each designer's work had to be honored and its integrity maintained while effectively contributing to the gala's theme.”

Neon provided a consistent element from space to space; the statement-making light brings a special energy to party environments, Rosenzweig says. For this event, he used it to create stars, columns, the ubiquitous martini glass and a large “Rubies and Rhinestones” entry piece.

A “diner” was the concept for DaVinci Fusion's own viewing space, which was inspired by the movie “American Graffiti.” An LED screen in the middle of the diner's counter broadcast the Oscars, surrounded by windows with painted clouds and jars of 1960s candy. Rosenzweig enjoyed watching the guests watch the ceremony, showing their support, or lack thereof, to the celebrities on TV with whoops and hollers.

DaVinci Fusion donated $20,000 in lighting equipment. Rosenzweig described the night as a winner itself because, “This was one of those events where we know our contribution made sense on so many levels,” he explains. “We had the opportunity to show our talents, our designs, our skills, give back to the community and have the opportunity to feel good because our contribution was so important.”