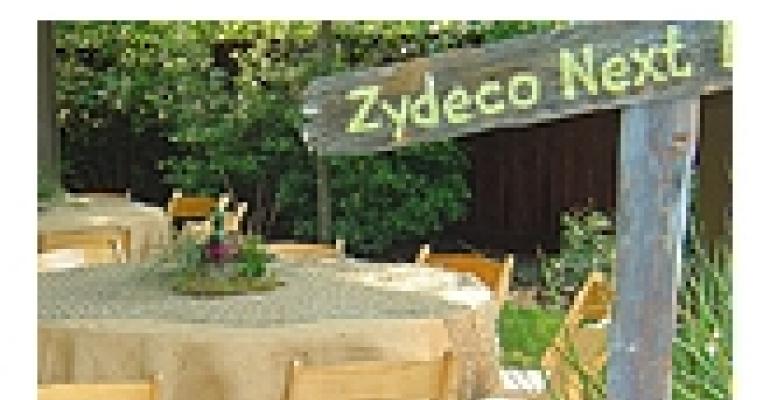 Jill Lively, director of special events for Houston-based Cosmo Cool Concepts, says right now, “Everyone's about Texas Hold'em. It's Texas Hold'em day and night.” Luckily, this suits Lively, who tries to incorporate a little bit of Texas into events as much as possible. In fact, she says, “I hate doing anything that promotes a destination other than ours.” Instead she'll recommend the theme with a Texas twist: a Texas Gulf Coast theme for a beach idea, for example. Her philosophy: “Texas is such as huge stage with so many different cultures and landscapes — why would we want to promote somewhere else?”

And clients want more than just decor these days. Instead, “They want action, fun, conversation, entertainment,” Lively says. To achieve this, she brings in “an absolutely hilarious cowboy storyteller to spin tales about how the West was won.” As for decorating favorites, she reveals, “Right now I'm all about white canvas palm trees.” She also favors cabanas with white flowing fabric as well as lighted, hand-painted paper lanterns.

Event Impressions, based in Rotorua, New Zealand, has the advantage of dramatic natural surroundings to enhance its event themes. One unique outdoor event the company produced in March was a geyser-side dinner. Guests strolled past thermal hot pools, then ate dinner overlooking a geyser shooting up to 30 meters (nearly 100 feet) high. Indigenous accents helped underscore the theme with table toppers such as abalone paua shells, pumice, moss and flax. Guests ended the evening with a ride in an electric people mover simulating a whaka, a traditional New Zealand canoe.

Another event of note is Event Impressions' “Alien Invasion” party, held in January in a 105-year-old redwood forest. A “top secret area” was taped off, and guests were told to “remain inside the caution tape at all times and be on alert for aliens,” according to Jacqui Smith, managing director. Dinner tables had a clear view of the wreckage of the aliens' crash-landed space ship, still “smoking” courtesy of dry ice. Other details include helicopter noises as guests arrived, “aliens” dashing through the foliage in the distance, men in space suits scanning each person through a “security arch,” and tables set with silver tablecloths. Green, glowing cocktails were spiked with Bailey's Irish Cream, which curdled and formed floating “alien brains.”

Smith highlights lighting as key to successful theme events. “In general, the wrong lighting can really do damage to fantastic food presentation — from not enough lighting to the wrong color lighting,” she says. “So important, so easily fixed, but so often forgotten.”

WHAT HAPPENS IN VEGAS

While Event Impressions uses natural surroundings to set a mood, The Venetian Resort Hotel Casino in Las Vegas looks to the city's man-made spectacle. When the show “Phantom — The Las Vegas Spectacular” opened in June, the Venetian threw a party of corresponding vision. The “Phantom” grand opening gala included a room draped in red velvet with fog crawling along the entryway. Proving that necessity is the mother of invention, inspiration for the visual focal point of the party hit only when the event team couldn't bring in “a real chandelier of the quality and size necessary to carry the room,” according to Gary McCreary, executive director of catering and convention services. Instead, a massive chandelier composed of 20,000 red carnations added a unique and opulent touch.

Another Venetian party in keeping with a city that likes to create worlds within worlds was a December 2003 bar mitzvah themed on the film “The Lord of the Rings.” Guests entered through a 14-foot round door commanded to open by emcee “Gandalf.” For decor, real sod covered the floor of the Hobbit's Shire area, and table centerpieces resembling trees decorated with vines and moss harkened to the Elven kingdom of Rivendell. One of the event's highlights was a chocolate fondue vessel representing Gollum's swamp, which “consisted of a chocolate and marzipan backdrop with a liquid chocolate swamp,” McCreary explains. “Our team devised a system of tubes in the bottom of the swamp that bubbled air up through the chocolate to give the scene life.” Other foods that echoed the theme included an Elven purse of smoked chicken tied with a leek and a twig, and a caviar presentation set in a mystic icescape of Helm's Deep.

McCreary says while events have gone high-tech and interactive lately, his philosophy remains, “Pay no attention to the man behind the curtain.”

For Los Angeles-based Along Came Mary Productions, movies often dictate event themes. In Fact, owner Mary Micucci has been called “the queen of theme” due to the lengths she'll go to when creating a party environment to reflect a movie. For the December 2005 premiere party for “Memoirs of a Geisha,” Micucci recalls, “We had to buy thousands and thousands of silk cherry blossoms, and I do mean thousands.” The party featured areas including a temple vignette, a bridge vignette and a reconstructed theater as an homage to the scene where the heroine performs her dance. Erick Weiss, vice president of catering, says, “We had dancers in full geisha costume — wigs, make-up, the whole thing, striking poses on the stage all night.”

Micucci's company also put on the June “Superman Returns” premiere party, where the event team constructed “The Fortress of Solitude” — Superman's remote hideaway for reflection — “out of truss that was covered in fabric and interiorly lit; it glowed and changed color in icy blue tones,” according to Weiss. Another area represented Metropolis, the city Superman's alter ego lives in. To help set this scene, Along Came Mary created a large-scale backlit print of the façade of the lobby to Metropolis' news-paper, The Daily Planet.

For successful parties, Micucci stresses logistics. Her team reviews a floor plan five or six times to ensure proper flow because, according to Micucci, “No one should ever have to wait for drinks or food.”

Sean DeFreitas, owner of Dania, Fla.-based Designs By Sean, has noticed a movement away from literal theme parties. Instead, clients tell him, “‘I don't want a theme, but I want a feeling,’” he explains. He describes the difference as looking at “a painting that's abstract versus something that's realistic.” He achieved this with his “Everglades Elegance” party last year, an intimate affair involving all the senses. The event contained decor elements such as die-cut Monarch butterfly menus, lush greenery and low-lying fog lit in emerald, turquoise and amethyst rose. Other sense enhancers included cricket and frog sounds played in the background, the scent of eucalyptus and food items flavored with Florida's citrus.

Although DeFreitas is Florida-based, 50 percent of his events take him out of state, and sometimes out of the country. One June event took place in Canada's Yukon Territory near Alaska, where DeFreitas highlighted the historical significance of the area to build a theme. He describes the train station venue, Bennett Station, as beside a “huge lake in the middle of nowhere,” requiring everything to be brought in by train. Because of these restrictions, Designs By Sean couldn't bring in flooring, instead using sawdust and mulch beneath guests' feet. Additional decor touches included old bottles and antiques from a local antique shop, rustic tables and chairs screen-printed with art by native tribal artisans, and indigenous wildflowers, driftwood and rocks.

The site was so rustic that to gather the rocks, “We had to take someone with us who had a rifle to prevent bear attacks,” DeFreitas says. Yet he was glad to put in the extra effort because, he says, he could “bring out the best of what the whole event was about, which was the place.”