View Our Webinars!
Featured
What Pandemic Shifts are Here to Stay in the Wedding Industry?
Dec 06, 2021
Taking on the 2022 Trends
Jan 28, 2022
As Seen in Cincinnati
May 05, 2022
Maximize Your Conference Experience with a 3-Step Measurement Plan
May 03, 2022
Special Events
brought to you by 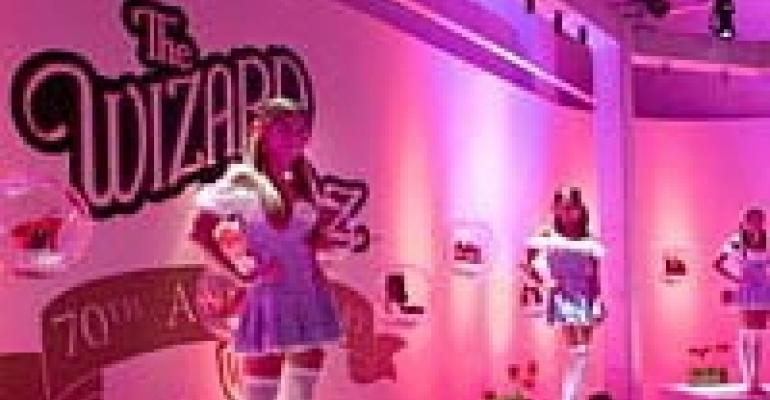 There's no place like a stylish party. Triton Productions in Miami Beach, Fla., knows that.

For the 70th anniversary of the release of the movie “The Wizard of Oz,” Warner Bros decided to toast the film classic with a series of very modern parties. Triton helmed the Miami and Las Vegas events in December and June, conjuring up Oz for some 350 guests per city. The team looked to the movie for design cues but added sexy spins, from decor zeroing in on a collection of designer ruby slippers to a gaggle of Dorothys in super-short blue gingham dresses to bring the theme, er, home.

To get the show on the (yellow brick) road, Triton decided to make the most of one of the most famous elements in the story — those ruby slippers. Warner Bros developed the series of events to pair with the Ruby Slipper Collection, an event campaign already making the rounds to such fashionable locales as Milan and Paris. The collection features modern interpretations of central character Dorothy's ruby slippers from the likes of designers Jimmy Choo, Manolo Blahnik and 17 others. An earlier event featured the shoes scattered throughout the venue, but the Triton team decided to give the shoes a more cohesive, starring role in subsequent events. “It made sense to make the red shoes the focal point since that is one of the most recognized icons of the movies,” says Javier Velarde, Triton's president and executive producer.

But before the shoes could be displayed, Velarde had to choose a spot for displaying them. Wanting to keep the tried-and-true theme fresh, he decided that stylish modern venues with high ceilings and clean wall space would best serve the event. In fact, a white studio setting proved ideal, which the Triton team found in Miami's Planet Hollywood & Casino. The team used Planet Hollywood again in Vegas but had to bring in shiny black vinyl flooring to cover the busy carpet, turning it into a branding opportunity with Warner Bros' logo featured prominently on the floor.

Decor touches ranged from Oz-centric to super-current. To create a clean, modern look, the lighting designer used purple as the primary color to complement and provide contrast to the red shoes. Multiple Dorothys, in white thigh-highs and pigtails, stood on 2-foot risers flanking the shoe display. Red poppies — a nod to the fields surrounding the Emerald City — served as floral, with the team nixing the red carpet in favor of a yellow brick road leading the way to the event.

Despite the many decor nods to all things Oz, “The shoes were the stars of the event, so we needed to really make them stand out,” Velarde says. To do so, the team decided to treat the shoes as an art installation — lining them up symmetrically and just a bit above eye level — “but not too high; otherwise, people would be looking at the bottom of the shoes,” Velarde notes.

To accomplish this, the team looked to another Oz icon: the Good Witch's transportation vehicle of choice — the bubble. Glass spheres made perfect sense for showcasing the ruby slippers, so the team had a designer custom-build acrylic glass bubbles, which were suspended from trusses with monofilament lines to give the illusion of floating. Each bubble contained Swarovski crystals and mini LED lights to give the pairs of uberchic red shoes extra sparkle.

But the stylish showcase did create one challenge. Guests were so entranced by the suspended bubbles of shoes that they felt compelled to spin them. “When they did,” Velarde notes, “we used a code in our walkies to our art installer: ‘Shoe down!’”