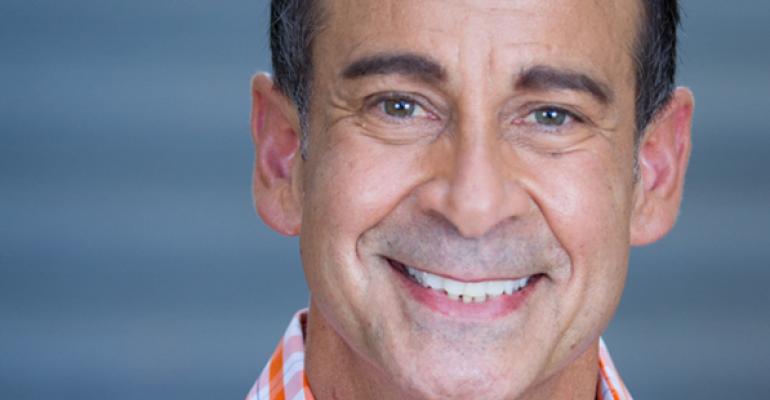 It's being called, if not "an utter phenomenon," then for sure, "the most successful mobile app of all time."

Granted, “of all time" spans only about the last eight years, because, well … apps didn't exist before then.

Nonetheless, the fact is that after launches in Australia and New Zealand, and a mere two weeks after its U.S. launch, published reports of Pokémon GO downloads suggest upwards of 21-million users. That's more downloads than any app before it during the same time period.

Even more interesting, according to Moneynation.com head writer Tom Gerencer, the app is maintaining a Daily Active User rate in the U.S. of more than 60 percent, putting it neck and neck with the well-established social network Twitter and in front of mega apps Instagram and Snapchat.

And its subscription base is not hugely composed of kids. Not even close. In fact, according to Vox.com graphic reporter Alvin Chang, 40 percent of adult Pokémon GO players are over the age of 25.

Among them is my 35-year-old partner Dangilo Brian Bonilla, who recently “took over” the Poké Gym in the casino of the MGM Resort and Casino in Las Vegas. Just moments before, we both spotted an elderly man helping a young woman catch Pokémon by the hotel pool.

But if you’re a natural cynic like me, you’re likely wondering what any of this has to do with the wonderful world of live events. After all, on the surface, Pokémon GO may be just another (obsession-driven, purse-depleting, patience-testing) passing tech trend.

On the other hand, it could change everything.

Pokémon GO goes where virtually no “mon” has gone before. It facilitates virtual play against a real-life, real-time landscape featuring milestone-delineated PokéStops where players can obtain free items to help advance their play or cast a 30-minute “Lure” to attract more players and Pokémon, and Poké Gyms where players recruit their captured Pokémon into battle for Gym control and ultimate “world domination.”

For one, no Pokémon are killed in pursuit of power, and players can obtain potions to restore and revive their little Pokémon's post-battle mettle.

And secondly, Pokémon seem to be aficionados of nature and beauty, because PokéStops have initially been placed in community parks, around fountains, near public works of art, outside museums, and in front of timeless architectural masterpieces. In our San Diego community of North Park, our artfully painted utility boxes are PokéStops.

And third, one cannot advance in the game without getting out of the house, and one cannot “win” without interacting with other players in the real, physical world. This may help to explain why people are walking across freeways, into lightning storms, and through fountains to catch Pokémon, and why self-respecting Pokémon “Trainers” are on constant lookout for Stops and Gyms. 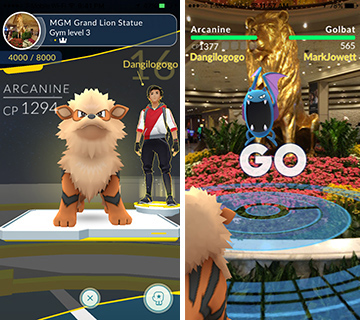 No other game or app has been able to motivate physical activity and drive traffic like Pokémon GO. Should the app’s owner, Nintendo, decide to capitalize fully on these attributes, Gerencer estimates it could earn potentially $17 billion in annual advertising revenue for the next 10 years. That’s just advertising revenue. In photo: Pokémon Trainer Dangilo Brian Bonilla takes control of the MGM Grand Lion Statue in the MGM Resort & Casino in Las Vegas. The photo on the left shows his avatar; on the right, you see how the app overlays reality.

So, in addition to current manifestations of this what’s-old-is-new-again Pokémon “phenom,” including Facebook invitations to partake in organized play at specific places and times, sponsored PokéStops cropping up at remote casinos in the southern Nevada desert, and Trainers being sent to other countries to capture Pokémon (also by way of big sponsorships), isn’t it possible to envision a world in which …

Because Pokémon GO delivers on the notion that technology should actually bring people together, because it accurately defines its players’ landscapes (through Google Maps), and retains control of its placement of Stops and Gyms, integration into live events is certainly a not-too-far-in-the-future possibility. All depends on what Nintendo “intend-ohs to spend-oh.” So to speak .... :)

Nonetheless, Pokémon has literally changed the game, and regardless of whether it capitalizes on its success or quietly disappears into the sunset (again), a new level of engagement has been achieved for others to emulate and eventually capitalize on themselves.

For those of us in the world of live events, a world not immune to “imitation,” a world measured by participation and engagement, a world driven by the human need to congregate, a world enamored with anything new, PokémonGo is indeed nothing less than utterly phenomenal. In some way, shape or form, it will surely impact how we infuse virtual technology into live events.

A graduate of Syracuse University, Anthony Bollotta has a BFA with an emphasis in musical theater. As a San Diego area based producer/director, Anthony is the president of Bollotta Entertainment, a 20-year entertainment production and booking company specializing in corporate entertainment. Nationally recognized in the events community as an innovator in the field of entertainment, Anthony has won numerous awards for his work the PETCO Chairman’s Award and Hotel Motel Association’s Allied Person of the Year Award.

AV for the Event Planner: An Outsider’s Guide to the In-house Approach
Nov 17, 2015