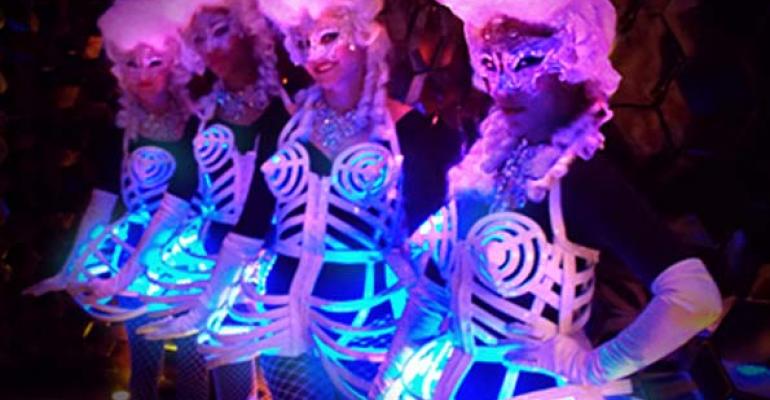 As budgets for special events gradually improve, four experts providing entertainment for events note the top trends: acts with a high-tech twist, such as the iPad Magician, Barack Obama impersonators, and anything glowing with LEDs. Acts falling out of favor: &#39;80s bands, &quot;cirque&quot; performances and &quot;old school&quot; cabaret acts.

Great entertainment can turn an event from so-so to spectacular. Here, we touch base with four entertainment experts on what acts are hits, which are flops and how the improving economy is leading to bigger, better budgets.

Flops: "It’s interesting: Predictable impersonators and soggy bands have found a way to become fresh again by integrating high-tech elements, including large LED screens and projections, into their performances, making these tired acts very marketable and adding great eye candy along the way."

Is the budget better? "Yes, anemic budgets and uninspired purses seem to be going the way of the dodo. It is now safe to be expressive, loud and celebratory--although it’s important to note that the money was always there, lingering; it just wasn’t politically correct to celebrate with corporate entertainment when pink slips were being handed out."

Hits and flops: "Many of our hottest growing acts are a twist on live entertainment: photo booths, video game parties, bubble trucks, karaoke DJs and human statues. Funny enough, as some of these higher tech forms of entertainment gain in popularity, we’ve seen declines in requests for wholesome entertainment like petting zoos, clowns and pony rides. However, that doesn’t mean that these categories aren’t still popular, just not as in demand–in fact, requests for clowns remain in our top 10. As for impersonators, Elvis continues to be king, but Barack Obama has seen the biggest growth. [The company's] 'Barack-alike' has been booked 13 times!

As for live bands, country bands and mariachi bands are already popular, and the demand keeps increasing. Despite all the '80s inspired neon fashions this season, we’re seeing a decline in requests for '80s cover bands."

Is the budget better? "On average, people are spending around 5 percent more on event entertainment than they were two years ago. Corporate events are up only 3 percent, whereas weddings are up almost 9 percent. Our data shows that bigger budgets mean more guests! We’ve seen a 30 percent increase in parties with 500 or more guests. On the wedding side, people are booking live entertainment for longer periods of time and during more parts of the wedding day--ceremony, cocktail hour and reception." 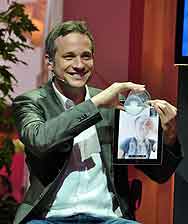 Hits: "At the moment, our hottest and most sought-after acts include our iPad magician [see photo]. We have been inundated with inquiries from all over the world for this digital magical act/entertainer, especially for exhibitions, corporate events and product launches. The iPad magician is the here and now of corporate entertainment as event companies are constantly asking for modern, unique and 'wow factor' entertainment to make their event stand out.

"Also popular at the moment are LED shows, for many of the same reasons. LED shows offer cutting-edge entertainment and technology, with custom-made performances for each event.

"An old favorite that is still one of our most sought-after and enquired-about entertainment is 1920s themed shows/acts. We get a lot of bookings for 1920s/Prohibition style jazz bands, dancers and other performers."

Flops: "We don’t get inquiries for old-school cabaret acts, i.e., rabbit-out-of-the-hat magicians. Unless they have kept up with the times, there is not the market for old-school acts of this kind. We also don’t get requests for ska or rock bands, probably because people like to book music that has wide appeal."

Is the budget better? "Those clients that have increased budgets are booking bands with larger lineups, i.e., whereas before they would have chosen perhaps a four-piece party band, now they are opting for more musicians, singers and a more elaborate show! Also, clients are opting to book entertainment throughout the event instead of just opting for one act or show at the end of an event. We are seeing an increase in bookings for entertainment for the drinks reception, to mix and mingle with guests, during dinner and even as guests enter venues!"

Hits: "The hottest trend with our clients remains our firm's focus on customization of performance environments combined with thematic incorporation. Physical, aerial and musical artists are still our clients' desires, but more along the lines of TED innovation."

Flops: "Corporate Circus' had a nice long run, but for all intents and purposes of our clientele, it's over. Nearly everyone has had an aerialist on a piece of fabric, and many of them are doing it themselves at the gym or in 'yoga.' 2013 demands a reimagining of performances that have become overplayed by creatively synthesizing genres."

Is the budget better? "Acroback Productions is at long last happy to report a rebound in the economy. We are back to being able to offer and enact our creative services both to the extent we love to provide and our clients love to receive."

See the full story in the May-June issue of Special Events, which is available to ISES members for free and to subscribers. Not a subscriber? We can fix that; just click here.