The Magical Ingredient for Virtual Events 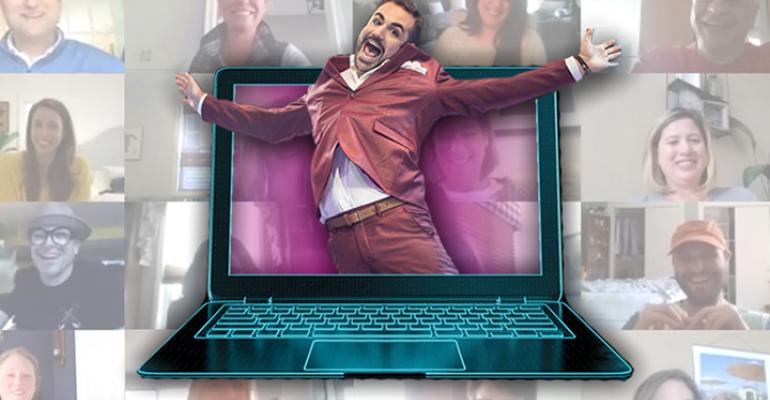 Hosting virtual events comes with a fair share of challenges for planners. Now that video calls and online meetings have become the norm, keeping an attendees’ focus on content can be easier said than done. A good rule of thumb to follow is that for every hour of a live presentation that holds an attendee’s attention, only about half that time will work in a virtual setting.

But there is a solution.

To combat waning attention spans while keeping attendees engaged, it’s important to provide your virtual attendees with time to take a breath, get refocused, and have a little pick-me-up...and that’s where entertainment comes in.

“Your brain simply works best when it gets to enjoy some kind of distraction and experiences relief from the business at hand,” said comedy magician Simon Pierro (simonpierro.com). “It’s in the very nature of magic, it temporarily transports you to a different world filled with astonishment and wonder. And it’s a bonding moment for the audience as well.”

By adding bite-sized entertainment breaks throughout your sessions, you will help your audience stay motivated to return to your virtual event.

“Imagine: suddenly, there’s a professional comedian and magician (that’s me!) with thousands of shows under his belt (still me!), interacting with everyone in the meeting, building a show based on the audience in real-time, cracking jokes and blowing minds, using the latest technology to incorporate all sorts of multimedia elements (can you believe it? still me!),” said comedian Harrison Greenbaum (harrisongreenbaum.com/virtual). “It’s going to wake everybody up, put them in a great mood, and hopefully be the highlight of their day/week/lifetime.”

Interaction is the key

There’s a plethora of entertainment that can be sprinkled throughout any event, including:

Whichever form of entertainment you go with, it is important to make it unique and engaging.

“If you have bands and DJs and all those kinds of things and all they’re doing is playing a show without any interaction,” said comedy magician Robert Strong (strongentertainment.com), “it’s an absolute waste of their time because you can find that on YouTube.”

Pierro mirrors Strong’s sentiments. “I think in the virtual world you have to be even more personable and energetic,” he said. “You have to find a way to emotionally connect with your audience through the screen.

“I don't ever want my audience to think they are watching a YouTube video or something that is pre-taped. It is my job to create the feeling that the audience is witnessing an event that is happening at this very moment, with and for them.”

It is that interaction that will keep attendees engaged, alert, and ready to get back to the business at hand.

“It’s really about making it so people can experience interactivity with a virtual event,” said Scott Frankel, President of Animatic Media.

Many entertainers have wholeheartedly embraced the new virtual element of performances, many of whom have even created production studios in their homes.

“I really enjoy the medium of virtual shows: it combines some of the biggest benefits of being on TV, such as being able to reach a large, global audience directly in their homes, with some of the biggest benefits of performing live, such as being able to directly interact with the audience and to have their reactions immediately impact the show,” Greenbaum said. “I’ve had a blast figuring out how to take my favorite material and make it work in this new medium and to create and work on new pieces that take advantage of the new format.”

Going virtual has also allowed many entertainers to rework their acts into something completely new and exciting.

“I think it’s important not to simply perform your existing repertoire in front of a webcam, instead of a live audience,” Pierro said. “I decided to create an entirely new show. Instead of leaving the audience with the feeling of ‘I wish I could have seen this live,’ I wanted to create an experience just as unique, that leaves them saying: ‘Wow, I’ve never witnessed anything like this before.’”

Virtual performances have given entertainers the opportunity to connect with audiences on a completely different level.

“Virtual platforms have enabled me to incorporate the audience even more. In a darkened theater, I can only see the first few rows, but on a platform like Zoom, I can see everybody who has their camera on, which means everybody is in the front row if they want to be,” Greenbaum said. “Also, my audience is watching from their homes or offices, which means the whole thing is more personal and intimate and I can customize and tailor the show that much more—I’ve always drawn a lot of comedy from my back-and-forth with the audience, but now I can see your kitchen, living room, or bedroom, too? We’re going to have that much more fun!”

The key to creating a great bite-sized entertainment piece is to make it personal and specialized to the audience at hand, Strong said. For example, jokes can center around a current project at work, or something about the company culture. And do not forget about the possibility of bringing in kids and pets into the fold since most attendees will still be sheltering at home.

“Everything we create is bespoke; we don’t just look at the camera and perform a magic act,” Strong said. “We can promote your product, create jokes that are just for you—each show is its own little, unique snowflake.”

Obviously virtual entertainment cannot replace live in-person performances, but it can go a long way in making attendees feel more engaged and valued when sitting in a virtual conference for hours on end.

“In the end," Strong said, "all you really want to do is create the best experience for the attendees."