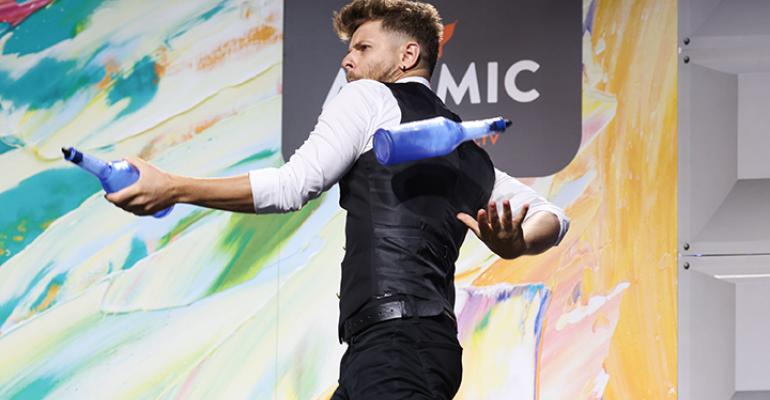 it was tempting to begin this article with a twee little quote from Cocktail…the horrific 1988 movie in which Tom Cruise juggles bottles and babes backed by a thumping soundtrack. But I…just…can’t do it. The movie may have opened the public’s eyes to the world of flair bartending in the mid-1980s to late ‘90s, but the recent trend toward spectacle within the cocktail industry is so much more than that.

After flair frittered away in the previous century, we had a serious decade or two: craft cocktails replaced Cosmos, and speakeasys triumphed over TGI Fridays. Beautiful things emerged: the spark of a match leading to the scent of burnt citrus peel. Slow melting, clear as clear ice cubes. Rows of dasher bottles housing specialty bitters. A stir with a proper swizzle versus a plastic straw.

As we emerge from the pandemic, however, the experience of spectacle, entertainment, the razzle-dazzle excitement of life, talent, and fun is on the rise. This trend is not necessarily “for volume,” notes USBG bartender Nigal Vann of The Berkshire Room in Chicago, “unless you have a dedicated person only making that drink”—but when you can do it: it is a surefire event activation.

Let’s take a look at where entertainment is no longer just on a stage or strolling through a crowd, but also finding its way behind the bar to the delight of captivated guests.

What is flair? Essentially, it is an offshoot of the thousands-of-years-old craft of juggling. Investigate it by pointing your eyes at TikTok, the pandemic darling with a billion monthly active users as of Q1 2021. Witness annelise_bartender7 of Flair University (288.8k followers) spinning bitters, bottles, and Bostons; valentinluca, a three-time World Flair Champion (212.9k followers) exhibiting a simple three club juggling pattern, but with 750s; yochew13_ (358.1k followers) flipping, shaking, and straining beautiful imbibes; and mdfkandi of The Cup Bearer, most recently seen wowing the audience at Catersource + The Special Event as part of Michael Cerbelli’s: The Hot List™ 2021, tossing bottles and taking (rapt) prisoners.

“When done well,” said Adam Rains via Tales of the Cocktail, “flair creates a visceral, dynamic, and exciting experience. A good ‘flair-tender’ is able to work the room like a DJ, raising the volume and tempo to bring the crowd to a frenzy.”

Will flair bartending—essentially tossing citrus instead of clubs and bottles instead of balls—captivate your audiences once more? “When it comes to flair bartending it really is the ultimate for bar experiences, especially at events where entertainment is everything,” says Justin Pasha of The Cup Bearer.

Pasha is so certain the future of flair is at hand he is working toward putting together a full line-up of “flairtenders” by spring 2022. “We’ll [be able to] provide the first ever choreographed flair shows for events here in the U.S.”

Chicago bartender Marco Montaguano, a noted flair professional, is also buying into the future of flair. Known for incorporating small blowtorches and flaming alcohol into his presentations, Montaguano says “I am starting my [own] craft flair program!”

First step for any mixologist who wants to add a little flair to their behind the bar routine? Practice with soft juggling balls before you pick up the breakables.

I first stumbled across a beauty of a cocktail by Justin Pasha of The Cup Bearer while attending the annual “Love Shack” party, presented by Marcia Selden Catering & Events and Ron Ben-Israel Cakes (February 2020). Seen again at Catersource + The Special Event 2021 during Michael Cerbelli’s: The Hot List™, Pasha served the rum-based Candela on stage, a delicious tipple with a smoky cinnamon topper that pops upon first sip. Pasha prefers the Flavour Blaster gun for the bubble execution, available worldwide and retailing for a tad over $400.

Of course, any beverage in a coupe will accommodate a smoky bubble: give non-alc drinkers in the crowd the most eye-catching of beverages to encourage low or no ABV drinking, for example.

Beyond the smoking gun, smoking boxes are still popular with bartenders and the clients who love the taste and drama of smoke.

“I put a new cocktail on the menu this summer [at Black Bear Distillery]—the Smoked Cherry Old Fashioned,” says bar manager Shannon Jackson. “I expanded that to Smoked Peach Old Fashioned and then added a Smoked Irish Cherry Manhattan.

“But,” Jackson continues, “it takes four to five minutes to make just one.”

“We use palo santo chips to smoke our top-shelf margarita-style drink as a featured cocktail at our bar in Fredricksburg, Texas,” says Tara Guthrie, co-owner and sommelier at Chase’s Place Cocktails + Kitchen.

A quick method to bring on the smoke with less effort is to pop a small chunk of dry ice into a cocktail, but always employ a small strainer or tweezer to remove the ice upon delivery to a guest. Or, make the dry ice block the stirring vessel, as shown in the accompanying photos (left) from a Proof of the Pudding event in late 2019. Boozy frozés are very instyle, and the spectacle of a quick freeze never tires guests. As always, ingesting dry ice is hazardous (use the utmost care with your guests)…but the performance—delightful!

Matches and flames are another popular means to entertain guests and enhance the senses. Flaming citrus peels are easy enough but bring on the culinary torches if you really want to draw a crowd!

Cocktails can be served with small sparklers, the sound of sizzle can be brought about with the addition of pop rocks, and flaming a spritz of alcohol such as vodka or other higher ABV spirits will produce a quick burst of flame.

There are several factors that go into proper execution of a champagne tower, Pasha notes. “Over the years we have had the opportunity to perfect all those elements such as structural integrity, strategic placement, and perhaps most importantly—timing. We have no doubt built more champagne towers over the years than anyone else in the industry which is why so many turn to us when they need what is inherently dangerous and risky, unless done right.”

The risk is real; see the sidebar on pages 42 and 43 to learn how to build your own, but when in doubt, calling in the experts is always the right decision.

Other ideas include unique pouring vessels and absinthe fountains, towering ice luges, and pedal-powered apparati, to name a few. All draw the eye and offer a sense of spectacle at any gathering.

“Simple things like using cotton candy in a glass before pouring the cocktail, cutting garnishes in a unique way, and lighting citrus oils on fire still wow the guest,” says Vann.

“I’ve worked in a few places where the aesthetics are among the top priority when creating cocktails,” says Vann. “This would include flavored ice, flowers and fruit in ice molds, custom glasses, cocktails inside of the ice or even interactive cocktails, where the client has to do something to drink it.”

“My experience [leans mostly on] craft stations at events [with] a plethora of fruit and herbs,” says bar and cocktail consultant and USBG Board member David Nepove, “allowing the bartender to customize a drink for the guests waiting in a long line, hoping to be wowed.”

This brings up the most salient point surrounding spectacle at the bar, “Multiple stations and options are a must when looking to entertain with visual cocktails,” notes Nepove.

My own opinion? You will always have me at technique. That beautiful stir emanating from the wrist instead of the forearm, that double strain, the extension of a pinky as the garnish is placed, the graceful arc of a Boston-to-Boston throw, the civilized gesture of one arm behind the back as the other pours liquid into a coupe without a drop spilled—that’s my happy place spectacle.

But at the very least, offers Rains, flair is “a vital component of our drinking history and there are signs that it’s coming back. In what form? Only time will tell. 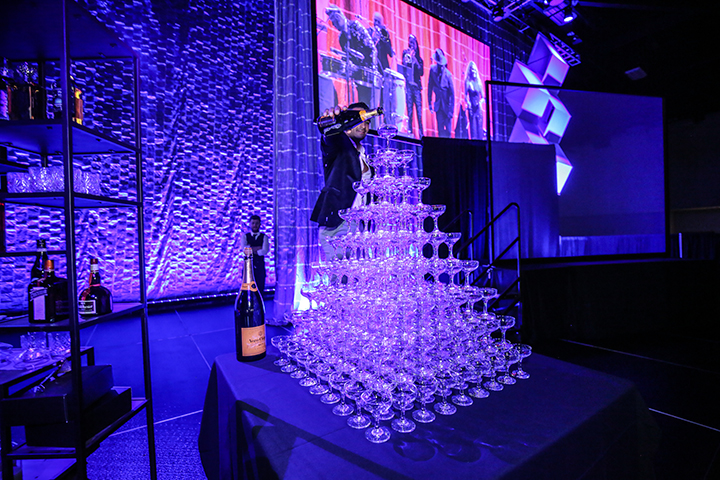 Justin Pasha pours a 9x9 champagne tower at Michael Cerbelli’s: The Hot List™. Note that he is elevated, putting himself above the top glass versus below.  Photo courtesy  WTA Photo via SpotMyPhotos

Build Your Own Champagne Tower

Structural integrity and perfect placement are key to a successful champagne tower, says Justin Pasha of The Cup Bearer. But, if you want to attempt building them on your own, below are the steps you will need to take. My suggestion? Start small. Just as beginning jugglers begin with one ball, tossing it back and forth from hand to hand, and then add a second, and then a third, building your confidence little by little will go a long way in the success of this project on a larger scale. 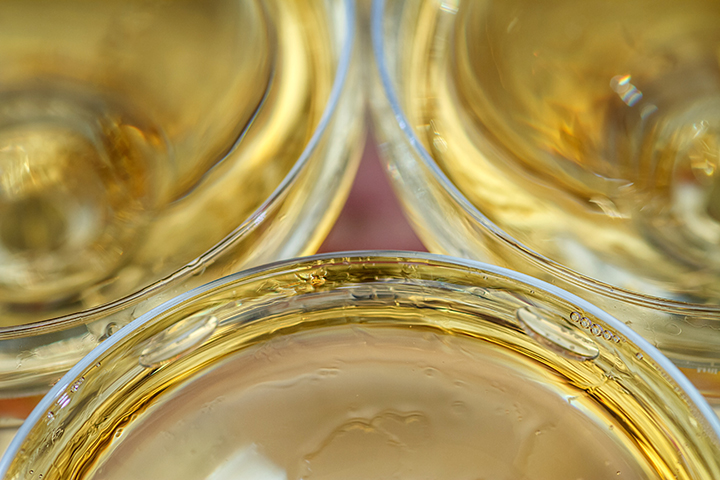 The rims of the champagne glasses should touch, so that they form a sort-of “diamond” pattern. Photo: INGimage

First, refer to the below chart: it will tell you how many coupe glasses you will need to construct the tower. Note that the glassware must be identical for the tower to be successful.

Make sure your base is exceptionally sturdy. The tower requires good structure and stability.

Determine your final height and width before you start building. For the chart, I used the Libbey 1924 coupe (#501308), with a liquid capacity of 4.75 oz. Maximum bowl diameter is 3.74 inches and height is 5.99 inches. I rounded up to 3.75" and 6" to make the math a touch easier. Your own glass selection may have a different measurement, be sure to update the chart accordingly.

A 750-milliliter bottle of champagne should fill about five glasses, so for a 30-glass tower, you will need 6 to 7 bottles, allowing for possible spillage or foaming. Pour carefully into the top glass, allowing it to overflow into the lower glasses, with those spilling into yet another layer and to the final layer. You will probably need to top some off or fill internal layers. Enjoy!