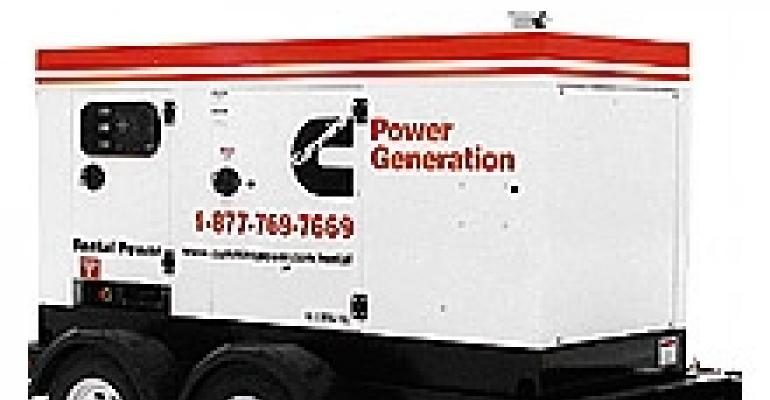 WITHOUT the juice to make them run, most events would go nowhere fast. But without functionality and finesse in equal measure, portable generators wouldn't find many fans among event producers. Smart power providers know their products can't just perform — they have to look good, lie low and leave no reminders of their presence.

Sure, ease of use makes Minneapolis-based Cummins Power Generation's 60-500kW portable power line a good bet for events, notes rental business general manager Larry Fetting. “These units are a great fit for those needing a product that is easy to set up and operate over a wide variety of voltages and in a wide variety of environments,” he says.

But what's most appealing about the line, Fetting contends, is its impressive package of event-friendly features. Created with a focus on “providing an optimal balance,” he explains, all units in the line combine quiet operation, smooth looks and long run time, and are available in a range of sizes to rev most special events into action. Fetting cites festivals, golf tournaments and the Minnesota State Fair as some of the products' core clients.

Does your event need power plus the sound of silence? Rancho Dominguez, Calif.-based manufacturer MQ Power answers the call for quiet with its Ultra-Silent series.

While the line debuted in 2004, it represents an “ongoing evolution” in technological upgrades, intended to expand versatility and satisfy “socially conscious” clients, notes MQ vice president David Brown. One of the line's most important features is its patented airflow design, which is “designed to lower noise levels by up to 9 decibels,” he says. There's also the Ultra-Silent's environmental containment base, which incorporates a fuel-level float switch and warning light. Brown explains that the base “captures fluids that are spilled during refueling or maintenance procedures, preventing soil contamination and wastewater runoff concerns.” And, because “getting equipment to the event is just as important as having it operate properly once on-site,” according to Brown, MQ also provides customized generator trailers that are “rugged, mobile and easy to operate.”

Among Ultra-Silent series' proponents is Fort Lauderdale, Fla.-based event energy provider Production Power. Operations manager Tom Tindell praises Ultra-Silent units as “the quietest and best performing generators ever,” noting that their 57-decibel sound level is the “equivalent of a cash register at about 10 feet away” or “just a bit louder than normal conversation.” Production Power started offering the Ultra-Silent series in 2006 and will switch out its entire inventory with the units, Tindell says. He recommends the generators for any event that requires quiet, clean, dependable power. Concerts stand to benefit from the units, which don't compete with the sound of music, Tindell notes. Ultra-Silents also are great for festivals because the units' low noise level makes it possible to locate them very close to vendor tents, cutting down on “excessive cable runs that cost you money” and limit available power, Tindell says. With a minimum of cable, event attendees are able to focus on the fun at hand rather than unsightly equipment on the ground. After all, with portable power, Tindell adds, “You want to flick on the switch, but you don't want to hear it or see it.”

Event power, no matter how quiet, aesthetically pleasing or eco-friendly, is not worth much if it cuts out mid-event. That's why Don Hobson, general manager of Mississauga, Ontario-based Showtech Power & Lighting, recommends doubling up on equipment.

Dual generators may not be a brand-new concept, but with today's high-tech event media needs, they're more important than ever. Hobson puts it this way: “It's just like with a car — you're going to get in that car every day for five years, and it will start every time. The one day when it doesn't start, you can get out and call a cab.” But when you are producing a special event, such as a major product launch involving live broadcast media, “if your one generator goes down, you're dead,” he says.

Yes, dual generators may add cost and require more space than a single unit, but the assurance they provide is well worth the outlay. “If one side dies, we can flip over to the other,” Hobson notes — good news if, say, your event happens to involve “a new product announcement that may be beaming to customers or shareholders.”

Whatever the event, Hobson says, the planner would be wise to allow his or her power provider to do what it does best. Instead of playing the role of go-between, “Put your electrical contractor directly in touch with your lighting, sound and catering vendors, so we can ask them the questions we need to ask,” he says. That way, you are free to “go off and do something way more productive.”