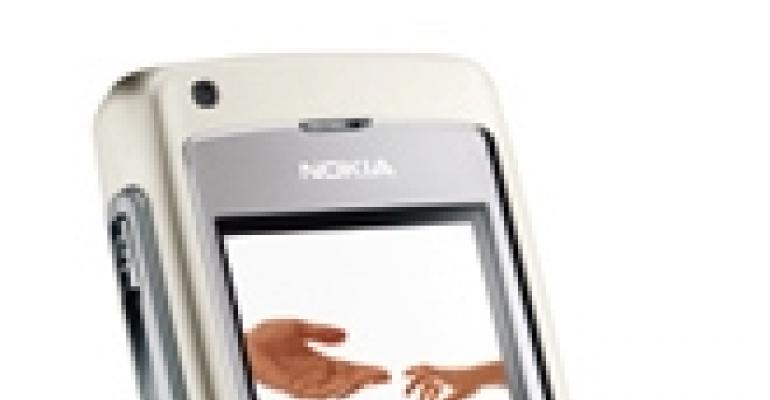 Available this summer, the Nokia N80 smartphone has international aspirations.

Like Nokia's 6682 — the phone-maker's most recent model up until the release of the N80 — the new Nokia gives users the ability to work with Microsoft Word documents, Excel spreadsheets and PowerPoint files, and allows users to send these files as attachments directly from the phone. The N80 also incorporates Bluetooth technology — allowing users to connect to external hardware devices — and the Nokia LifeBlog, which organizes images, videos and messages into a simple timeline.

Where the N80 excels, according to Nokia communications manager Camilla Gregg, is in the area of connectivity. Thanks to its “universal plug-and-play” feature, the phone connects “with TVs, PCs and audio equipment,” Gregg says. The unit acts “like a personal remote control.”

It also allows the user to connect with the office, clients and vendors from just about anywhere — a major boon in the booming international event industry. “Quad band support ensures that if you are based in the U.S. and need to travel to Asia or Europe, the phone will likely work, depending on your service plan,” Gregg notes. So, taking into account the functionality of the onboard 3 megapixel camera with flash and video capture, event pros can stay connected to the office when doing site checks just about anywhere in the world. As a result, they can “provide quick updates on venues or simply provide real-time communications to absent colleagues or clients,” Gregg says.

Operating on the Nextel National Network, the BlackBerry 7100i, launched in October by BlackBerry maker Research in Motion in a joint effort with Sprint, may not have globe-trotting as its goal. But that doesn't mean the unit is limited in scope.

With e-mail, wireless phone, personal organizer, Web browsing and Bluetooth capabilities, the 7100i is every bit the BlackBerry. At the same time, says Sprint vice president of marketing Vicki Warker, “This device is different from most BlackBerry devices because it looks and feels more like a traditional phone — including a narrower, smaller form factor.”

The 7100i also features SureType keyboard technology, which merges a phone keypad and QWERTY keyboard for comfortable typing and phone dialing. And the 7100i has walkie-talkie capabilities, both in the U.S. and abroad.

In the event that you're driving to a venue, client meeting or vendor warehouse, the new BlackBerry offers GPS (global positioning system) technology for real-time, audible, visual turn-by-turn driving directions. So even if you miss a turn and immediately need a new route to get to your 1 o'clock on time, the 7100i's TeleNav navigation system can update your directions and show you the right path to get you there with time to spare.

As the first device to utilize the Microsoft Windows Mobile 5.0 platform, according to account executive Lindsay Lipsitz, the UTStarcom XV6700 from Verizon Wireless is a powerhouse of productivity.

Microsoft's Word Mobile supports tables, lists and embedded images, and allows XV6700 users to create, edit and review documents, such as proposals and contracts. Meanwhile, PowerPoint Mobile lets users view and rehearse presentations while away from the office, while Excel Mobile enables users to create and view charts and graphs. And just in case you were worried about keeping all that data safe and sound, the XV6700, with its “persistent memory storage,” ensures that you “won't lose important information when the device runs out of battery power,” as it does after five hours of use or 200-plus hours of standby time, Lipsitz says.

On top of that, Windows Media Player 10 Mobile enables access to more than one million protected digital songs and videos from online services — all the better for planning one seriously rocking DJ set. Then there's the built-in Wi-Fi and “EVDO” (“Evolution Data Optimized” — the fastest cellphone technology available in the U.S.) wireless broadband network accessibility, which allows “event pros on the go to stay connected with their office, clients, vendors, friends and family,” Lipsitz says. Plus, XV6700's black face and silver, sliding QWERTY keyboard make it “a great-looking device any event pro would want to be seen with,” she adds. Throw in the XV6700's built-in two-way speakerphone, built-in 1.3 megapixel camera/camcorder and a “flight mode” that lets users turn off the wireless functions and work on files in Microsoft Office Mobile applications while on a plane, and you've got a phone that's smart, stylish and adaptable.