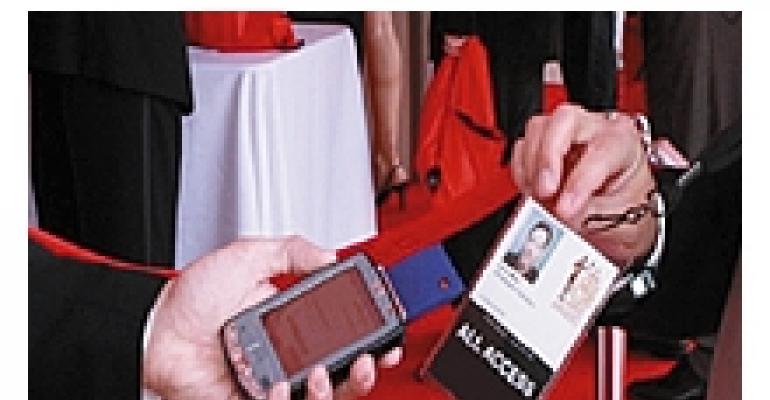 PARTY-crashers are nothing new, but today's heightened security is. Stephen Mark, managing director of Los Angeles-based EventCredentials, discusses the technology behind his company's electronic credentialing service. Since its debut in the late 1990s, the EventCredentials system has been used at star-studded events, conferences and trade shows for both its security and database-tracking features.

SPECIAL EVENTS MAGAZINE: What makes your services unique in the event industry?

STEPHEN MARK: As events get bigger and bigger, planners and their clients can benefit from efficient, cost-effective ways to register, manage and track relevant data on attendees. There's usually two different types of events that use our services, and for different reasons. The first type is extremely concerned about security. They want to use the service because it allows them to create electronic access records for each attendee, where that data on each attendee — like their driver's license number, their company name, their individual photo and, probably most importantly, the different access zones they're allowed to enter within the venue — is all stored in an electronic record.

The other type of event may not be as concerned with security but may be more interested in tracking which workshops or trade booths the attendees visited throughout a one-day event or a multi-day conference. They're really interested in using our RFID credentialing solution. RFID is Radio Frequency Identification. It uses a little chip that's attached to each of our credentials, and each credential for each unique attendee has its own unique chip. At conferences, RFID is really valuable because it allows the planners or their clients, after the fact, to create real-time, custom attendance reports for each attendee. So you can really mine that data afterwards.

Q: How does it work?

A: Event organizers and their clients can have access to every individual attendee's electronic record via the Internet. So they can view each attendee's record and make changes to the attendee's access rights they've been granted throughout the event. They can do this from anywhere they have an Internet connection. If some people are working out of one office and the client is working out of another office and maybe someone is even working from home, everybody on the team, through a password-protected site, can have access to the credential database. So that's one of the advantages of having a Web-based solution as opposed to one that might sit on a computer at the event planner's office.

A: The Golden Globes have used it for the last three years. We did the Clinton Global Initiative — their inaugural conference last year was a three-day conference. There were multiple sessions going on during the morning and afternoon, but there were a limited number of seats in each session. There might be 4,000 attendees, but for Sen. Hillary Clinton's presentation, all 4,000 wanted to go, but there's only 1,000 spots in that room, and there's three other sessions going on at the same time. So the organizer and the Clinton Foundation — the client — had to decide who are the most important people that are going to get those 1,000 seats, even though everyone there is a very important person. You have to have some control over it, or it will just get out of control. You don't want to make it whoever gets there first gets the seats.

Q: Can you give some real-life examples of how your service stopped a problem from happening at a special event?

A: One example that I like is at the MTV Movie Awards last year — someone went up to one of the production members and said, “Oh, that's real neat — do you mind if I take an electronic picture of that credential for a souvenir?” So they let them do it, and that person went and created counterfeit credentials, which looked, actually, pretty good. But they didn't have the RFID chip in it, so when they went to use those credentials at the perimeter entrance point, right at the beginning it was clear they were counterfeit when they were scanned. You can copy almost anything you want with graphic design nowadays, but there is no way to counterfeit the RFID chip.