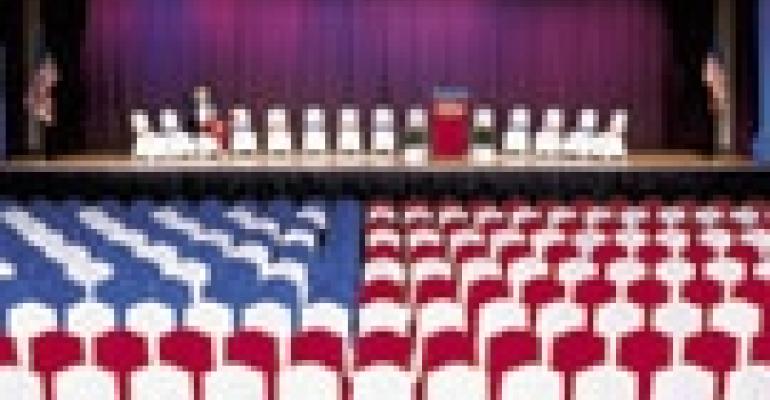 Tools of the Trade: Wonder Covers

Today's chair covers are doing a lot more than just dolling up dull chairs. When accented with accessories, enhanced by technology and treated as essential decor elements, chair covers can change the shape not only of chairs, but entire events.

According to Kayte Terry of Secaucus, N.J.-based Dazian Fabrics, shimmering metallics have proven hot with clients who want a trendy yet timeless look in chair covers. “We have some fabulous hologram and iridescent fabrics that would make an event really special,” she says.

Metallics are also moving at Atlanta's Tabletoppers, says director of marketing and sales Debra Taylor. From popular matte satin covers with sparkle organza ties, Tabletoppers has moved on to sparkle organza covers for chiavari chairs. “They're a bit expensive, so we're carrying them in gold and ivory for now,” Taylor says, adding that she'll bring in more colors as demand rises.

Michael Davis, co-owner of Spring Valley, N.Y.-based Cloth Connection, says “unique chair covers such as velvet and organdy” have done well at his company, which carries more than 50 styles of covers for many different types of chairs.

Difficult chairs don't daunt designer Nardi Hobler, president and owner of St. Louis-based Party Arts. In fact, they inspired her to design her “Couture” cover, which she likens to “plus-size dressing for chairs.” Especially useful with short, low, stackable chairs, the Couture cover is “a great big voluminous thing, kind of like an oversize pillowcase,” she says. Once the cover is gathered and tied with an organza sash, the back of the chair becomes the point of visual interest, she adds, “much like with the obi on a Japanese kimono.”

“I hate to see a covered chair,” says Laurie Beyer, president of Canoga Park, Calif.-based Affairs by Design. Instead, the designer says, she is interested in changing the shape and dimension of the chair with a combination of equipment and fabric. Most recently, Beyer created a PVC frame with Velcro straps that adds height and width to standard chairs. A chair cover in a “lime-green poodle fuzzy material,” which she designed to work on the expanded chairs, has been a huge hit with event guests. “People run up to it and want to touch it,” she says.

When it comes to preserving the life of chair covers, damage control is a top priority, says Mitchell Kelldorf, president of Scottsdale, Ariz.-based SculptChair. “Necessity being the mother of invention,” Kelldorf says, “we developed an award-winning polyethylene caster, which, when attached to the hem of the cover, dramatically reduces tears and stains.” He adds that casters allow for safe usage of stretch-to-fit SculptChair covers on patios, decks, lawns and other tricky surfaces.

Mitchell Bluethman, executive vice president of Ontario, Calif.-based Jomar Table Linens, advises hanging chair covers to avoid wrinkling. He says his company's covers have a small “buttonhole” opening at the top for just that purpose. Hanging may be “a little more expensive, because you have to figure in the cost of the hanger,” Bluethman says, “but it's worth it.”

“Chair covers should be washed using a method to minimize shrinkage,” adds Judith Metzger-Kramer, president of Paterson, N.J.-based Tablecloth Co. “Even a half-inch of shrinkage overall could affect the fit of the chair cover.”

Using the same ingenuity it takes to create a stylish seat, many chair cover makers have found ways to help clients out during the toughest of times.

Francesca Nilsen, president of Houston-based Distinctive Details, has created a line of “chair backs” that offer the same glamour as her company's high-end “Couture” line, but cost a fraction of the price. “They are a very affordable accent,” she says.

Kelldorf says SculptChair has extended its seasonal “You Buy 'Em, We Fly 'Em” promotion, where the company pays for shipping on purchases, to help clients during a tight economy.

Patriotic spirit and compassion for those affected by the tragedies of Sept. 11 are the inspiration for the “American Collection” being offered by Dazian Fabrics. “We have a star print, a flag print and some great coordinating solids in red, white and blue,” Terry says, adding that all proceeds from the collection will go toward Sept. 11 relief funds.