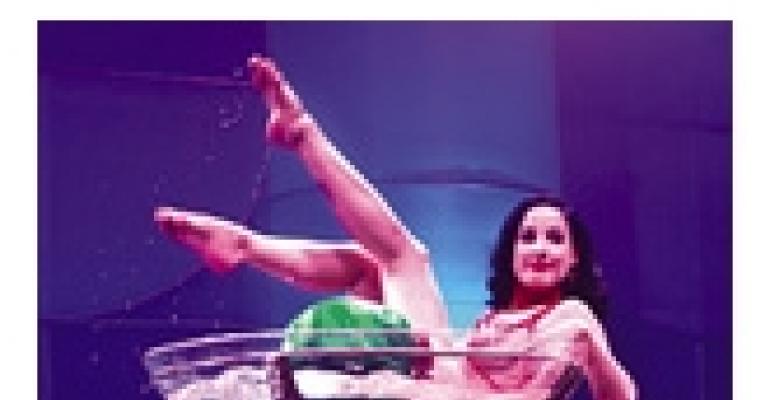 WITH sponsors to accommodate, A-list guests to please and a high-profile client to provide with a profitable party, the Lakers Youth Foundation Casino Night is one tall order. That's why Los Angeles-based Along Came Mary relied on its greatest strength — “teamwork … this is not a ‘me’ party,” says vice president Jane Downs — to give legs to the April event.

A longtime supporter of the Lakers Youth Foundation — the Los Angeles basketball team's organization benefiting a variety of youth charities — Along Came Mary was only too pleased to design, produce and cater the annual fundraiser for the third year running, Downs says. But doing so meant having to both trump past years' events, and make the most of lessons learned from planning them.

Giving the event a fresh look for 2006 fell to Along Came Mary event producer Cynthia Lopell. “For the last two years, the event has had a clubby kind of feel,” she notes. “I wanted to change that this year. I wanted to make it more upscale, more elegant, more of a real casino look.”

Highlights of the design included large-scale rigged panels featuring 3-D images of team players in action, which lined the sides of Santa Monica, Calif.'s expansive Barker Hangar. Reflecting light and warming the space were 10 custom crystal chandeliers and an appliqué-glass bar in smoky shades of Lakers purple and gold.

Freshening the event wasn't just about changing its appearance, Downs adds. There were also past years' logistical problems to address. For one thing, there was the traditional pre-event VIP cocktail hour, which had previously caused pileups in the guest arrival line. “Because the Lakers are so generous with how they price tickets to the event, so their fans can come, a lot do come, and they come early,” Downs says. Unfortunately, “early” had been the exact time that VIPs were having their exclusive to-do. To deal with the dilemma, Downs suggested opening the event's bingo tent early, to occupy guests while the VIPs had their moment. The early interest in bingo carried on throughout the evening, a welcome change from years past, when bingo saw participation fall off as guests gained access to other casino games inside the main venue. The result was a windfall for the Painted Turtle children's charity, the beneficiary of the bingo funds.

In another change from previous events, Along Came Mary revamped the VIP “gifting tent.” Because “it is really important that everybody feels like VIPs” at the fund-raising fête, Downs explains, “we don't want to parade people past the gifting tent and then say, ‘You can't go in there.’” Setting the swag tent in a discreet spot at the rear of the hangar, and stationing parking valets at the tent so gifted guests didn't march back through the main venue with their goodies, alleviated the past year's problem.

And enjoy they did, according to Downs. In the area of eats, revelers had their pick of four different buffets, with stations set up throughout the space, one station for every 75 to 100 guests. In addition to a “Spice it Up” station featuring Jamaican roasted chicken and warm cornbread-yam pudding, and a “Southwestern” station offering build-your-own blackened snapper tacos and from-scratch tamales, a “From the Grill” station provided slow-braised brisket and matzo kugel — an acknowledgement of the event coinciding with the first night of Passover.

A feast for the eyes, burlesque star Dita Von Teese titillated the well-fed crowd with her notorious “martini glass” routine, part of an entertainment lineup that also included aerialists and go-go dancers.

Of course, the event being a casino night, games were the draw. Most thrilling of the night's playtime activities was a poker tournament sponsored by online gaming Web site Bodog along with Las Vegas' Mirage Hotel and Casino, Downs says. For guests leaning toward lower stakes, arcade fare along the lines of Skee-Ball and “pop-a-shot” basketball joined traditional casino games.

The producer cites the mix of mouthwatering food and high-energy interactive fun as a hit: “To watch people eat and eat and eat and laugh — what else can we ask for?” she says, noting that when she left the event at 12:30, well past its scheduled end, the poker tournament was still in full swing.

Always one to learn from each event she produces, and apply that lesson to perfecting future fêtes, Downs says there is only one wish she might have had for the 2006 Lakers Youth Foundation fundraiser: more waiters. Even with an on-site team of nearly 150 well-coordinated event pros, including 88 food servers, wait staff had its hands full and then some, she notes.

But the veteran event-maker knows that a small sacrifice in staff numbers ultimately has its rewards. To ensure the lion's share of money raised at the event goes to good causes, she says, “even though you're not cutting it thin, you do want to keep things as lean as you can.”

A SELECTION OF TRAY-PASSED HORS D'OEUVRE