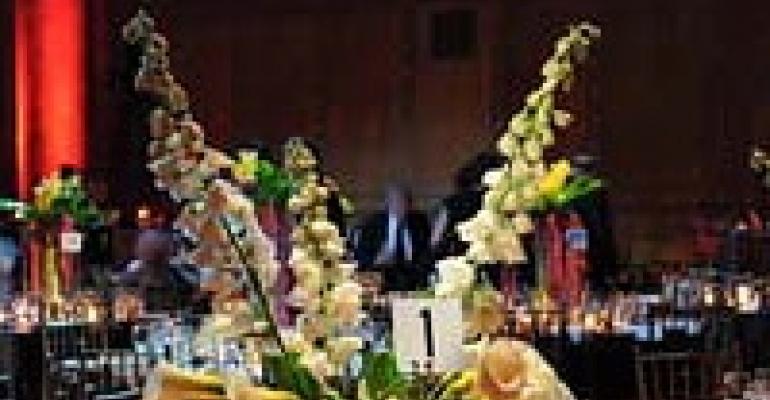 Sometimes dainty hors d'oeuvre just won't do. This was the case for a gala honoring the 130th anniversary of Boston's Archaeological Institute of America, the 60th anniversary of Archaeology magazine and actor Harrison Ford's movie role as archaeologist Indiana Jones. To do the trio justice, Andri Magdalena Cauldwell, AIA's development events manager, had to do some (ahem) digging to develop the perfect theme. The result? A gala with an ancient ambience that left no stone unturned.

MONEY MATTERS Before history could repeat itself, Cauldwell had to make a big decision: whom to tap to design the gala. When she started planning the event, she had not yet chosen a theme. Most designers she interviewed suggested a modern environment with ice bars, lighted cubes, palm trees and crystal decor, she notes. Their visions didn't jibe with Cauldwell's, who decided to create the event herself, at a tremendous savings to AIA.

Cauldwell settled on an “ancient civilizations” theme, then went to work saving AIA even more money by serving as florist. “Cutting out the florist and going straight to the distributor not only offers unbelievable pricing but also choices,” she says. The savings allowed her to go the extra mile in other ways to keep decor authentic. All the way to New Zealand, in fact. David Marchini of New York flower distributor George Rallis tracked down the perfect flowers to suit the scene, which required ordering waterlilies, a traditional flower of the Maya, from halfway across the world.

THAT'S ANCIENT HISTORY When you're attempting to re-create an ancient setting, not any modern venue will do. In fact, Cauldwell's venue needs were clear-cut: The interior had to resemble a temple. She found what she was looking for in the Capitale building in New York. The layout of the space then prompted a key decision — to present two different ancient civilizations at different points in the evening. So the event became a Greek cocktail reception followed by a Maya feast.

The Capitale's Corinthian columns and marble floors went a long way to setting a mood for the Greek reception. White roses native to Greece and a four-day Greek cruise giveaway added to the ancient angle, as did a living statue of goddess Minerva, holding an “Owl of Wisdom,” a symbol in AIA's logo.

Dinner, on the other hand, went tribal with a ceremonial feel. Cauldwell lit the room red, a color the Maya used in both temples and body paint. Dark linen and tropical floral displays sparkled with the help of blue pin spots. A Maya archaeologist lent his expertise to a design element by creating custom glyphs — Cauldwell used the symbols on the front cover of the program and the place cards. Maya descendant Patricio Balona provided a thematic addition by taking the stage and speaking to the guests in Mayan. And Harrison Ford added a glamorous note to the evening by receiving via video the Bandelier Award for raising public awareness of archaeology.

FEASTING, HOLD THE SACRIFICE The meal did more than simply reinforce the theme — it brought it to a new level. Cauldwell re-quested Capitale's executive chef, Jason Munger, use only vegetables, fruits and meats available to the Maya, a challenge he happily accepted, she says. “The items that the Maya did not have are, of course, the most popular cooking aids to today's chefs: olive oil, butter, cream and dairy of any kind,” Cauldwell notes.

Instead, the meal relied on foods recommended by Balona and AIA Maya archaeologist Ben Thomson that were a part of Maya life and mythology: corn, squash, citrus and pork. The latter, Cauldwell admits, was “a bold choice due to cultural sensitivities.” But Munger so impressed the event team with his roasted feral pork that they decided to take the risk and serve it as the main dish — to much acclaim.

And the entree wasn't the only conversation starter. The print menu provided a window into Maya mythology by detailing a corresponding piece of folklore with the description of each dish. And the after-party “was all about tastings,” Cauldwell says. The array included a nod to ancient ales with a Dogfish Head brew derived from cacao, just like the Maya used to make.

Roasted Duck on a Seared Corn Cake with Sweet Potato Puree
The Maya believed that the deities shed their own blood and mixed it with corn flour to make humans.

Roasted Feral Pork with Jicama, Yucca, Calabaza Squash and Poblano-Tomatillo Sauce
In the Maya creation story “Popol Vuh,” a squash was used to replace the decapitated head of the mythological Hero Twin to trick the gods of the underworld.

Maya Banana Split with Coconut, Pumpkin and Avocado Sorbets and Sweet Plantain Chips accompanied by Liquid Chocolate with Serrano Chile Powder
Cacao, given to humans as a gift from the gods, was so important that it was used as currency by Maya elite.