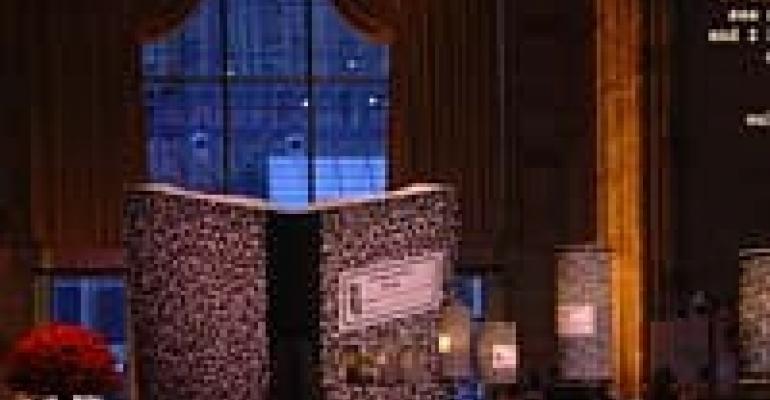 Fundraisers Save a Little, Spend a Little to Bring in Funds

Fundraisers rein in the spending &#8212; but splurge a little, too.

We know, we know — times are tight. Fundraisers, in particular, can't spend money willy-nilly if they want to stage profitable events. Instead, fundraising teams today work smart, picking and choosing which event elements to splurge on and which to save on.

A WISH TO BUILD A DREAM ON

FUNDRAISER: The Wish Ball, benefiting the Make A Wish Foundation of Illinois, saw its 20th anniversary in May at the Chicago Union Station in Chicago. The black-tie event drew a slew of celebrities, including comedians Jay Leno and Ellen DeGeneres, to help reel in 1,000 plus guests with tickets starting at $500 a person. The gross: more than $1 million, with a net of roughly $900,000.

WHERE TO SPLURGE: “Cutting back on the menus was not something we were interested in doing,” says Debbie Purcell, special events manager of Make A Wish Foundation of Illinois. So she tapped Chicago caterer Blue Plate to provide such dishes as a truffle salt-cured New York strip steak served with parsnip mashed potatoes and morels.

Another non-scrimp-able event item: the audiovisual system. With celebrities presenting auction items, the Make A Wish Foundation decided guests' ability to see and hear the celebrities was critical. The celebrity auctioneers also provided a nice touch of additional entertainment.

WHERE TO SAVE: Purcell credits Chicago's Kehoe Designs for creating stunning floral without the stunning price. In keeping with the Chicago theme, Kehoe placed small, unlit boxes on tabletops and put pillars with the silhouette of the Chicago skyline on top of the boxes. Kehoe then filled the pillars with water, floating candles and several roses. “The look was very dramatic and well within the budget,” Purcell notes.

Another savvy saving method: donated hors d'oeuvre. While Blue Plate made the main menu items, six local restaurants provided signature appetizers for the passed hors d'oeuvre “Taste of Chicago” portion of the evening. Not only did the move make the splurge on dinner feasible, but it ended up being a feature that will continue to be part of the event. “It was a great hit with attendees, and the restaurants were able to get great exposure,” Purcell says.

FUNDRAISER: A Pacific FantaSea — the Pacific Symphony's 30th Anniversary Gala featuring a shipwreck theme — took place in May at the Hyatt Regency in Irvine, Calif. Four hundred guests joined in, at the starting price of $1,000 each, to help the symphony net $1 million.

WHERE TO SPLURGE: The event team opted to highlight entertainment and food to keep guests engaged in the sea-themed soiree. Entertainment in particular made a splash with colorful costumed sea creatures from Imagination Entertainment in San Diego greeting guests, and aerialists flying onto the scene via a ceiling track. “Guests are still raving about the dancing crab, floating jellyfish, flying scuba divers and merpeople perched on gigantic sea rocks,” says Doug Simao, symphony volunteer and event producer. And rather than a local band, the symphony opted for headliner Bjorn Again, an ABBA tribute band.

For the evening's food, the Hyatt cooked up a menu of five larger-than-usual portions that were based on a menu from the doomed ship Titanic. “We even suggested that since we were eating on a shipwreck, there should be organic sea matter in the food,” says Kate Peters, co-volunteer and event producer. “We were kind of joking, but [chef] Greg Grohowski used seaweed in one of the dishes and included a gorgeous white chocolate seashell filled with chocolate for dessert.”

WHERE TO SAVE: “Frankly, our ‘secret sauce’ was our producers, who are super volunteers,” notes Ricki Shaub, the symphony's director of special events, referring to Simao and Peters. Great deals from vendors also helped, as did the less-formal vibe of the event compared with previous years' galas. Floral proved a money-saver, too, with Floral Creations by Enzo in Costa Mesa, Calif., forgoing exotic floral in favor of shells, seaweed and netting to create centerpieces.

FUNDRAISER: Forte Events in Colorado Springs, Colo., headed up Family Polo Day, held at the Colorado Springs School in May for 685 attendees at $20 a person. The event grossed $55,000 and provided scholarships to local military families.

WHERE TO SPLURGE: Safety is always worth a splurge, especially at a family-friendly event. “I always pay more to hire insured professionals for the bounce houses, the tents and the entertainment rentals,” says Forte CEO Tami Forero. “It's so much more convenient to have them provide the full service options including delivery, setup and manning during the event.”

Also, high-end restrooms proved well worth extra money at this outdoor event — Forero provided stylish and air-conditioned bathrooms “that everyone commented on,” she notes.

Branding was a focal point, too. Forero was able to negotiate a deal on custom logos, sponsorship kits, save-the-date cards and four digital billboards, but says this element still ended up in the “splurge” category. “However, we wouldn't have done it any differently,” she says, “since our outreach was very effective in raising awareness and attendance from the community outside those already involved with the school.”

WHERE TO SAVE: Forero anticipated children would make up roughly 50 percent of attendees and thus made sure to offer children's fare, including corn dogs and lemonade. The small portions of the fair favorites not only suited children's appetites but also kept costs down; adults noshed on items just a little more high-end, such as brats and Bellinis. An activity area for children also provided ample entertainment without the threat of busting the budget. Kids participated in face-painting, worked with balloon artists and decorated their own bandannas.

Forero also saved on rentals, deciding against paying extra to fence in the event. Instead, wristbands alerted vendors to paying guests. And rather than renting seating, the school provided bleachers, and guests were encouraged to bring their own blankets and chairs.

WHERE TO SPLURGE: President and creative director David Stark created a focal point for the gala with a giant composition book sculpture placed at the entrance to the event. “It effectively and definitively set the tone for the evening and allowed us to visually build on the concept of education for youth in foster care with the graphic black-and-white elements of a composition book,” he says

WHERE TO SAVE: Yet, the smaller decor items had a much smaller budget. To cope, Stark applied a do-it-yourself attitude to keep costs in check for elements such as votives, vases and luminaries. To carry out the theme of the oversized composition book, he printed a black-and-white pattern onto paper, then wrapped it around rented vases and votives. Stark then placed the items in groupings. “This can become pricey when you are working in the realm of custom design,” he says, “but it's much more cost-effective to use a DIY way of thinking.”