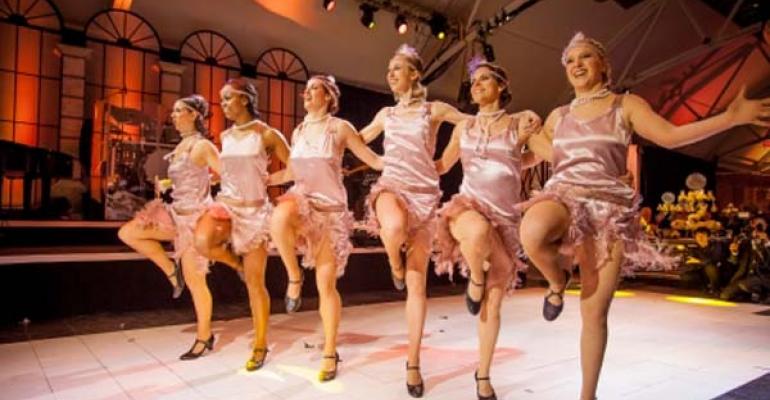 Five top producers of fundraising galas describe how the improving economy is affecting their events; while the outlook is better, clients are still reluctant to boost budgets.

Joann Roth-Oseary, head of Tarzana, Calif.-based Someone's in the Kitchen, says the improving economy has improved the mood of her gala clients.

"The improving economy is showing in not so much crying and wringing and wrenching about the budgets in general, and a greater acceptance of what things cost," she says, with fewer demands to just "make it cheaper!"

Roth-Oseary's clients are giving her somewhat bigger budgets to work with, but "they still need to see the bang for the buck," she notes. Specifically, she has put money back into lighting at some of her galas, an area that had been cut back during the worst of the recession. "Now we can put some money into that, which is a lot of bang," she notes.

Alison Silcoff, head of Montreal-based Alison Silcoff Events, has "definitely" seen a rebound in the success of her signature fundraiser, the Daffodil Ball, which benefits the Canadian Cancer Society.

"The 2013 Daffodil Ball net revenue was a massive 23 percent up on 2012, compared with an increase of 16 percent in 2012 and a decrease of 3 percent in 2011," she explains. In contrast, net revenue at the 2009 ball was less than half that of 2008, she says. Also, this year's Daffodil Ball was sold out with 700 guests and a waiting list—"the first time this has happened since the recession," she notes.

BUDGETS DON'T BUDGE Despite the strong performances of the most recent Daffodil Balls, Silcoff and her team haven't had significantly bigger budgets to work with. "Part of the reason for this is that it is not clear until very close to the event--about four to six weeks prior--that revenue is going to be significantly increased, so commitments for entertainers, decor, etc., have already been made," she explains. "But it does allow for small last-minute enhancements." For example, at this year's "Great Gatsby" themed event, Silcoff was able to add some extra decor in the cocktail area, and to buy 1920s-style headpieces for registration staff and dancers.

Clients of Shelly Tolo, head of Seattle-based Tolo Events, didn't cut their budgets during the downturn.

"They had the opinion, 'We're asking our guests to pay the same amount for their tickets, we want them to still receive the same type of experience,'" Tolo says. "That being said, if we were able to find a savings for the budget without having a negative or noticeable impact for the guest, we looked for it."

Tolo did see attendance dip a bit at some of her clients' galas, "but they still raised the same amount or more," she says. "Having less people at your event isn't a bad thing if the people who are in attendance are the right people."

WAITING GAME David Merrell, head of Los Angeles-based AOO Events, cautions that it may be some time before gala committees truly boost budgets.

"Because of the economy, we have been forced to find a wow factor even with smaller and more conservative budgets," Merrell says. "I just don’t think the benefit of these loosened purse strings is going to be noticeable for a couple of years."

"It's a blessing that the events are coming back," he says, "but it doesn’t mean they are doing to come back in a big way!"

"Corporations that stopped providing sponsorship dollars are now active in the gala market again, so overall attendance and revenues are up," she says. "However, the downturn that occurred beginning in 2008 caused most non-profits to immediately tighten their belts and reduce their overall spending on their events. These tightened budgets are still in place in most cases, despite the revenue growth."

Arzt notes a "spend here, cut there" dynamic at work.

"Galas are returning to hiring large orchestras again as well as supplementary entertainment--i.e., for receptions, etc. I do think that the cutbacks made a few years back in decor have not fully returned yet and most are getting by with less. Food costs have increased so a larger percentage of the budget is being spent on food and beverage. Many nonprofits have also cut back on printing elaborate gala invitations or have taken a serious look at the validity of their mailing lists. Others are now putting their program books and ad journals online."

FAVORITE FUNDRAISERS Many of the event planners interviewed have a special fondness for certain the fundraisers they have produced.

Roth-Oseary calls two of her longtime galas her "standouts."

The gala for the American Friends of the Hebrew University funds scholarships that "truly do benefit all mankind," she says. And at the "Rock for Teens" event, which benefits a teen cancer center at UCLA, "we bring down the house and raise multimillions for the kids. It's an up-close and personal and amazing evening."

While asking her which of her galas are her favorites "is like asking a parent who their favorite child is," Tolo points with pride to several of hers.

At the 2008 Evergreen Health gala, "the guests raised enough to fund the mobile mammography unit for the East Side of Seattle," Tolo says. "That's cool--producing an event where we have a direct impact on women's health in Seattle."

And she loved the entertainment at the 2009 Group Health Gala. "The theme was 'Moulin Rouge,'" she recalls. "We showed the 'Tango de Roxanne' scene from the movie on the big screens while dancers performed the exact choreography on the dance floor. I got teary-eyed during rehearsals for that one!"

See the full story in the September-October issue of Special Events, which is available to ISES members for free and to subscribers. Not a subscriber? We can fix that; just click here.

Gatsby Gala: Alison Silcoff Events Gins Up a 'Great Gatsby' Theme for the Daffodil Ball
May 08, 2013