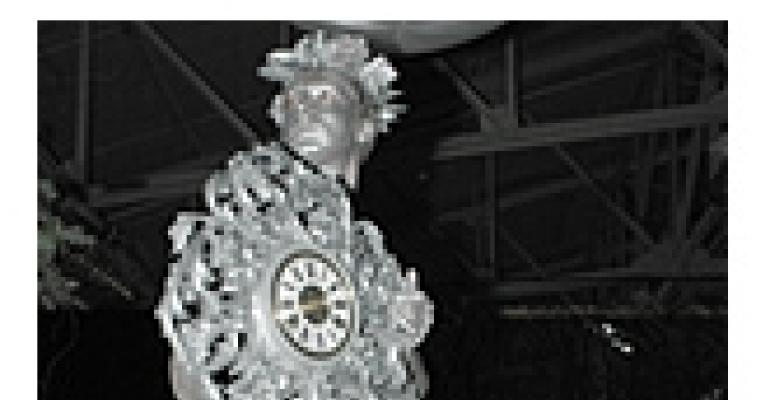 A GREAT CAUSE AMONG FRIENDS

WHAT started out as a low-key Academy Awards night house party with a passing of the hat to raise cash for AIDS sufferers has become one of San Francisco's premier benefit events. Along with transformation of the humble hat into a high-end auction, and a swelling of the original 30-strong crowd to a formidable 3,000, the Academy of Friends' annual awards-night bash seeks to position itself as the city's “best, most glamorous fund-raiser of the year.” So says Lynne Winslow, whose San Francisco-based Winslow & Associates has been producing the party for the past five years. For February's event — not just an occasion for raising much-needed funds to fight AIDS, but a celebration of the fund-raiser's 25th year — the stakes were just that much higher.

Pulling off the complex Nuit d'Argent (Night of Silver) event — named for its 25th, or silver, anniversary — required reconciliation of strict budget management with a flexible attitude toward the whims of the nearly one dozen independent designers who lent their talents to the cause.

Fundamental to granting the design crew freedom of choice was a savvy split of the Fort Mason Festival Pavilion into two distinct areas: a Louis XIV “fussy French” front area and a “high-tech” rear space, according to Winslow & Associates project manager Neil Figurelli. While an 18-by-24-foot screen flanked by drapery divided the two discrete spaces, the element of silver united them.

Allowed to select which room section best suited their tastes, and given a $1,000 budget each to work with, designers were set free to create vignettes, each of which housed food stations from participating Bay Area restaurants and caterers.

But all the freedom in the world wouldn't have let the designers realize their creative visions without significant contributions from critical in-kind vendors, Figurelli notes. These included the framed portraits, claw-foot tables, columns and Rococo mirrors that the American Conservatory Theater didn't just offer up, but allowed designers including Robert Fung of San Francisco's Taste Catering and Corralitos, Calif.-based Marc Mel to paint silver as needed. Decor pieces also included sleek furnishings from South San Francisco-based Cort Event Furnishings, which kicked in nearly $50,000 worth of goods.

As Winslow points out, pulling designers together to “shop” ACT's prop warehouses, or to confer on the best use of San Francisco-based Ohm Lighting's illumination skills, didn't just benefit the benefit. “It also makes it fun for the designers,” she adds. “They get to meet new people, get new ideas. It's a great thing we've done with a lot of events in San Francisco, getting people who would otherwise be competitors to come to the table and work together.”

That fellow feeling fostered during the planning process also was in effect on event night, when guests gathered at the Pavilion for the Oscars-viewing extravaganza.

In the Versailles-inspired front area, attendees nibbled at food and beverage stations and visited an auction area crafted by San Francisco designer Michael Morales with the help of fashion house Armani. Those who could staked out seats in vignette areas — including a lavish French garden space from San Francisco-based Melons Catering's Sheldon Sloan — clustered around nine large screens set up throughout the room. With all the good-natured show-heckling, cheering and conversation going on during the awards screening, “we couldn't do much entertainment,” Winslow says. Instead, her audiovisual crew broadcast Academy of Friends “commercials” during the program's station breaks.

The live performance portion of the evening came post-Oscars, when guests slipped past the curtains into the edgy “elemental silver” back room, where a staged spectacle included trapeze artists, opera singers and theatrical stars.

Even the evening's hectic farewell — a sudden downpour meant that the nearly 1,500 virtually identical black umbrellas that guests had checked needed to be sorted out and returned to their owners — couldn't put a damper on the event's good vibe. The Academy's board members, decked out in gala finery, did their part by pitching in to help, Figurelli says. “This is not the type of client that just goes and enjoys the event, and you never see them again.”

For Winslow, the satisfaction she and her associates derive from working on the event comes directly out of the challenges involved. “The designers come up with great ideas, then we have to figure out, ‘How do we afford it?’” the producer explains. “This event can't be produced without huge in-kind contributions from everyone. At the same time, we need designers to feel inspired. If we're forcing a look down their throats and asking them to donate, it doesn't work.”

Twenty years of involvement with charity events has taught her that the key is balance. “It's very much a collaborative process,” she says of Nuit d'Argent, which in the end raised half a million dollars for AIDS. “Yes, it's sticky and laborious, but ultimately it's for the good of the cause.”