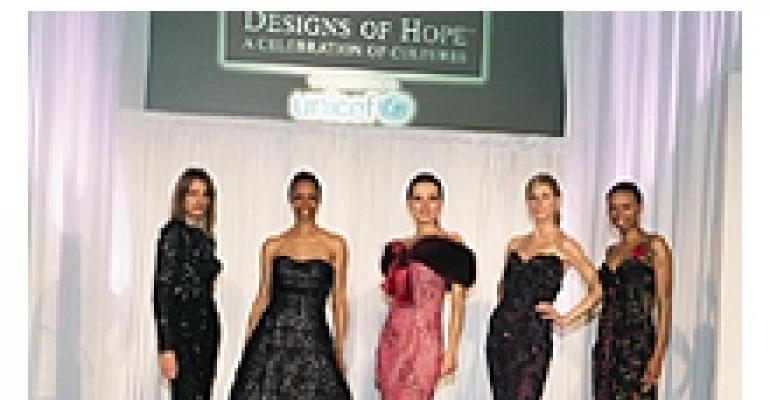 WHILE a corporate event firm's heart may be in the right place, says Marcy Manley, when it comes to choosing charity events to support, “You just can't be everything to everyone.” Instead, the president of Chicago's The Experiential Agency is both selective and wholly committed in her approach to altruism.

This year, as she first did last year, Manley chose to take up the cause of the city's second annual Designs of Hope event, held in March to benefit UNICEF's efforts on behalf of orphans and children affected by AIDS. Working with the equally dedicated staff — and around the serious event-space challenges — of host venue and event sponsor the InterContinental Hotel, Chicago, Manley's crew worked its well-placed heart out to help the fledgling fashion-forward event find firm footing.

While Manley is quick to point out that the hotel “couldn't have been more supportive of us and of the event,” the property's ballroom wasn't quite as cooperative.

That's not to say the Old World space wasn't spectacular. But with its “traditional chandelier-and-gold-leaf elegance,” as she puts it, it wasn't ideally suited to an event planned with a global-culture theme and a high-tech fashion show featuring hot local designers.

During the event's four-month lead time, Manley and staff hammered out a design and production concept that sought both to downplay the room's regal aesthetic and to work around its many sightline obstacles. At the same time, the team wanted to offer attendees a completely different atmosphere than they'd experienced at last year's benefit, held in the exact same space.

A T-shaped stage and runway configuration formed the layout's foundation, and maximized sightlines for the 72-inch rounds filling the ballroom's main floor and balcony area. Also helping create a focal point was the stage's large central screen — a departure from last year's ring of plasmas.

Meanwhile, a minimalist, Asian-influenced decor scheme that hinged on monochromatic table linen and centerpieces of grass, rock and floating candles helped make the most of scanty budget dollars while infusing the room with a modern feel.

It wasn't the look of the space, however, but the way it was used to accommodate auctions, entertainment and the much-anticipated fashion show that secured its success.

Before they even entered the main ballroom, the event's 400-plus guests got their first taste of a transformed setting in a separate cocktail reception and silent auction area. Here, instead of displaying the more than 50 auction items around the perimeter of the room in traditional fashion, Manley's squad created a central, circular, gallery-like display station using an assortment of highboy, cabaret and long tables to show off original artwork, tickets and gift certificates. Performances by the Chicago Children's Choir underscored UNICEF's child-centered mission, while a Japanese koto player stayed in the spirit of the understated Asian motif.

In the ballroom, where guests sat down to a sumptuous plated dinner featuring such internationally inspired creations as Mexican corn bisque with Bahamian crab timbale, actor Laurence Fishburne raised the event's profile with his powerful presentation. A live auction raised the stakes even higher, offering up such premium prizes as vacation packages, a photo session with Gilles Bensimon of sponsor Elle magazine, and a shiny new Porsche.

Next came a surprise interactive performance by the Three Waiters, who blithely worked all floors of the room, dodging obstructions such as support columns. The show was a big change from the previous year's acoustic musical performance, and a highlight for the audience: “Typically, they expect everything to happen onstage,” Manley says. “This year, we brought it into the house.”

Capping the evening was a fashion show featuring the work of 17 trendy and up-and-coming Chicago designers handpicked by UNICEF for their colorful, culturally significant creations. “We were not going for the little black dress here, but for real creativity,” Manley notes. “We wanted to show fashions that fit with the theme, as opposed to the new short skirt of the year.”

While work on the event took “a huge commitment,” Manley notes, it was a commitment The Experiential Agency was willing to make — and will make again next year as it assumes production responsibilities for Designs of Hope 2006.

The reason it can afford to get behind such projects so wholeheartedly is that it picks its charity partners so carefully. “We do UNICEF, the Children Affected by AIDS Foundation's Dream Halloween and Chicago Gateway Green [an organization that supports the city's beautification projects] every year, and call it a day after that,” Manley says. “We pick the ones we believe in, stand by them, and support them to our full capacity in terms of staff and resources.” While limiting her company's charitable work means she must turn away many worthy requests, it also means that the events she does accept get unlimited attention — attention that helped the second annual Chicago Designs of Hope event raise more than $435,000.

Soy- and Brown Sugar-roasted Salmon on a Bed of Wasabi-whipped Potatoes, with Vegetable Chiffonade and Haricot Vert Wreath