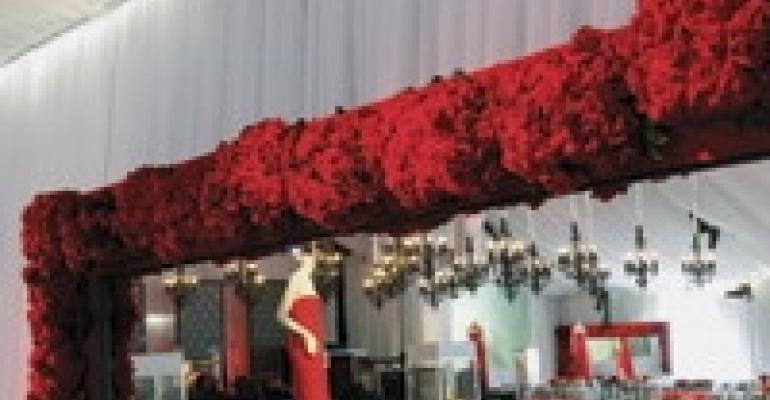 The April fundraising gala benefiting children's charity Father Joe's Villages was a special occasion in more ways than one. Not only was the event a first-time effort, but it marked the first time ever that gala host and event venue Valenti International — the decidedly upscale and famously discreet Rancho Santa Fe, Calif.-based matchmaking firm — opened its doors to outsiders. So when event producer Tom Bercu of Los Angeles-based Tom Bercu Presents came in to replace the gala's first planner after client Irene Valenti decided a change was needed, he knew there was nowhere to go but all out.

“I shattered it all,” Bercu says of the original event design. “Broke it apart and started over.”

Though the event's theme was based on the gowns of fashion designer Valentino as the client directed, Bercu notes that the original layout was slated to be “crammed in a small tent, with cheap linens.” Instead, the new producer went posh, adding glamour, glitz and scale, scale, scale.

His first move was to ramp up the size of the modest main space tent to 8,000 square feet. The extra room allowed for a switch from the originally planned — and oh-so-ho-hum — standard rounds to 96-by-48-inch rectangular tables.

Next came the incorporation of dramatic decor elements, all of them in line with the event's bold black, white and Valentino-red palette. Highlights included a grid of 21 black crystal chandeliers suspended from white fabric overhead. Another element eliciting “ahhhs” from event guests were seven 15-foot-long mirrors framed with thick bands of red roses — the only bloom on display throughout the gala — mounted along the tent's white dupioni-draped walls.

Bercu even incorporated the floor beneath guests' feet into the evening's high-glam aesthetic. “Since the tent was so large, there was a 10-foot drop from one end to the other,” he recounts. To conceal the vital subflooring inexpensively — this was a charity event, after all — but keep the requisite glamour, Bercu sourced black high-gloss theater flooring from Moorestown, N.J.-based Harlequin Floors. The sleek, liquid-looking floors didn't just bring a uniform appearance but also provided a perfect reflective surface for the sparkle of the chandeliers.

At the “Valentino at Valenti” event, the chandeliers weren't the only sparklers.

One of Bercu's biggest challenges was finding a solution to the problem posed by the evening's “45 years of Valentino” fashion retrospective. “It was originally supposed to be a fashion show displayed on mannequins,” the producer recounts. But when standard mannequins proved too blah for an event of the gala's caliber, a switch to live models positioned on platforms bubbled up. Finally, “Corporate pulled the plug on that,” Bercu says, noting concerns about how perspiration and makeup might damage the rare vintage Valentino gowns slated for display.

The solution: Bercu suggested Swarovski crystal mannequins. The crystal-encrusted figures were “a happy medium,” he says, providing the proper glamour quotient to set off the gorgeous gowns along with a pristine draping surface.

Of course, the event's more than 260 well-heeled guests added plenty of their own bling to the bash. Noting the proliferation of “gowns, tuxedos and champagne,” Bercu says, “It was difficult to believe that this was a tent, with the millions of crystals, diamonds and other fine jewels casting sparkles of light throughout.”

He recounts that the evening — highlighted by a dinner of Waters Fine Catering's pan-seared black sea bass and tortelloni with white-truffle cream sauce, an appearance by the beneficiary charity's Father Joe Carroll and a spectacular auction — “left no eye dry, no pocket full.” And at the end of the night, when the legendary Chubby “The Twist” Checker took the stage, “no seat occupied,” he adds.

If there's one thing Bercu learned from this event — well, besides the power of a simple, sophisticated color scheme and the satisfaction of working with a large staff of “wonderful volunteers” — it's that business can come from the most unlikely sources.

In the case of the Valenti gala, Bercu's client referral came from his hairstylist. “He called and said, ‘Tom, I have a lady here who wants to do a party,’” Bercu recalls with a smile. “I'm thinking, ‘It's a soccer mom who wants to do a mitzvah or a Sweet 16.’” Instead, the event turned out to be a career highlight that gave him a host of challenges he says he enjoyed overcoming. “Because the client was a perfectionist, I wanted her to walk in and say, ‘This is exactly what I wanted,’” Bercu says. “And she did.”