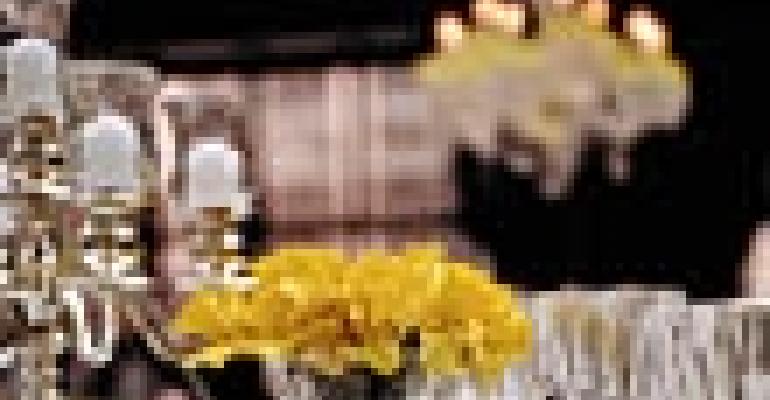 WHEN IT COMES to keeping Montreal's biggest fund-raiser fresh, 55,000 daffodils will go only so far. Alison Silcoff, whose Montreal-based Alison Silcoff Events produces the Daffodil Ball for the Canadian Cancer Society, says original decor concepts, ever more extravagant raffle prizes and a willingness to welcome new vendors also play critical roles. And she should know — she's been coordinating every aspect of the event, not to mention acting as the force behind its fund-raising campaign, every year since its inception in 1994.

Silcoff cites the April 2003 ball — a multiple Gala Award winner — as an example of the kind of event reinvention that keeps donors coming back for, and contributing to, more.

The event theme, inspired by Madame de Pompadour, the famous mistress of France's King Louis XV, “was a very big departure for us,” Silcoff says. Knowing that only an unforgettable event would allow her both to top the previous year's $1.5 million (CDN) net proceeds and to provide the momentum for future fund-raisers, she brought in New York-based designer Dick Walsh for the first time.

The creative mind behind the lavish nuptials of singer Celine Dion, Walsh suggested a theme keyed on the exuberant excesses of the 18th century. Silcoff, having seen a Madame de Pompadour exhibit in London on a recent business trip, pitched the idea of incorporating the famous marquise's “wonderful ribbons and ruffles and bows — lots of gold, lots of lace, and chandeliers dripping with crystals.” The result: “Pompadour and Circumstance — Un Bal a Versailles” was born.

Then came the hard part. “The biggest thing was the chandeliers,” Silcoff explains, 65 of which were slated to be suspended — one over each dining table — in the evening's most dramatic decor highlight. After ruling out rental companies, which didn't stock such elaborate pieces, and then attempting — and failing — to craft authentic-looking chandeliers in-house, Silcoff finally stumbled on a find: “Home Depot!” she says. “They had fabulous-looking plastic chandeliers that cost us about $140 each, which was quite reasonable.” So convincing were the plastic versions, “One of the guests wanted to buy one,” she laughs.

The guest with the unlikely request was among 650 attendees who donned their finery and flocked to Montreal's historic Windsor Station for the opulent affair.

There, for the price of a donation of at least $2,000 plus the cost of tickets, attendees didn't only marvel at the chandeliers, they watched them drop from the darkened ceiling in a surprise reveal. This effect came courtesy costumed ballet-student volunteers who stood tableside. When cued by the famous Elgar theme “Pomp and Circumstance,” the dancers lowered the light fixtures by rope from an intricate wire grid — constructed because the venue offered no permanent rigging points.

Silcoff stresses that the event's many attractions would be impossible without supplier support. “Everything I can possibly get donated, I do,” she says. For the Pompadour-inspired event, gratis goods and services included Walsh's decor work as well as printing, graphic design, champagne and site rental. Also credited with contributing were the 20 floral students who volunteered for setup help, “and they were thrilled to do it,” Silcoff says.

Reminding suppliers of potential rewards helps, she adds. “I let them know they will be performing or showing their stuff in front of major companies. If they do well in front of the presidents of the biggest companies in this country, those people are going to say, ‘Who was that? I want them at my event.’”

While Silcoff prides herself on putting on a great party, she contends that the fund-raising part of the project, which accounts for “80 percent” of her time during the event's yearlong planning, remains closest to her heart.

Unlike many benefit producers, Silcoff maintains a comprehensive donor database for her client. She also helps draft personalized donor letters and determines who should sign each one. “The key thing with fund-raising is who asks for the money,” she explains. “If you can get somebody who is a major customer of a company to ask that president to give money, it's very hard for him to say ‘no’ if the person asking gives him millions of dollars in business a year.”

Also under her watch is the coordination of raffle prizes, which at the 2003 event included an $80,000 safari adventure and a $20,000 New York weekend for six. The prizes were just part of an effort that raised a net $1.58 million for Silcoff's grateful client.

While such a demanding project undoubtedly is exhausting, particularly since through it all Silcoff maintains her job as a corporate event planner for clients in Canada and Europe, the producer can't imagine giving it up. “This is my baby,” she says. “I love doing it.”

Turn to page 57 for a list of resources for this event.

Scallops and Lobster on Celeriac Mousse with Truffle Oil

Snails with Nettles Baked in Phyllo Pastry on Parsley Coulis