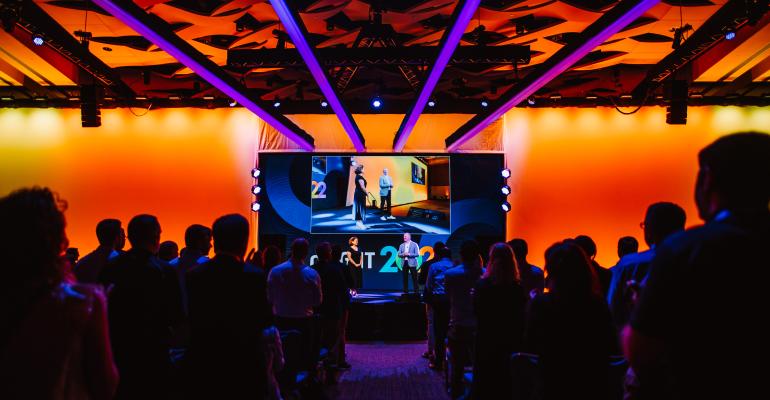 Start Slideshow ›
Immerse your audience with the right stage design

An audience of software conference attendees watches a presentation begin in a slightly dull, straightforward corporate manner. The room is dark. Slides loop on the screen. We’ve seen this before. Suddenly, a whooshing noise draws eyes upward. Colorful lights illuminate overhead and begin flowing toward the stage. The presentation has taken a turn and the audience is immersed in the action: 60-foot LED screens draw eyes across the room; wall-to-wall and floor-to-ceiling lighting and sound capture the attention of the audience; a thrust stage juts into the audience and the speakers walk into the seating area like Mick Jagger on a rock 'n roll catwalk. This is no longer a simple corporate presentation but an immersive experience.

This real-life production of nCino’s nSight conference programming demonstrates how the right approach to stage design can make or break an event. From your technology to your team, there are certain aspects of stage, sound, and lighting design that must be incorporated to create a show that audiences will be talking about for months.

In a post-pandemic world, however, creating an over-the-top elaborate stage production is not always possible. In 2022 and beyond, taking events case-by-case and assessing whether to scale back is crucial. Joy Matheny, Senior Producer and Marketing Manager for The Special Event Company (TSEC), who produced nSight, knows that event planners can’t necessarily keep up with client demands.

“People are coming back and wanting to have events with a vengeance,” she says.

“Is it worth spending the extra money to accomplish something that we think is going to be difficult on the timeline we have?”

Gray says the goal is to create an incredible event and not necessarily get lost in the details. Funneling time, energy, and resources into creating quality over quantity can save you from getting in over your head.

Scaling back to focus on what Gray calls “surprising awe moments” can deliver the same outcome as splurging on every detail, if done properly. Create a strong opening sequence or choose one area to pour intent into—for this event, they chose dramatic transitions that utilized sweeping color changes with the brand’s palette. By focusing on theatrical moments, you can create high-impact memory-making features that the audience will absorb and remember.

Creating a solid production plan and working out the kinks in pre-production will save a lot of time and stress during the event. Designing your stage, planning for your site constraints, creating a themed concept, and organizing AV and other effects are important parts of pre-production. Suzanne Down, Founder and Producer of Cirque Berzerk, says that she often uses mood boards, Pinterest, CAD drawings, and “lots of shared Google folders” to start creating a concept and share looks and inspirations between teams. Once the design details have been fleshed out, creating a solid production schedule and budget will keep you on track with your goals.

One step that is often left out of stage planning is pre-visualization, but Gray says that this was the most critical part of their success with nSight. Since many long-time professionals have left the industry post-COVID, it was important to assemble the team ahead of time and test how everything came together before even going to the venue. Gathering the lighting designer, creative director, tech director, script, and sample assets of everything used in the show and putting them to the test allowed the team to refine and perfect their design so that when they showed up to rehearsal, they were left with only a few manageable items to tweak.

“It’s much more cost-effective to have a small group of designer operators in a room for three days than it is to pay for a crew of twenty, thirty people on site for programming,” says Gray.

A long arcing trend, immersive events are popular as ever. Gray describes avoiding a 2D stage set, where everything happens on a simple stage, preferring a 3D show that utilizes the entire room and wraps around the audience. LED columns and overhead lights can guide the audience’s attention as well as the programming, such as during transitions, and to focus an audience’s attention on which part of the stage to watch. Audio cues can also move eyes around the room, so no one misses dramatic moments. For nSight, TSEC used massive LED screens to treat everything upstage like a massive white cyclorama, putting the focus on the speakers while colors around the room shifted the audience’s mood.

Down echoes the importance of immersion: “Proximity to the audience is a significant consideration. I find that the more you can break the fourth wall and have the audience feel immersed in what's happening around them, the easier it is to bring your audience on the journey with you.”

Beyond immersion, there are myriad types of technology to create dramatic effects. Down says she approaches any show design with two questions, one of which is, “What are the technical requirements needed to best support the acrobatic, cirque, or dance performances we are bringing?” Down advises choosing only a few theatrical elements to focus on: “Know when less is more. Resist the urge to use that special stage effect too much. Effects like ground fog, pyro, rain curtains, cryo blasts, etc., are much more effective when used sparingly.”

Down says that stage design and technological effects should be a supporting factor for your overall narrative. “Make it interesting: I love an unconventional stage design. Make sure it supports what is going on from a technical standpoint; consider stability, stage surface, and vertical clearance to the lighting grid. Make sure you have enough clear space. I love integrating fun stage effects (like pyrotechnics), but make sure the effects support the story you are telling.”

Focusing on only a few over-the-top techniques can also help you when you run into challenges—and run into challenges you will. Gray advises preparing for variables you know you won’t be able to control...ones that you usually find once you’re on-site—and even mid-programming.

“Inevitably things will fail,” says Gray. “Know when one is none and two is one.”

Have a backup plan for every element of design: multiple rigging options, multiple projectors—whatever you won’t be able to touch once the room is filled with thousands of people. Utilize your team as well: hire a diverse set of talent who knows what to look for that you might not necessarily think of.

Creating a narrative that your audience can relate to

Technology and effects can only get you so far if you don’t have content that is engaging at its core. The other question Down uses to begin show design is, “What story are we telling?”

For Haute, one of the first steps of their award-winning event “‘Arabian Nights’ 2020 Amway China Leadership Seminar and 25th Anniversary” was researching the audience. Ted Bowers, Strategic and Technical Consultant, notes that they invested in a lot of research to develop new concepts that addressed the taste of their Chinese guests, as well as the client's purpose and the iconic value of the location.

“It’s the audience's response that counts. Our goal was to ensure guests had an unforgettable, exciting experience in each collaboration and that meant a stage design to support and complement the entire event,” he says.

For the audience, that meant including magicians and an international performer who could sing in Mandarin.

One of Down’s events, Wella’s Beauty Envision Awards, drew the audience in through a story of society rising from the ashes of all the catastrophes of 2020 and a disconnected pre-pandemic world. “You must engage the audience emotionally to bring them on the journey with you,” says Down. “If you don't connect on that level with an audience, you have lost them.”

With proper preparation and a combination of technology and narrative, you can set a stage that attendees are sure to remember.