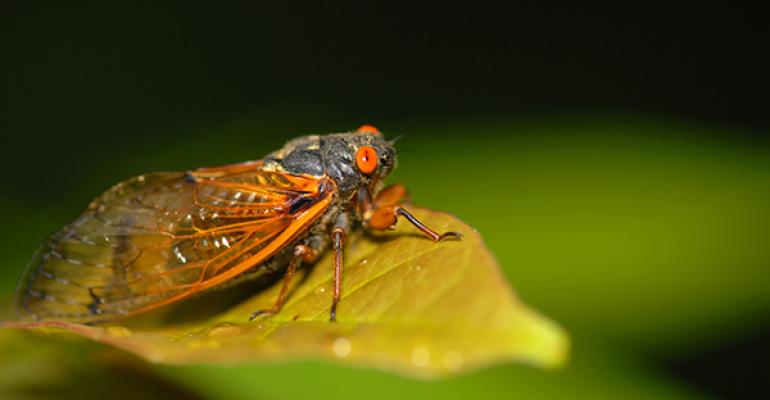 Special events in Ohio, West Virginia face masses of cicadas in May thanks to a "17-year" outbreak

Holding an outdoor event in Ohio or West Virginia this month? Get ready for a couple million extra guests.

It's the magic time—that is, once every 17 years—when cicadas, which are cousins of leafhoppers and spittlebugs, emerge from their underground tunnels to sing, mate, lay eggs and generally hang out.  According to the Wall Street Journal, 12 of the 15 known "broods" of cicadas in the U.S. emerge every 17 years, while the other three emerge after 13 years underground.

Cicadas don't damage plants, and scads of them are eaten by predators.

For special events, however, the sheer number of emerging cicadas is a hassle. Their habits of chirping at 90 decibels and leaving piles of carcasses lying around (they die after mating) can wreak havoc with special events.

The team at Edison, N.J.-based Miller's Rentals told Special Events in 2007 about the "tented wedding of the year" that was plagued by the critters.

"I'm not talking about a few pesky insects,” said Karen Rosenthal Schneider, sales manager. “I'm talking about millions of these beetle-like creatures, each about 2 inches long with gigantic red eyes and yellow legs, swarming down the entire Eastern Seaboard for an entire month."

For days preceding the wedding, the grounds crew at the venue--a historic mansion--used wheelbarrows to cart away the carcasses, Schneider reports.

But the bride's family kept its sense of humor: “They even had custom cookies in the shape of a cicada placed at each guest setting,” Schneider says.