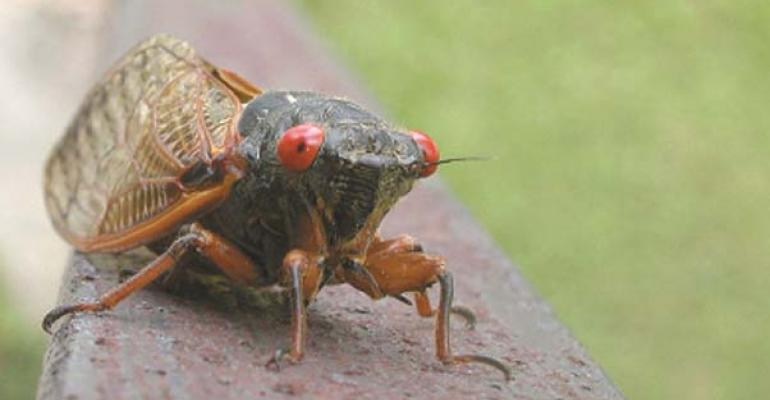 Calling the cicadas, party of 200,000: Cicadas will be party-crashers at special events in the Northeast and Mid-Atlantic soon. Photo by iStockphoto.com/ c Ryan Fardo.
Event Types

Beware, it's Brood II! Cicada Swarms Due in U.S.

Special event planners on the East Coast and Mid-Atlantic must prepare for cicada swarms this month, when millions of insects will emerge from the ground to plaque parties.

In 2007, the Midwest had them—now, it's the East Coast's turn. Just wait a week or two, the experts say, and thousands of red-eyed "periodical cicadas" will emerge from the earth in part of the eastern U.S.

A quirk of nature, the groups of cicadas surface only once every 13 or 17 years, depending on the species. The Midwest was overrun with the chirping, breeding frenzy in 2007, and Brood II will make its debut in the Northeast and Mid-Atlantic area later this month, experts say.

The bugs are largely harmless, but their habits of chirping at 90 decibels and leaving piles of carcasses lying around (they die after mating) can wreak havoc with special events.

You have been warned.