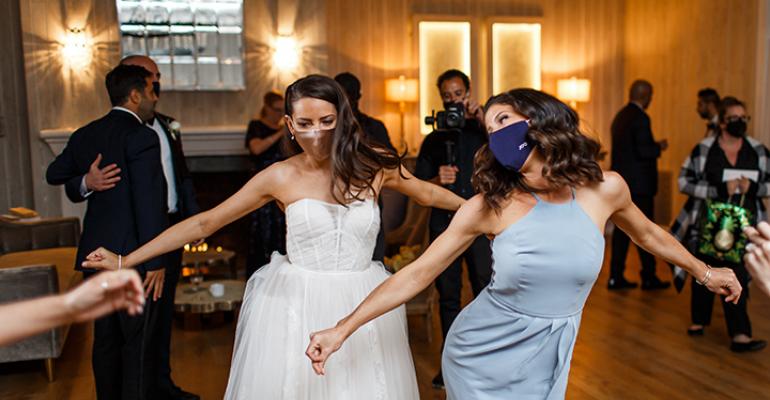 Start Slideshow ›
Events are once again allowed in California after over a year without guidelines.

The past several months has been exhilarating for many caterers and event planners around the country. They’ve been filled with a sense of excitement as their states opened back up and events were once again on the books. The same cannot be said for those in California though.

“I was so mad at how our industry was being overlooked,” said Alicia Falgano, with Alicia K Designs. “We were the first to go down and we’ll be the last to come back.”

For over a year, the California events industry has had to sit idly by and watch as their colleagues went back to business since events of all sizes continued to be banned in response to the COVID-19 pandemic.

“We’re here watching other states open and waiting for our turn,” said Emily Sallach, owner of California-based Events by Emily Kay. “Utah has some serious parties going on, and we can do the same things safely, but we weren’t able to. We could do a ceremony, but no reception. We could do champagne and cake in the backyard, but that’s pretty much it. It’s definitely been a roller coaster for sure.”

California was finally given a beacon of hope in April when the state’s health department released a set of reopening guidelines for private events, with the intention of having the state completely reopened by June 15.

“We were very happy to have received the guidelines, but the reality is they have so many holes in them–there’s a lot of assumptions that can be made,” Falgano said. “But it’s a start. Slow and steady, this is a marathon.”

Getting to the point where events can once again happen hasn’t been an easy road for California’s special events industry. Beyond the obvious struggle of staying afloat without business coming in, there was also the added burden of trying to lobby legislators to recognize how important the industry is, which gave rise to a number of lobbyist groups such as the California Association for Private Events (CAPE) and the California Events Coalition (CEC.) These groups included members from all sides of the industry–planners, venue owners, caterers, photographers, florists, DJs, etc. And they fought tirelessly to bring events to the forefront.

“Without movement at the state, we’re kind of dead in the water,” said Amy Ulkutekin, owner of Catalyst Creative Events and President of CAPE.

The lobbying efforts also served a secondary purpose for many as well.
“In terms of dealing with my angst and the state of the industry, starting the CEC was a blessing,” said Falgano, who is a member of the CEC. “I needed to take out my anger and angst somewhere.”

The guidelines that were released in April cover everything from table sizes to ventilation.

“One of the frustrating things is that the rules just keep changing,” said California caterer Dana Buchanan, owner of Primal Alchemy. “The challenge right now is what the public perceives for what they can and cannot do for events. We're super familiar with the guidelines, but they see the governor go on television and say that on June 15 we’re open, so they think that means huge events without masks.”
Obviously, the guidelines that were of the most interest to event professionals relate to capacities, mask mandates and testing, which vary depending on venues and which tier the state currently sits in (purple, red, orange or yellow.)

“The outdoor verses indoor thing makes sense, the number of people makes sense,” Buchanan said. “But now we’re having to jump through hoops and spend more money that we don’t have to adhere to these guidelines. But at least it’s not doomsday anymore.”

Even with the added guidelines and safety precautions that are being required for events in California, there are plenty of ways to have some fun with it such as handing out hand sanitizers and face masks as favors, delivering food and drinks via bicycle delivery service, and even beautifully decorated hand sanitizing stations at the reception.

“It’s a challenge,” Buchanan said, “but it’s about being creative and having fun with it.”

While receiving the guidelines was a big win for the California events industry, it wasn’t without its problems though.

“Our job is to keep our guests safe regardless of COVID, and now this has been increased by a million,” Falgano said. “There's a lot of liability issues at play here because we don’t know who should be doing what?
“Who's on first? Who's supposed to be doing what? There is a lot of chance to strain relationships that were already strained.”
Additionally, the vaccination requirements could potentially cause some headaches, Buchanan said.

“There’s this new battle of the vaxxed verses the non-vaxxed,” she said. “If you’re vaxxed, you can do whatever you want outside, but if people aren’t vaxxed, they get sequestered and it’s created this whole stigma that if you’re not vaxxed, you're a second-class citizen.”

Going forward, outdoor venues will become even more in demand than they already are in California because of the added flexibility when hosting events. However, this will bring increased competition among couples for availability.

“The easiest way to mitigate the risk is to keep it outside, but it’s going to be hard to find available venues,” Falgano said. “It’s going to take the planners and designers to get creative by looking at places that weren’t venues traditionally.”

A new way of business

Planning events in California will be fundamentally different going forward since there will need to be a lot more forethought, collaboration and extra planning up front to ensure safe and successful events.

“We're starting over, so now we have the opportunity to change some things,” Buchanan said.

On the venue side, there will be a lot more vendor vetting going forward.

“By vetting vendors, I was able to just call them to see what they are doing with COVID and if I wasn’t satisfied, I wouldn’t recommend them,” said Mallory Rydell, Site-Use & Special Events Coordinator at Rancho Los Cerritos in Long Beach.

For planners, they’re going to have to be a lot more involved in all aspects of the event, from table settings to servers to plating.

“I’m having to think about details that are typically outside of my framework,” Sallach said. “Catering usually falls under the catering realm, and I just hire them, but now it has to be a lot more structured.”

California is once again ready to party.

“Events really are the fabric of our society,” Falgano said. “The proof is in the pudding.”