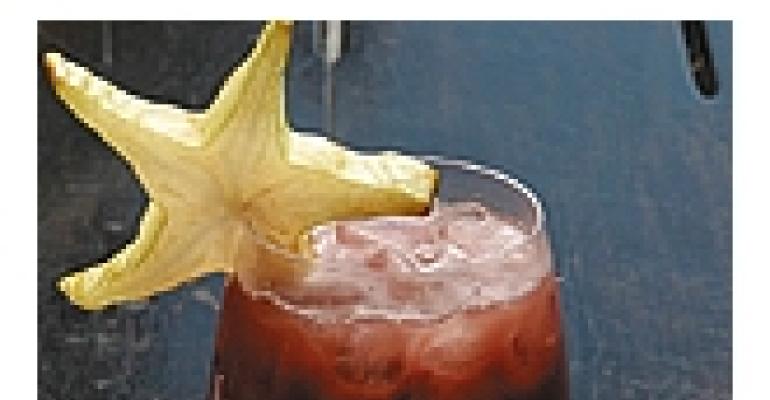 THIS month Special Events Magazine interviews cocktail connoisseurs from hot spot restaurants, bars and lounges with event space to spare. Most claim that a special event is no different than any other night at the bar; they are pros at taking care of big crowds with a big selection of intriguing cocktails. So read on to discover what's hip and happening when people hit the bar.

Peter Greerty, sommelier of Vietnamese restaurant Bong Su in San Francisco, says he sees “bartenders taking a culinary approach to their cocktails,” evident from their use of ingredients such as herbaceous spirits and syrups and flavored oils. Ryan Martinez, former bar manager of Los Angeles' J Restaurant and Lounge — which offers a contemporary mix of French and Italian food — has noticed a new attitude toward an old reliable: “Premium vodkas are going through the roof. They're really about 20 percent of the market, but they account for 40 percent of sales in a $4 billion industry.” In general, he believes, “People are going out and drinking less but spending more money on the quality of their alcohol.”

SushiSamba Rio also regularly uses the Japanese alcohol shochu, known as soju in Korea. “Shochu is a distilled alcohol similar to vodka, though it has flavor,” Tanguay explains. “It's a great mixer because it is lower in alcohol and doesn't hit you over the head like gin or vodka.” While shochu is a favorite among liquor licensees limited to lower alcohol content beverages, Tanguay uses it simply because he likes the taste. He stocks 33 different shochus — that's more variations than he has of vodka. One cocktail at SushiSamba Rio using the ingredient is the “Chu-cumber,” which contains muddled cucumber, shochu, the vanilla-based liqueur Licor 43 and fresh lime juice. This drink, Tanguay notes, pairs particularly well with the restaurant's lobster ceviche made with white soy and diced mango.

Since SushiSamba Rio is a restaurant-based event facility, Tanguay develops cocktails by assessing the restaurant's menu and how to complement it with a beverage's acidity, sweetness and dominant flavors.

Greerty points to his vodka-based “Bong Su Aperitif” as a food accompaniment because of its “wonderful aromatics” that complement Vietnamese food. “The addition of Prosecco {a sparkling wine} adds an effervescence that makes the cocktail refreshing,” he says. “Passion fruit adds that exotic element.” Another of his favorites is the Moscow Mule, which includes vodka, muddled mint and lime, topped with ginger beer. The last event he served this drink at was an outdoor party in nearby Napa Valley with a meal of grilled honeydew melon wrapped in pancetta, grilled peppers and onions with grilled tenderloin, and a wild boar and mushroom lasagna.

Cocktail trends are not just about what's new — old standbys also have a following. Chiang notes, “I see a shift back to classic cocktails instead of the over-sugared artificial drinks.” Greerty says he has noticed many versions of the Manhattan lately, while Tanguay notes that gin and rye are getting more play time at bars with drinks such as the classic gin fizz and the whiskey smash.

Chiang sees a reemergence of more obscure classics such as the Dominicana — made with Brugal Anejo rum, cream, chocolate and coffee liqueur — and the Airmail, consisting of rum, lime, honey and champagne. And Martinez notes the return of the French 75, which he calls “London's version of the mojito,” made with gin, simple syrup, lemon wedges and champagne. He also mentions J's “Havana Sidecar,” which he calls “a twist on an old classic. You use Cointreau as a sweetening agent rather than simple syrup or sour mix, and I use Grand Marnier, which is a cognac-based Triple Sec, but then I also incorporate rum and a little bit of pineapple and pomegranate.”

When hosting a special event with hundreds of people, Tanguay says he might consider having a “pre-mixed juice concoction that can be poured easily over ice,” but isn't afraid of more intricate blends for smaller groups. A favorite of his is the Samba Juice, made with various fruity rums and juices, including the Central and South American acai fruit, especially popular in smoothies.

A technique good for both special events and regular bar-going crowds is gussying up drinks with garnish and letting the color of the cocktails shine through clear glasses. Greerty favors the “Cool Cucumber,” which he describes as “a blistering yellow-orange color garnished with a long strand of the cucumber skin that has been formed in the shape of a ribbon and held together by a wood skewer.” For the ultimate display of colorful cocktails, SushiSamba Rio has 2-foot-tall “cocktail trees” that hold 12 glasses.

The Double Seven favors garnishes such as fresh mint, strawberries, black-berries, cucumber slices, candied ginger and pineapple. The restaurant also hand-cracks ice to top some of the drinks, Chiang says. “You take a cube of ice in the palm of your hand and crack it hard with the back of a spoon. If the ice is solid — like the Double Seven's, where we use a special Kool Draft machine that makes perfect solid cubes, and we freeze it twice — it should shatter.”