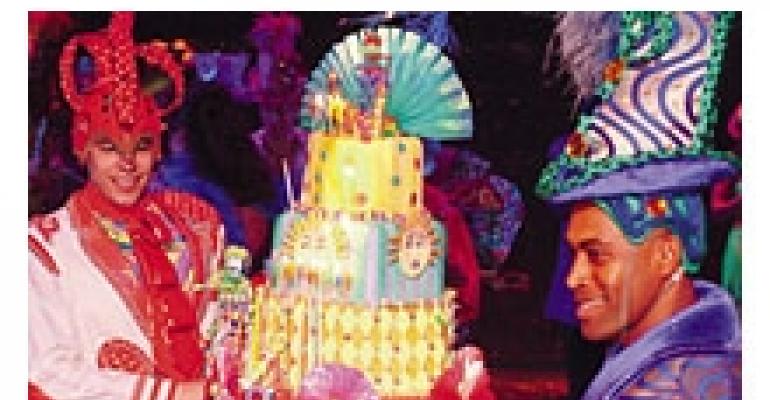 HERALDING a new decade in one's life can come in the form of a surprise party, a themed party, an all-about-me party and many more variations, depending on the honoree's preferences and personality. Here, five event producers share tips, trends and their favorite bashes.

Although milestone birthday parties aren't nearly as big a market as weddings and bar/bat mitzvahs, they are often big bashes.

“Usually the birthdays tend to be rather extravagant affairs,” John McPhee of Miami-based A Joy Wallace Catering Production notes. McPhee describes a cirque-themed 50th birthday celebration his company helped produce: “There were almost no limitations, everyone was open to a lot of ideas, and price was no object.” Frank Andonoplas, MBC, head of Chicago-based Frank, says that while it all depends on the client, he sees a new trend: “People with money aren't afraid to spend, especially on themselves.”

The ages 40, 50 and 60, all respondents concur, are the most popular decades to celebrate. Or, as Tony Conway, CMP, founder of Atlanta-based A Legendary Event, puts it, “When you have to start using hair color.” The common theme: “It's a celebration of life,” McPhee explains.

Few milestone birthdays take the form of a surprise party — instead, most honorees have a hand in the planning. According to Kimberly Merlin, president and owner of Lake Forest, Ill.-based Ex Floreus, “Almost all the clients are throwing it for themselves.” Conway agrees, noting, “There are not typically many surprises these days. More, the honoree is involved somehow.” He adds that a developing trend is flying an honoree's friend or friends of many years in from out of town, providing an element of surprise.

In fact, many birthday bashes incorporate out-of-the-ordinary components, to shock either the guests or the guest of honor. For a disco-themed bash produced by PJ Hummel, president of Tacoma-Wash.-based PJ Hummel & Co., the bathrooms got mod treatment. With a spinning mirror ball, sheer white drapes and holographic curtains, the bathrooms were, unexpectedly, “worthy of spending some time in,” Hummel says. Attendees of the cirque-themed 50th birthday bash catered by Joy Wallace had no idea what was in store for them; McPhee explains that the event began in the theater's lobby with a typical cocktail reception. For a 30th birthday celebration, Joy Wallace incorporated surprise skits to entertain guests. At a birthday/holiday/murder mystery party themed to the '80s — specifically the TV show “Miami Vice” — Santa's “murderer” was captured on the dance floor.

However, a few events deviate from the norm and stun the birthday boy or girl with a surprise soiree. A Legendary Event helped throw a surprise 60th birthday bash in November 2005 for a society woman in Atlanta. Since the woman missed her 1964 high school prom due to an illness, her son suggested the surprise birthday mimic a '60s prom. The gala eventually included gymnasium-inspired decor, retro food such as Cheez Whiz sprayed directly from the can onto Ritz crackers, guests attired in pastels with bouffant hairstyles, and a Little Richard impersonator. At one point in the night, “The principal of her high school came in and announced her as prom queen,” Conway says. “Every little detail was handled.”

Indeed, details about the birthday person and his or her life play an integral role in meaningful milestone celebrations. Conway reveals that the client “typically has some sort of sentimental idea.” It is then up to the event team to build on this idea to produce a stunning event. Hummel recalls the Studio-54-themed 40th birthday gala she created in May for a disco-music-loving woman. “We sent out a survey to all of her friends, so that the event's emcee, ‘Bobby da Bounca,’ could talk about her. She ended up asking {him}, ‘Do I know you?’” The venue, an “old, rotten cinder-block building,” according to Hummel, became a swanky club with a bubble machine, white leather sectionals, Bubble chairs and colorful lighting; performances by aerialists and go-go dancers rounded out the disco-themed night.

Joy Wallace designed the decor for the 30th birthday/holiday celebration that also took its cues from a past decade. To emphasize the '80s theme, the event team incorporated fluorescent-colored tablecloths with centerpieces of flowers, silver balls, glass vases and mirrored containers. Since the party featured both “Miami Vice” and holiday themes, pink flamingos and palm trees with “fronds” made of faux pine branches sat at the food stations and united the two concepts.

For a 12-course 50th birthday dinner that took place under a Tiffany glass dome in the GAR Rotunda of the Chicago Cultural Center, Andonoplas decked the dining table out in gold — the tablecloth, chairs, cushions, stemware and even the salt and pepper shakers were gilded in the traditional 50th anniversary hue. A “museum” honoring the client was constructed with two cases of “memorabilia from her first half-century on earth,” Andonoplas explains. He notes that while guests nibbled on Polish perogi and pear-and-Brie quesadillas, they gazed at significant items from the guest of honor's life, including her christening gown, sports equipment and family photos. “It inspired a real walk down memory lane for everyone in the room, as we made sure that there was something in the cases that each person was ‘related’ to,” Andonoplas says.

Birthday celebrants sometimes ask for a very personal present: They request an appearance by their favorite personality or performer. One of Merlin's clients, a woman who especially loves the Chicago restaurant Blackbird, threw herself a 50th birthday party in a Bedouin tent, complete with a first course from chef Paul Kahan of Blackbird. “The chef took everyone through three amuse bouche, explaining about each one and discussing the wine for the evening,” Merlin says. For the remainder of the night, the two-sided menu featured both the actual dishes — for example, one dessert was chestnut crepes with pears, ricotta and maple ice cream — contrasted with what the guests might have been offered had the birthday girl been left to her own devices, including a concoction of sweet apple Pop-Tarts with cheddar cheese. “The client has a sophisticated wine collection, and Blackbird is her favorite restaurant,” Merlin says. “All of these wishes were brought together for an unforgettable evening.”

Another client of Merlin's brought in comedian Jay Leno to entertain for one 50th birthday party. Guests enjoyed Leno's act while they sat on custom white overstuffed sofas and noshed on champagne, Perrier and caramel-cheddar popcorn. The event took place on the lawn of the client's lakeside property; dinner was served in a tent decked out in chocolate-brown and moss-green tones, Merlin says, “with three extraordinary chandeliers made of 18,000 dendrobium orchid heads.”

McPhee recalls that the cirque-themed event at the Gusman Theater in Miami went a step beyond entertainment and melded the meal with the performance. As a surprise for the guests, the dinner took place on a stage that had been built out to accommodate all the tables. Dressed in the same costumes as the acrobatic performers, the serving staff proved indistinguishable from the entertainers. To further integrate the guests into the action, the event team designed the menu around the acts “so the menu matched the performance,” McPhee says. “For example, after a balancing act took place in and around the tables, we had ‘balancing act fillet.’ We skewered and stacked the fillet with baby red potatoes.” Grilled shrimp hanging from a chive strand mimicked a trapeze act that took place over the tables; McPhee explains, “The menu meant something.”