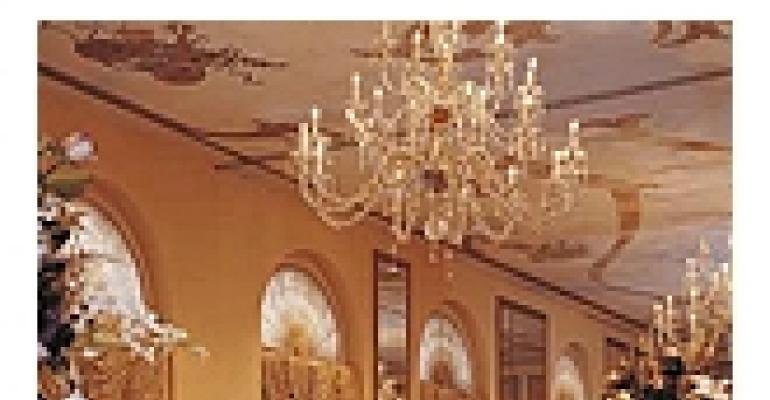 THE BUSINESS OF BANQUETS

HONORED BY THEIR industry for their achievements in design, production and food presentation, leading hotel catering professionals look toward future challenges in our annual “Catered Arts” cover story.

HIstoric significance, opulent decor and a reputation for fine food — courtesy of one of Dallas' top restaurants, housed on site — lure event business to The Adolphus Hotel. But Paula Fenner, director of catering and conference services and NACE 2004 Caterer of the Year, says she can't rest on the property's laurels if she wants to keep business brisk.

With weddings accounting for 65 percent of the property's catering revenue and 34 percent of its total revenue, Fenner has kept the lucrative sector squarely in her sights. That's meant maintaining great relationships with rental vendors, on whom she relies for a majority of nuptials, rather than simply offering the standard hotel stock that other properties do. Skokie, Ill.-based BBJ Linen, for instance, is on the table at 75 percent of social occasions on site, she says. Meanwhile, “beautiful china” frequently comes from Dallas-based RSVP Soiree.

But catering to weddings doesn't mean Fenner can afford to neglect the corporate side — not with 250 groups coming to the hotel each year, and convention services making up 55 percent of events.

Her biggest challenge as head of catering and conferences is balancing the two sides efficiently. The job, she says, has become increasingly tough, with conventions booking so late in the game — often a mere month in advance. On top of that, pharmaceutical companies and other corporate groups “are starting to book more Thursday, Friday and Saturday events,” she says. “That makes it very hard for weddings, especially if you have a great pharma company that needs the room on 24-hour hold.”

So what does an award-winning hotel caterer do? “You gamble,” Fenner says. “You look at history. You talk every morning as a group and determine what you do take and what you don't. It's important for the hotel, and for clients, that the catering director has been there awhile and understands the booking patterns.”

GROW WITH THE FLOW

Gambling of a different sort is one of the main draws at the Rio All-Suite Hotel & Casino. But it's far from the only one that keeps groups flocking to the Las Vegas property, says Michele Polci.

The senior catering manager for the Rio, awarded NACE's 2004 On-Premise Catered Event of the Year for its red and racy Temptation Ball, cites smart space expansion and an effective division of catering and convention duties as contributors to a significant growth in group sales. Business in the past five years has more than doubled, from $26 million in 2000 to $55 million in 2005.

In a city where size counts — the Rio serves an average of 25 1,000-plus-attendee meetings a year — the recent addition of 60,000 square feet of function space has helped Polci sell her property. More than merely gaining mass, she says, the hotel has grown in accordance with client demands. Before breaking ground on the expansion, “We went to meeting planners and said, ‘How can we accommodate you better?’” she says. Feedback indicated a demand for private, four-walled breakout rooms — rather than large air-walled ballrooms — so that's how the hotel laid out its new area.

To best serve the growing crowds, the Rio has implemented a system in which its convention staff acts as a one-stop shop: “They do sleeping rooms, function rooms, and food and beverage,” Polci says. That frees up the catering staff's time to take care of local events. “It makes you more accountable for your own market and groups,” Polci adds. “And guest satisfaction has been amazing.”

Another Las Vegas property, the two-year-old Ritz-Carlton lake Las Vegas, aims to use its far-off-the-Strip destination to lure groups. Grant Dipman — formerly with the Ritz-Carlton Naples, where his team won a Gala Award in January for Best Food Presentation — is leading the charge.

“We're on this beautiful lake, with beautiful mountains surrounding the property,” Dipman says. The goal of his department, he explains, is to showcase the natural surroundings to event clients and convince them that traveling 17 miles from the Strip to reach the hotel is a benefit, rather than a disadvantage.

The Ritz-Carlton is doing that by setting weddings in the 24,500-square-foot Florentine Garden, which includes fountains, lawns and arbors, and the elegant Pontevecchio Park with its picturesque bridge. For corporate groups, Dipman's department offers team-building activities such as triathlons, and just-for-fun ventures including jaunts to nearby Lake Meade and the Hoover Dam. As for those group clients who just can't resist the action, Dipman can have them spirited to the Strip via copter from the property's lakeside helipad.

True to its unconventional approach to the Vegas event experience, the Ritz-Carlton also is drawing on talent from off site. “My creative designer works with southern California vendors. Many times, they're able to do [what we need] better,” notes Dipman, naming lighting and linen as two areas where neighboring-state experts are heeding the call. As for food — the “forte” of Ritz-Carlton events, Dipman says — the hotel sticks to a tradition of excellence. “We use only the finest ingredients, and everything is made from scratch. We do it all à la minute, restaurant-style.”

For Steve J. Lawrence of Marriott's Orlando World Center — a Gala Award winner in January for Best Event by a Hotel Catering Department — the challenge is overcoming outdated perceptions of the convention-hotel event experience.

Food presentation is one area where his catering department crew is succeeding. Buffets, for instance, no longer get skirting or ruffled linens, but sleek alternatives like poly-covered legs and chrome, copper or stainless steel tops. Platters tend to be small and unmatched, “while individual portions are offered in fun ‘smallware,’ and multiple stations of made-to-order selections are used to insure freshness of product,” Lawrence says.

Even breakfasts and coffee breaks — not typically those conference events associated with innovation — are getting revamped. Creative to-go stations are turning up at morning meals, for instance, while breaks are stocked with string cheese, Slim Jims and other low-carb edibles. Also, “For coffee breaks, we have cut the top off our SECO carts and placed spandex and a metal top on them for a great, clean, efficient presentation,” he adds.

At the same time that he's focusing on smaller service ratios — one to 15 at dinners, for example — and a less institutional, more intimate event experience, Lawrence must keep the big picture in mind. And we do mean big. With 2,000 sleeping rooms, nearly 400 catered events a year and $35 million in annual catering sales, the Orlando World Center is Marriott's largest hotel, and a major player in the Orlando corporate event scene. To stay competitive in the market, Lawrence says, the hotel has to balance customized event service with constant growth. “We have 215,000 square feet of meeting and event space, and we're adding another 100,000 in 2007,” he says. “Space is the No. 1 thing groups are looking for when they come here.”

“Hot and cold food presented on the same plate. For instance, pancetta-wrapped figs, roasted and placed on an arugula salad with gorgonzola vinaigrette. Also, comfort food with a twist, like a gourmet grilled cheese sandwich station with artisan bread, or mini burgers of lamb and venison with apple or fennel slaw on brioche mini buns.”
— Steve J. Lawrence, Orlando World Center Marriott

“Crab-and-shrimp cakes, which we've become famous for because of [in-house restaurant] the French Room. We serve them as hors d'oeuvre in white ceramic spoons with a tomato coulis and a lobster-ginger sauce.”
— Paula Fenner, The Adolphus

“Food that's familiar — people still want that. We might still do the filet and chicken, but we'll use an airline chicken breast to give it height, and instead of baked or oven-roasted potatoes, we'll do something layered with red potatoes and gold Yukons to give it texture and color.”
— Michele Polci, Rio All-Suite Hotel

“Action stations where we make everything from scratch. Instead of bringing out pasta and throwing it in a chafing dish with sauce, the chef will stand behind the station making fresh pasta. Or we'll do a station where we make gelato right there.”
— Grant Dipman