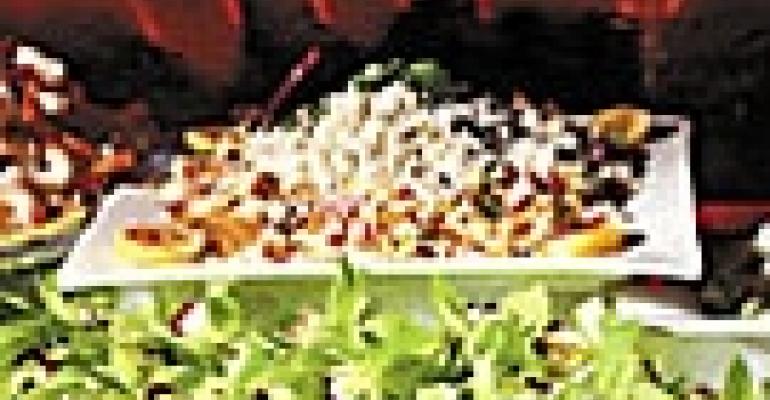 WHEN GARY ARABIA set out to find space to prep food for BMG's Grammy Awards party at New York's cool-but-kitchen-less Gotham Hall, little did he know he would discover a life-changing relationship. But, says the owner of Los Angeles-based Global Cuisine by Gary Arabia, that's exactly what happened.

“Normally, when working in New York, I'll find a kitchen within proximity to the venue,” Arabia explains. In the case of the music company's February post-awards bash, none was available. On top of that, Gotham Hall's Broadway location meant Arabia could not bring in the 40-foot mobile kitchen he often uses for off-site events. Luckily, a friend clued the caterer in to the Women's Housing & Economic Development Corp. — a Bronx-based organization that offers an on-site culinary-arts training program for low-income students, housed in a fully outfitted commercial kitchen. It was when Arabia met Alberto Tirrito, director of the Urban Horizons Center for Culinary Arts at WHEDCO, that good things started to happen.

“I fell in love with the facility,” Arabia says. “But what was really impressive was the attitude of the young people being trained, and of the instructors. I said to myself, ‘This is it. I've found a home.’”

So taken was Arabia with the trainees at his temporary digs, he decided to take them on as culinary staff for the big night.

On event day, WHEDCO students joined members of Global Cuisine's crew in Gotham Hall's staging area to put the finishing touches on a menu of elegant eats for the music industry's elite. Together, the crews assembled a selection that included smoked salmon Napoleons and oysters with osetra caviar. During the event, the team kept the goodies coming as stars such as Eminem and Diana Ross partied beneath Gotham's stained glass dome in a space dolled up for the occasion by designer Michael Venedicto of Los Angeles-based XM Style.

Not only was the Grammy party a smash, according to Arabia, but WHEDCO has left a lasting impression on him. “I'm lucky. I celebrate people's moments, and my client base is remarkable,” he says. “What they do is change lives.”

Among lives changed is Arabia's, as the chef has hired a WHEDCO trainee as a full-time employee — moving the former student and his family out to the West Coast from New York — at the same time vowing to help the organization raise much-needed funds to continue operation.

That ongoing commitment is one reason Tirrito not only calls the Grammy party experience “very rewarding for the students,” but also deems the bond with Arabia “the most fruitful relationship in a long time for WHEDCO.”