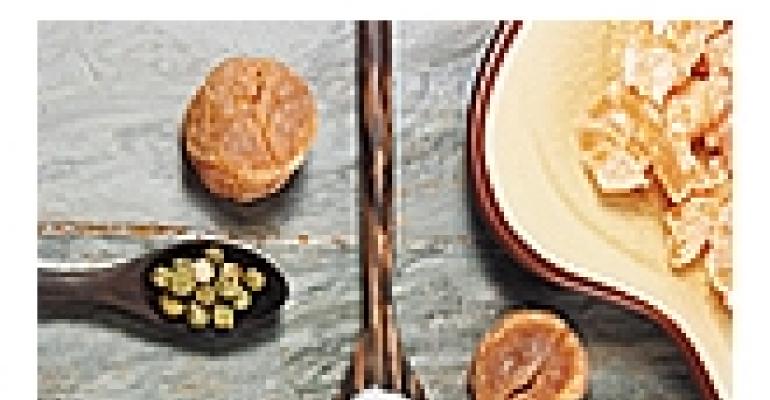 FROM tortillas to tapenade, ethnic food is everywhere these days. Bryan Nelson, general manager of the Seattle arm of Catering by McCormick & Schmick's, notices acceptance of other cultures' culinary offerings in what he calls “the bread revolution”: from European baguettes, focaccia and ciabatta to Armenian lavash and Asian panko breadcrumbs. According to Nelson, this surge in interest can be traced to such sources as The Food Channel, the Internet — which provides “thousands of recipes at your fingertips” — and even local grocery stores that supply a more diverse selection than they did 10 to 15 years ago. Martha Stamps, executive chef and proprietor of Nashville, Tenn.-based Martha's at the Plantation, credits “lighter, healthier diets, emigration and travel” for the big ethnic food boom. Whatever the reason, the desire for outside-of-the-norm, creative culinary concoctions is at an all-time high, giving caterers an opportunity to expand their repertoire while the increasingly food-savvy public tests its palate.

Stamps cites her favorite “ethnic” menu as Southern-themed — often called “regional” rather than “ethnic” but still foreign to many. While she does see trends “moving toward more exotic Asian-inspired food,” she also notes a movement going “back to homey, comfort and Southern foods.” For a backyard wedding with a fish-fry theme, Stamps served field pea salad, fried corn, squash casserole, sliced heirloom tomatoes, okra fritters and deviled eggs. And her all-time favorite culinary creation is quintessentially American and a novelty to both natives and those outside the U.S.: a variation on the traditional s'more with homemade graham crackers dipped in chocolate and filled with marshmallow ice cream.

Certainly, what's “ethnic” food to one person is the norm to another. For example, because Waters Fine Catering is located in border-city San Diego, Spurgin says he “tends to do a fair amount of foods from Mexico and Latin America because it's part of our regional culinary culture.” Waters Fine Catering serves items such as cedar-grilled chile-honey glazed salmon brushed with ancho chile as well as sweet white corn and black bean salad seasoned with mild garlic, shallots and toasted cumin.

While some caterers tweak the familiar, others take the plunge and experiment with dishes less common to their region. Susan Jaffe, the associate vice president of catering at Lincolnwood, Ill.-based Food For Thought, which serves the Chicago area, cites as menu items Mexican recipes such as chicken tinga turnovers — traditionally a slow-braised meat dish, in this case, tucked into a flaky pastry pocket — and duck taquitos with Chihuahua cheese accompanied by a tangy tomatillo cascabel-chile salsa. Nelson mentions the Filipino dish kilaw, which he says is similar to ceviche “where you're taking a tilapia or a whitefish, and you're adding different flavors: lemon, onion, coconut, garlic, ginger, tomatoes, pepper, and you're cooking it in those juices.” And he likes having servers describe the history of a food to guests, which “involves them in something they haven't tried before or they didn't know about,” he explains. “Then you've educated a person beyond having them eat something.”

Despite their appeal, cooking exotic foods can bring challenges for caterers. Jaffe and others say “locating many of the more exotic ingredients can be difficult.” Further, it can be tough to determine just how adventurous the party-goer's palate will be.

For example, Nelson mentions he and his staff often debate how “authentic” to make a dish. He cites an example where a Filipino chef joined the staff and started making a dish in the true Filipino style, but the authentic version wasn't as well received. He admits, “It's tough sometimes, that balance,” and says caterers have to think about “flavor profiles that people expect.”

Other quandaries can crop up since caterers must keep in mind the religious constraints in certain cultures. Nelson says when his company offers a “halal” menu, which he describes as “similar to kosher” and corresponds with Islamic dietary practices, they have to make sure they're “not using alcohol and that everything is meeting certain religious standards.”

Other problems can be more comical. Stamps describes a caterer's nightmare: “I made a ton of fresh spring rolls in rice paper once that all stuck together and tore when I pulled them apart!” She cautions, “This is obvious, but it's always best to try new recipes on a smaller scale before you serve {them} at a big event.”

With ethnic food comes the corresponding platters and paraphernalia for serving it. “I now have 300 really nice individual paella pans direct from Spain; it's amazing what you can serve in them aside from paella,” Spurgin says. “Think bouillabaisse with a lovely chilled glass of Bandol rosé.” He also mentions the time a client wanted a Moroccan restaurant theme. Waters Fine Catering satisfied the customer with “costumed servers, over a hundred pillows, fire pots, cool serving platters and classic mint tea served on traditional trays.” He adds, “I think we got them with the ‘Lawrence of Arabia’ music and a fez for everyone upon entry!”

Another full-service food-and-decor fête comes from Food for Thought, where the event team re-created “a traditional English pub for a couple's wedding reception to honor the groom's birthplace and background,” Jaffe says. “The tent was transformed with suede-cushioned chairs, tablecloths imported from India and English bone china.” The menu consisted of traditional mulled wine, Scotch quail eggs, Cornish pasty turnovers and “devils on horseback,” or oysters wrapped in bacon. The dinner began with a flight of English beers, continued with a first course consisting of a trio of English game terrines that included duck, rabbit and one of Cornish game hen mousse, accompanied with whole-grain mustard, cornichons and pickled onion, and then was followed by an entree of bangers and mash.

With the public becoming more familiar with foreign foods, caterers will need to explore even more ethnic-food avenues. As Spurgin says, “You never know how you may put your spin on a dish.” His advice: “Immerse yourself in an ethnic experience, and don't be afraid to try new foods. Like Mum said, ‘Just have one bite.’”