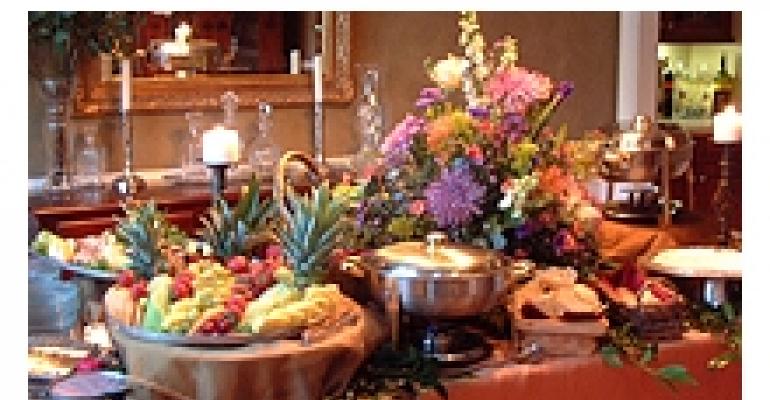 THE FLAVOR OF FUN

According to Victoria Duke of Sacramento, Calif.'s Capital City Catering, demand for theme-appropriate cuisine has grown dramatically in recent years. A decade ago a “theme event meant decor and music while {the menu} would still offer the same chicken and beef fare,” she says. But these days, “Caterers are looking for food trend ideas to actually create a theme around.”

Whatever the theme demand at hand, Duke says Capital City has responded with party-perfect menus that take their cues from regions, seasons and even popular culture. One such menu is a “Charlie and the Chocolate Factory” feast that the catering operation created for an event based on the popular film and children's book. Featuring playful hors d'oeuvre such as smoked salmon lollipops, mushroom-filled pastry “bubbles” passed by a bubble-blowing server, and “Wilbur Wonka's Cranky Crab Cakes” served with lemon aioli, the menu used color and character references to beguile guests. Standout examples included “Violet Beauregarde's Blueberry Spinach Salad,” “Veruca Salt's ‘Daddy I Want’ Turkey,” and — for the story's notorious glutton — “Augustus Gloop's Parmesan and Butter Mashed Potatoes.” Dessert highlights included Hostess Twinkie, Ding Dong and Ho Hos “trees,” as well as a cascading chocolate fountain and glass fishbowls filled with candies.

For chef Andrew Brackner of Atlanta's Talk of the Town Catering, the growing popularity of themed food has everything to do with the rising profile of events in both corporate and social circles. “Now more than ever, everyone wants to outdo the last party,” he notes. And no themes are hotter among his clients, he says, than those that take their inspiration from Atlanta's sultry Southern setting.

Talk of the Town's “Spring in the Garden” menu beats the heat with fresh seasonal bounty, including a stone-crab, artichoke and cucumber salad with spicy pineapple vinaigrette, and a chilled gazpacho sweetened by honeydew melon, coconut milk and honey creme fraiche.

As the weather cools, Talk of the Town might turn out a “Fall in the Appalachian Foothills” theme menu featuring an earthy terrine of forest mushrooms and wild tarragon, followed by an entree of pan-seared venison filet with bacon-and-onion-flecked Brussels sprouts and apple-sage compote.

“I believe that theme parties which are directed toward a region and season will last long past the ‘Hollywood players’ themes,” Brackner says. “Menus like ‘Tuscany in the Spring,’ ‘Maine Summer Boil’ or ‘Caribbean Island’ will be fashionable forever because the indigenous ingredients you would use are in their peak season. Combine this with a little garnish, some flair and basic culinary knowledge, and you have a sure sale.”

In Los Angeles, where a south-of-the-border influence is everywhere, “Latin fusion” theme menus are all the rage, reports Michel Euliss of the city's Gourmet Celebrations. The marriage mates “sauces and essences from France and other parts of Europe with Latin ingredients — not just from Mexico but also Ecuador, Spain, Cuba and other countries,” he says.

Gourmet Celebrations' fusion menus include such hors d'oeuvre as red snapper ceviche with ginger, lime and chiles, along with chipotle shrimp quesadillas with smoky black beans. On the station side, diners might find watercress, jicama and orange salad with manchego cheese and toasted pepitas, while plated entrees include tequila-and-lime baby back ribs with roasted chayote and grilled corn.

While flavors tend toward spice, citrus and smoke, presentations are all about hue and height, according to Euliss. “With tray-passed hors d'oeuvre, we're laying finger foods on designs of multicolor dried beans,” he says. A buffet, meanwhile, might appear in the form of a vertical board, with holes cut out to hold duck-and-brie taco “cones” rather than traditional folded-over tacos.

In all cases, no matter how cheesy or juicy or crumbly the featured fusion food, “We make it user-friendly,” Euliss says. “Non-greasy and non-dribbly.”