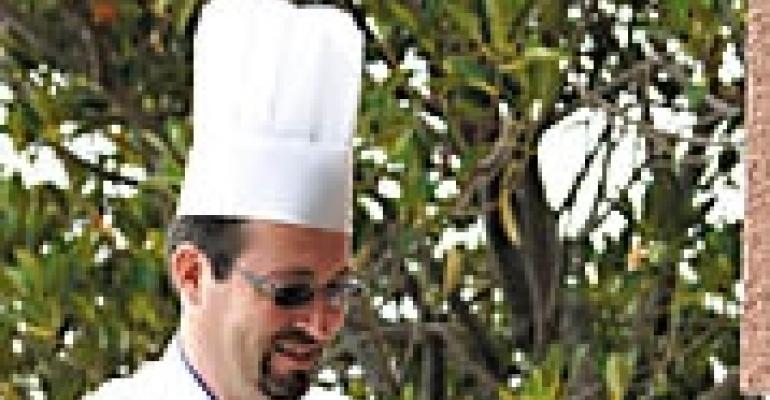 FOR STEPHEN CUMMINGS, breakfast is more a state of mind than a time of day.

According to Cummings, executive chef at Loews Coronado Bay Resort, San Diego, “Breakfast is later and later these days. People may get up at noon, but they still want breakfast.” And his sophisticated event groups “want to see action stations. They like to interact with the chef; the days of the old chafing dish filled with scrambled eggs are gone.”

Event guests see plenty of action at the 440-room property, with station cooks preparing a range of dishes that push breakfast foods far past the traditional tidbits. Popular dishes include breakfast pizza (with pesto, basil, fresh tomatoes and mozzarella, as well as versions with bacon or chicken-and-apple sausage); breakfast pastas (pasta with scrambled eggs thickened with reduced cream and seasoned with tarragon); breakfast sandwiches, such as a croissant version with smoked salmon and a poached egg; and even a breakfast pretzel, filled with apple, honey and cinnamon.

Because the property is so close to the Mexican border, Cummings often keys on a Mexican theme, offering dishes such as breakfast burritos (eggs wrapped in cilantro or sun-dried tomato tortillas) and breakfast quesadillas (stuffed with cheese and either chorizo or bacon, as well as a vegetarian version).

The critics approve of the Loews approach — “We've won ‘best Sunday brunch’ [from the local restaurant association] for four years in a row,” Cummings notes.

The breakfast buffets at the Naples Beach Hotel & Golf Club, Naples, Fla., are so lavish that they command check averages on par with or even higher than plated breakfasts, notes food and beverage director Jim Anderson.

The 318-room property, perched on the edge of the Gulf of Mexico, capitalizes on its location by studding its breakfast buffets with fresh local fruit — such as carambola, mango, guava and passion fruit — along with orchids from the orchid house on the property. Dudson china in five different colors adds a lighthearted touch to the property's high-end silver chafers and serving pieces. Continental buffets can be as basic as muffins and bagels with fresh-squeezed juice, but entree options abound, including breakfast croissant sandwiches, curried egg sandwiches, cheese blintzes and mini quiches. “We will run all kinds of different ideas as they come along,” Anderson says.

Those with any room left can try to squeeze in some wedding cake.