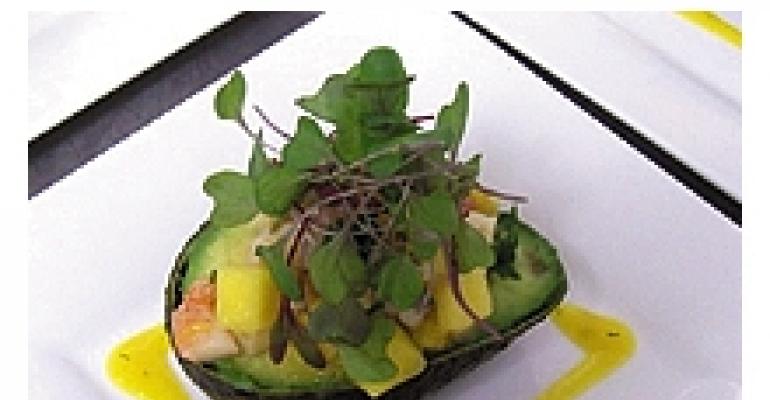 ELGIN Woodman, chef de cuisine of A Joy Wallace Catering Production and Design Team in Miami, claims, “I'm not an artist. I just think the actual ingredients make food beautiful.” Despite her modesty, food presentations are becoming increasingly artistic — from towering cakes to simple, colorful presentations — and many food fans credit chefs. Yet, eye-catching food serves a practical purpose as well. As David Feys — president of Victoria, British Columbia-based Feys & Hobbs Catered Arts — says, “Presentation is the first contact you have with guests at an event.”

Just as different artists have different styles, chefs too have personal preferences when styling food. Feys says presentation trends have gravitated toward “items that are composed, so guests can see the individual ingredients and architecture of the food.” One of his creations includes an Asian prawn and papaya cocktail, which he describes as “panko-crusted tiger prawns supporting a pair of chopsticks vertically standing in a bed of seasoned papaya salad in a martini glass.”

Woodman, on the other hand, claims she's “over the food in the martini glass,” thanks to a period when her company continually asked, “‘What can we put in a martini glass?’” She favors presentations that are clean and simple. For example, an avocado salad she made for a fundraising gala dinner for the Conservancy of Southwest Florida in Naples, Fla., included an avocado half filled with shrimp salad tossed with mango and pineapple in a lime-ginger marinade and drizzled with mango puree.

While Woodman favors low-to-the-plate presentations, executive chef Domenic Chiaromonte of Match Restaurant and Event Venue in Woodbridge, Ontario, believes in height. A dessert he calls “Flo” includes a three-layer chocolate mousse — dark, milk and white chocolate — below a 5- to 6-inch tower of cookies set at different levels that “act like little ramps,” according to Chiaromonte. The dessert, which has been served to a party of 250, comes with a shot glass of caramel that the guest pours on top of the cookie tower; the sauce then flows into the mousse. He won the International Caterers Association Catie Award for best plate presentation in 2005 for the dessert.

Another fan of towering creations is cake designer Janelle Paige of Layers Cake Design Studio in Sherman Oaks, Calif., who says, “You've got to fill the space” of a venue. A woman of her word, she once made a cake that soared some 7 feet high. And while Paige works with weddings 80 percent of the time, she also makes party cakes that turn conventional cake decoration on its ear. One of her cakes she describes as “a Candy Land game come to life.” While others might create the castle for this cake using ice cream cone turrets, Paige fashions cake itself to resemble the cone turrets. “Gumdrop” paving stones are made from iridescent, colored fondant coated in sugar, and as a final touch, cotton candy serves as clouds.

Inspiration for food presentations strikes in both likely and unlikely places. Woodman cites her surroundings, such as the walk-in cooler or the supermarket, while Feys notes, “A client's words will trigger a picture in my head.” Paige seeks out inspiration by traveling, going to museums or looking at art magazines for cake design ideas. However, she avoids cake decorating magazines because she says they stifle her creativity rather than stimulate it. Other sources of inspiration: “I tend to go to showcase houses and look at how they drape their fabrics, or I'll go to the Getty [art museum in Los Angeles] and be inspired by the texture of granite.” Chiaromonte cites unusual sources as well: The Home Depot hardware store has given him ideas for food vessels, and his son's water toy inspired his “Flo.”

ALL IN THE DETAILS

Feys uses his line of house-made preserves, salad dressings and chutneys on his food to “contribute a signature flavor and promote the items as an after-party sale.” He says right now he's doing a lot of hors d'oeuvre parties, and the appetizers “have to look good and be very flavorful because each one acts like a business card.”

For added dashes of color, Chiaromonte favors colorful oils, reductions and popcorn seedlings, the latter he describes as having “really bright, bright yellow leaves. It's actually what comes out before it develops into a husk.” He also uses unusual vessels: “Imagine a tulip that looks like a glass, and there's five of them in a row. You're meant to put a candle in there, but we put lobster-and-fig spring rolls in [four], and in the middle, I actually do put a candle.”

Paige likes to “carry out whatever the theme is of the cake onto the table.” For example, for a sandcastle wedding cake, she'll put white chocolate seashells and edible “sand” made of sugar and crushed graham crackers on the table so “it looks like a story.” For a cake made to resemble a club sandwich, she might scatter on the table some white chocolate sculpted into “potato chips” — either ridged or plain. The sandwich includes “Swiss cheese” — with the requisite holes in it — made from fondant, which bends to “look like it's melting.” Fondant “tomatoes” have a gelatin middle with little “seeds” piped in, and “pickles” also are coated with gelatin “so they look very wet,” according to Paige. In fact, Paige's creations are so realistic that sometimes they look less like cakes than they do the objects they emulate. She says she likes clients to wonder, “‘Is that real, or is it fake?’”

Certain trends remain hot, such as the visual impact of a row of spoons with bites of food. In fact, Feys serves an entire entree shrunk to hors d'oeuvre size to fit the spoon with his short-rib cutout on mashed potatoes.

Woodman notes the food receptacle has seen drastic changes lately. She says, “It's not round anymore; it's square, rectangular.” She also notes the changing quality of disposable products, saying, “The plastic is not that cheap-y plastic — you almost think it's real.”

“A lot of culinary is going toward a scientific look,” Chiaromonte adds. For example, he serves a tenderloin steak with three au jus in test tubes: lychee, Merlot and shiitake. He also uses a pipette, which he says is “like an eyedropper,” as a skewer. When pipettes serve as chicken skewers, guests bite off the chicken and “squeeze the tube, and all the juice goes in their mouth at the same time as the chicken,” according to Chiaromonte. He adds, “Sometimes we're even using syringes with soup — minus the needle, obviously.”